CES 2014 held recently at Las Vegas has put a couple of things beyond any doubt. First, the age of wearables is officially upon us and it is only a matter of time before we get almost every bit of our clothing digitised and smart. Second, with the Steam Machines and Playstation Now, gaming, whether console or PC, is going places it hasn’t gone before -- Prasid Banerjee

Another year, another international CES gone, and just like every year, this year saw quite a few new gadgets as well. From open source to proprietary to prototypes, they were all there. Surprisingly though, the number of new smartphones and tablets unveiled at the event was very low, the void hence created being filled by wearable devices. The CES 2014 was about three things this year, wearable tech, gaming and digitising your home. We take you through a short tour of CES 2014 in case you have missed out on anything.

Smartphones and tablets
Most technology experts expected this year’s event to go comparatively dry on the smartphones segment, but almost no one expected it to be this dry. Perhaps the only device worth mentioning would be the Sony Xperia Z1 Compact. This is a smaller version of the company’s flagship Xperia Z1 smartphone, but packs the same 20.7 megapixel camera on the back. 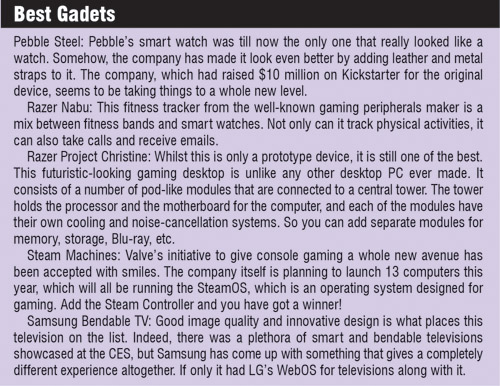 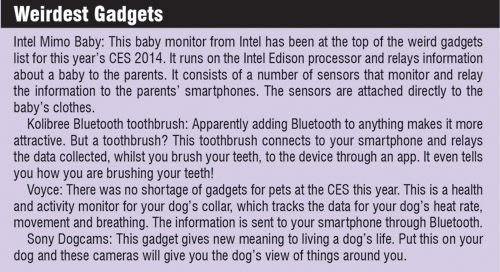 In the tablets segment, we picked two that are worth mentioning. These include the Asus Transformer Book Duet and the humongous Samsung Galaxy Note Pro tablets. Whilst the former is a dual-boot (Android and Windows) device, the latter is a 31cm (12.2-inch) Android-based tablet. There was also the Micromax LapTab dual-boot device unveiled at the event.

But that’s about all that we have to say in this segment, which brings us to wearable devices.

Many people say that the Pebble smart watch is the only true smart watch in the market. This is because it is the only one that really looks like a watch. Well, the company seems to have been taking notes, the Pebble Steel Smart watch adds both steel and aluminium straps to the device, making it look more like a regular watch, whilst retaining the features of a smart watch like getting email, calls, etc.

Also, the sub-segment of the smart watch, fitness trackers, had quite a few to show as well. The Nike+ FuelBand SE led the pack with its waterproof and easy-to-use features. But close second was Fitbit Force, which is just as useful, but you will have to take it off when you are taking a shower. LG also showcased a fitness band at the event and there was the Jawbone Up24 sleep tracker as well. The sleep tracking feature is also available in Fitbit Force.

To close, it is worth mentioning the Vuzix M100 Google Glass-type device along with the MetaWatch Frame smart watch, which takes an open source approach for development purposes.

Televisions
There were no plasma televisions at the CES this year, but the segment was dominated by LED, LCD and OLED TVs. 4K is the talk of the town and whilst the big question still is whether people really need these TVs or not, it is safe to say that sooner or later most will own one. This is because companies will stop producing anything else.

Anyway, we have to start with the Vuzix Reference Series, which the company says is the ‘best TV in the world.’ Boasting a 4K resolution, the TV has reportedly outperformed some OLED, plasma and LED LCD models from Samsung, Panasonic and LG, respectively.

Next on the list would be Panasonic’s new curved television. Unlike other curved TVs that we have seen so far, this one curves both ways. But, it is perhaps safe to say that it is going to be too expensive, at least for the average Indian consumer’s home. Still, it is worth a mention.

Sony and Toshiba also joined the fray, showcasing high-end televisions like the XBR by Sony and two other series by Toshiba.

This is perhaps the segment that made the most noise at the CES this year. We will have to start with Valve’s innovative Steam Machines. Whilst Valve, which is behind iconic games like Half Life and Counter Strike, did not showcase any Steam Machines of its own, there were over a dozen third-party Steam Machines put on display. These machines aim to bring computer gaming to the living room like never before.

Next up is the Razer’s Project Christine that showcased a bizarre-looking modular gaming PC, which comes fitted with a custom motherboard and mineral-oil cooling system. Equally impressive is Oculus VR’s Crystal Cove prototype, which is a virtual reality-based headset. It turned quite a few heads at the CES this year.

Further, when the recently launched Sony Playstation 4 and Microsoft Xbox One appear at the bottom of a gaming roundup, it tells you how big everything else in the segment was. Not much to tell about these two either, except Sony’s Playstation Now game streaming service. This was a major announcement for gamers, which won Sony quite a few points and perhaps even fans.

The author is a correspondent with EFYTimes.com