What’s New In The Latest Microcontrollers?

Targeting the simple application tier, microcontroller (MCU) vendors continue to drive their products to break new limits of cost, current drain and size, while adding features to ease development, hoping to entice embedded system developers. What do the latest MCUs offer this year? Let us take a look.

IoT-targeted MCUs
“New or established, every semiconductor vendor needs a new paradigm to solve four critical issues in the Internet of Things (IoT), namely, design time, differentiation, time to revenue and design cost,” explains Alexandru Voica, senior technology specialist, Imagination Technologies, in an interview with EFY. He adds that, in the IoT market, consumers have high expectations; devices need to be affordable, power-efficient and must work out-of-the-box.

IoT-targeted MCUs look mostly at network connectivity in the form of wired (Ethernet) or wireless (Wi-Fi, Bluetooth or others), lower power and a wide range of sensors like temperature, motion or humidity.

T. Anand, managing director, Knewron, says, “I would bet mostly on addition of communication standards like Wi-Fi and Bluetooth Low Energy (BLE). An upcoming chip from Espressif Systems has both Wi-Fi and BLE put together in one system on chip (SoC), ESP32, which could be another game-changer.”

Ingenic M200 is another good example of an innovative SoC built from the ground up for wearable devices. It implements a power-saving hardware architecture where a high-performance microprocessor without interlocked pipeline stages, having a central processing unit (CPU) clocked at 1.2GHz, tackles most of the heavy-lifting, while less-demanding tasks are handled by a secondary low-power 300MHz MIPS CPU. 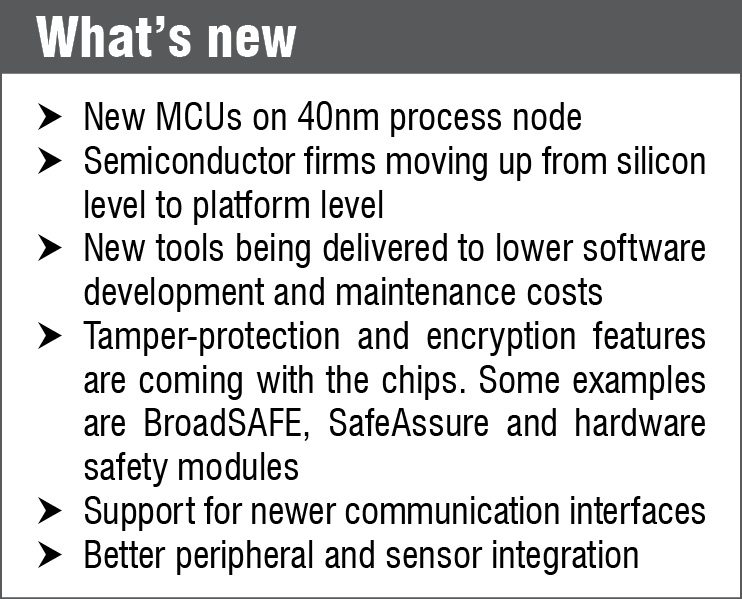 However, Aravind Navada, senior engineering manager, Integrated Systems and Transceivers Group, Analog Devices, India, has a very different perspective. He says, “In my opinion, there is no such thing as an IoT-targeted MCU. MCUs in general are an integral part of IoT use cases. While the IoT encompasses a lot of applications (both battery-powered and line-powered), MCUs in the future would see integrated connectivity (both wired and wireless).” 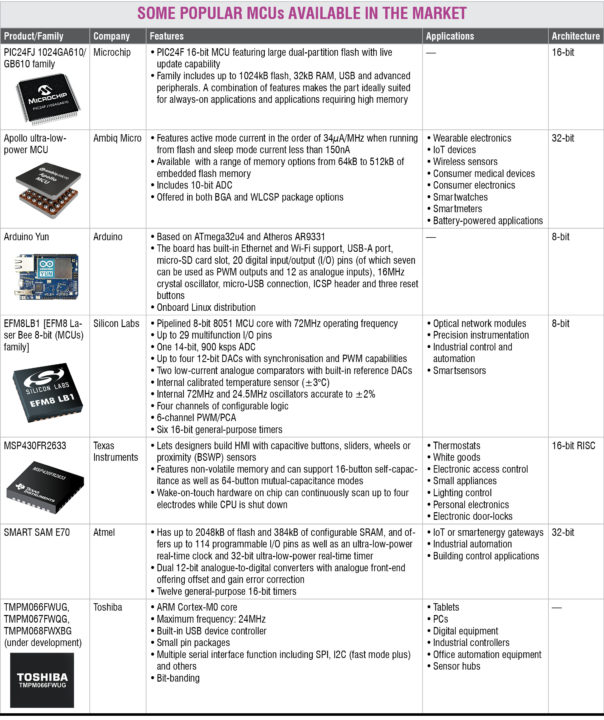 Rise of Type-C
Navaneethan Sundaramoorthy, co-founder and CMO, Uncanny Vision Solutions, explains that the most exciting feature for him in the last 18 months has been the introduction of universal serial bus (USB) Type-C interface in MCUs from Cypress, Texas Instruments, NXP and others. “While USB Type-C has just entered the market in late 2015, it is going to rapidly reach more than a billion consumers within the next 18 months—starting with smartphones, personal computers and tablets,” he says.

“USB Type-C is the biggest change in USB interface and, as described by many industry observers, it will soon be the one cable to rule these all. With its ease of use through reversible connections, higher power-carrying capability and flexibility to carry multiple types of data (video, USB, etc), it is going to pervade lots of electronics,” Sundaramoorthy adds.

Packing high-end performance
Baikal-T1 processor is the first Russian offering for the communications market to use a MIPS P-class Warrior CPU, boasting highly-competitive properties in terms of performance, technology node and compatibility.