With electronic devices becoming faster and smaller, their sensitivity to ESD is also increasing. Therefore it becomes important to understand the fundamentals of prevention and control of ESD before planning to buy ESD safety solutions -- Ankit Gupta

Despite huge efforts put in by electronics industry in the past 25 years, electrostatic discharge (ESD) still affects production yields to a great extent and in turn reduces profitability and product quality.

Various studies around the world reveal the fact that the reason for damage in 60-90 per cent of defective devices is ESD. Seventy per cent of these failures are attributed to damage caused by ungrounded people. The cost of damaged devices, shipping, repairs and rework can be so high that it consumes the entire profit margin of a project. It is highly unlikely that any organisation which ignores ESD safety will be able to successfully manufacture and deliver undamaged electronic products.

ESD susceptibility symbol. The well-known ESD cautionary symbol comprises a yellow hand in the act of reaching, crossed by a bar, all within a black triangle. It intends to identify devices and assemblies that are susceptible to ESD and so the personnel should be grounded when un-packaging or handling them. The symbol should be used on assemblies and devices that have sensitivity towards ESD.

ESD protection symbol. This symbol appears on ESD protective products such as shielding bags and boxes. The asterisk sign is replaced with a letter indicating the primary function of the item such as:

‘L’ for low-charging materials. These materials are also known as astatic or antistatic materials. Packaging using such material minimises charge generation by separation from or rubbing with other materials.

‘S’ for shielding materials that act as a barrier or an enclosure that limits the passage of current and attenuates the energy resulting from an ESD.

‘D’ for dissipative materials with surface resistance between 1×106 ohm and 1×1012 ohm.

‘C’ for conductive materials with a surface resistance between 1×103 ohm and 1×106 ohm. 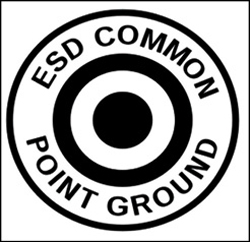 It is important to understand static electricity in order to prevent and control ESD. Static electricity is an imbalance of electric charges within or on the surface of a material. The charge remains until it is able to move away by means of an electric current or electrical discharge. ESD can change the electrical characteristics of a semiconductor device, degrade it or even destroy it completely. This static charge build up is majorly caused by tribocharging and electrostatic induction.

Tribocharging. Creation of electrostatic charge by contact and separation of materials is known as triboelectric charging. The atoms of a material without static charge have an equal number of protons in their nucleus and electrons orbiting the nucleus. The atom in this state is electrically neutral.

Somewhere in the middle of the list are materials that do not show strong tendency to behave either way. Note that the tendency of a material to become positive or negative after triboelectric charging has nothing to do with the level of conductivity (or ability to discharge) of the material.

The charge created by triboelectric effect depends on various factors such as area of contact, the speed of separation, relative humidity and chemistry of the materials and surface work function. Table II shows the common charge generation situations and the resulting voltage levels generated due to static electricity.