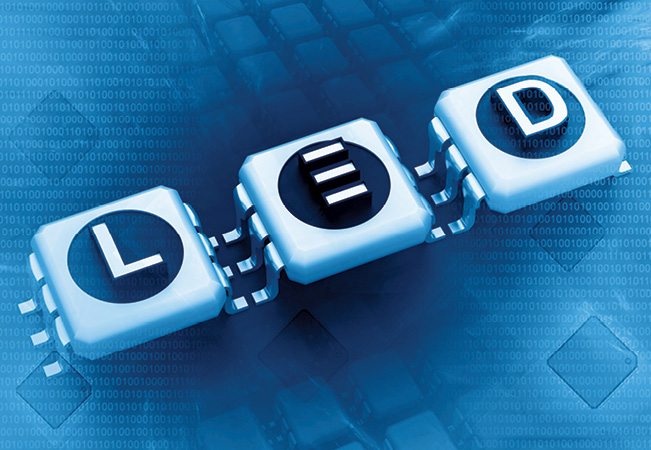 Business has two basic functions, namely, marketing and innovation. A general shift to light emitting diode (LED) lighting across markets is expected to drive the LED industry to the point where marketing will have to focus on innovative features differentiating their LED products from those of their competitors. Merely comparing with traditional lighting and citing lower power consumption might not work out. Let us take a look at what is happening to components for LED lighting apart from lower power consumption.

Better integration on dimmers and drivers
“An LED driver’s performance largely depends on its compatibility with the dimming device. The driver must be designed to understand and interpret signalling by the dimming device in order for dimming to occur. Many dimming technologies used for conventional sources can also work with LEDs. These include 10V analogue, DALI, DMX and others that separate the dimming signal from AC mains voltage,” says T.A. Babu, managing director, Quantum Dots Technology Pvt Ltd.

Babu explains that the most common phase-control device, which is the fan dimmer, is less compatible with dimmable LED dimmers. Consequently, pairing a fan dimmer or a similar triac based one with an LED product can be a hit or a miss. So these kind of triac based solutions can cause a host of problems like pop-on, drop-out, dead travel, ghosting audible noise and flickering. Quantum Dots offers the right dimming solution to ensure end-user visual comfort and satisfaction. Our concept dimming over line (or DOL) is an easy solution and perfectly handles the situation. It does not require separate wiring between an LED driver and a dimmer unit as it is a pluggable device.

Quantum dots has also brought out a new LED driver named SEFA which functions in three modes of operation, namely, BCM,CCM and DCM. Babu explains that there is no complexity in the design part and it does not suffer from high voltage stress in the power switch.

Infineon has also brought out ICL8105 single-stage fly-back controller with an optional burst-mode control scheme that helps extend the dimming range. It is aligned to line frequency to avoid noise, flickering or shimmering.

JSK Innovative Technology Pvt Ltd has just completed their research and development of a phase-cut dimmable driver with a range starting from 15V to 55V, current range of 100mA to 700mA and above 0.95 power factor correction (PFC). 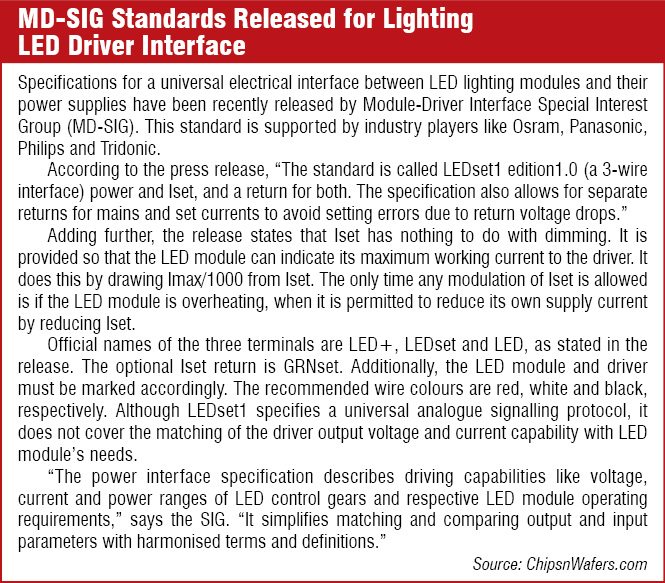 Plessey has announced a range of MaGIC LED die manufactured on GaN-on-Silicon. This process technology will form the base for their applications-specific LEDs.

Circuit protection. “We have seen many automation systems getting damaged due to the reverse current of drivers. So our new range of dimmable drivers have an opto-isolation circuit designed into it that protects the system from reverse current in the dimmable driver,” says Rakesh Shah, managing director, JSK Innovative Technology Pvt Ltd (JSK Urja).

An active PFC greater than 0.95 is claimed to be attainable with the newly-launched RCOB LED drivers for CoB LEDs from RECOM. Active PFC diminishes total harmonics, automatically corrects for AC input voltage and is capable of delivering a full range of input voltage.

LED Engin claims that they have used an improved LZP package design and a low thermal resistance per package footprint of 0.5°C/W to build a 25-die, 80W emitter that can deliver 3800lm from a 6.2mm×6.2mm light emitting area on 12mm×12mm emitter footprint.

Coloured LED chips
City farming or vertical farming uses a cultivation process where crops are grown in small interior areas using LED arrays to provide an optimal light spectrum. This is done by mixing LEDs of various colours for boosting growth throughout the year, irrespective of how the Sun is shining.

The problem of beam halos and mismatched, unmixed colours is claimed to be resolved here by using one focal length for all colours. Cree announced XQ-E high-intensity LEDs that deliver maximum candelas through secondary optics, enabling lighting manufacturers to radically reduce system size and power of high-intensity colour applications.

Adding further, the company release mentions that it is built on Cree’s SC5 technology platform and features a combination of optical symmetry, consistent design across all colours, and a tiny 1.6mm×1.6mm footprint simplifies manufacturing and design while providing excellent colour mixing.

Investing in longevity
Lighting products started off as gas-filled tubes with inverters, which were then followed by compact fluorescent lamps. “Components that go in LED lighting products today dissipate comparatively less heat and do not use any chemical gases,” explains G. Jeganathan, director, GTP Equipments India Pvt Ltd. However, heat still affects the reliability of LEDs by a significant amount.

“The brand of the component is not really connected to quality. Any single component failure will be a cost to the company, and that hurts its image. In our case, we have set up complicated test equipment and systems to make sure every LED that goes through us is tested with different current variations, switching frequencies and environmental conditions,” says Joy Biswas, product manager, Forbix Semicon.

Heat is definitely a problem for these devices. “Bulbs that come with aluminium heat-sinks do a good job of dissipating heat. The more heat these dissipate, the more reliable are the bulbs. This is because excess heat can damage the internals. For example, copper wiring is affected by continuous heat over a period of time, which can end up tearing the transformer if too much heat resides inside the unit,” says Biswas. Now that you know this, consider the fact that quite a few inexpensive LED bulbs come with plastic heat-sink components!

What next
“In the future, lumens per watt will improve at least five to ten times over conventional LEDs, while cost per watt will dramatically come down. Multi Junction Technology (MJT) LEDs are more reliable than conventional LEDs today,” says I. Hari Prasad from OMTRONICS LED Lighting Solutions. Engineers using MJT LEDs will be able to eliminate drivers or converters in their designs. Prasad also explains that MJTs have a longer life and enjoy low-distortion power by having one of the lowest total harmonic distortion along with the highest power factors.