The Arduino family. Arduino family needs no introduction. It is an open source electronics prototyping platform based on flexible, easy-to-use hardware and software. It is intended for anyone interested in creating interactive objects or environments without having much programming experience. Because of the simple IDE and coding environment, Arduino is a common choice for engineers and non-engineers alike. The hardware of the various boards in the family is completely open source and designed around an 8-bit Atmel AVR microcontroller, or a 32-bit Atmel ARM. The boards come pre-burnt with a bootloader that allows you to upload new code without the use of external hardware programmer.

Raspberry Pi. Raspberry Pi has recently gained huge popularity due to its small size, great computing power and low cost. The heart of the board is a Broadcom BCM2835 system-on-a-chip (SoC) that contains a 700MHz ARM 11 chip and a GPU capable of playing movies with BluRay quality. The Raspberry Pi Foundation has allowed overclocking up to 800 MHz. The CPU power is comparable to that of an old Pentium III with at least ten times lower power consumption.

On-board hardware includes a 3.5mm audio jack, an RCA connector for connecting analogue television sets and also a modern HDMI interface for transferring digital audio and video. An RJ45 network connector is also available and a dual USB type ‘A’ connector allows connection for mouse and keyboards. The operating system used is LINUX, with several distributions already optimised to run on Raspberry Pi. The OS boots from the SD card. To interface with external hardware, a complete GPIO connector is provided, which has pins with different functions. The device has seven true GPIO pins, I2C interface, SPI interface, serial TX/RX pins and PWM pins that can be used to control external hardware.

TI’s MSP430 LaunchPad. The MSP430 LaunchPad (Part No. MSP-EXP430G2) is an easy-to-use Flash programmer and debugging tool for Texas Instruments’ MSP430G2xx series microcontrollers. It has lots of debugging and interfacing features on-board for any development across MSP430 microcontroller device. It has on-board emulation for programming and debugging and features a 14-/20-pin DIP socket, on-board buttons and LEDs, and BoosterPack-compatible pinouts that support a wide range of plug-in modules for added functionality such as wireless and displays. 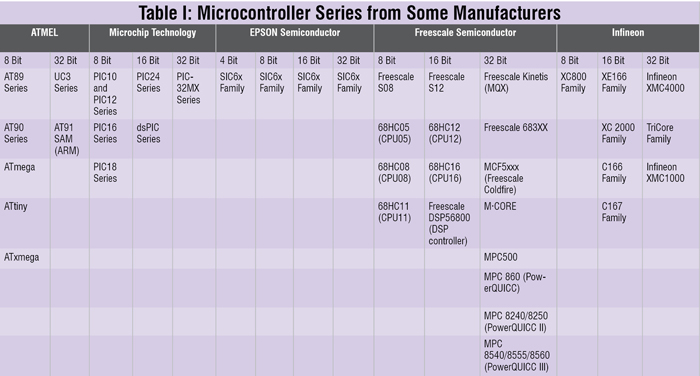 STMicroelectronics’ Discovery. For students and professionals who are looking to start with ARM architecture, this Cortex-M3 based system would be a great choice. STMicroelectronics actually has come up with several different development boards for virtually every type of ARM microcontroller that it offers. The one shown in Fig. 4 has following features:
1. STM32F051R8T6 microcontroller featuring 64kB Flash and 8kB RAM in an LQFP64 package
2. On-board ST-LINK/V2 with selection-mode switch to use the kit as a standalone ST-LINK/V2 (with SWD connector for programming and debugging)
3. Board power supply through USB bus or from an external 5V supply voltage
4. External application power supply: 3V and 5V
5. Four LEDs: LD1 (red) for 3.3V power-on, LD2 (red/green) for USB communication, LD3 (green) for PC9 output, LD4 (blue) for PC8 output
6. Two pushbuttons (user and reset)
7. Extension header for all LQFP64 I/Os for quick connection to prototyping board and easy probing 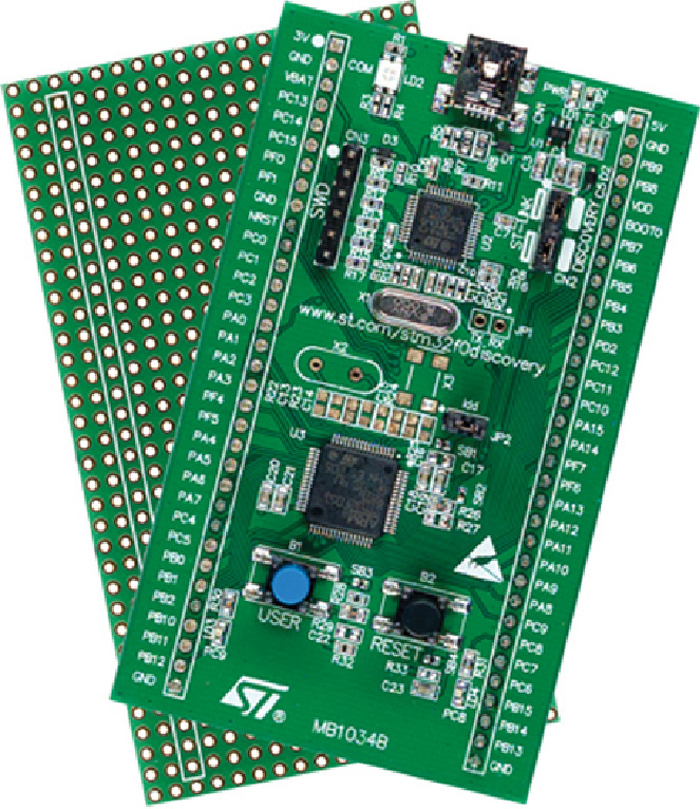 mbed. The mbed platform provides free software libraries, hardware designs and online tools for professional rapid prototyping of products based on ARM microcontrollers. Hardware of the latest mbed microcontroller boards is based around an NXP microcontroller, which has an ARM Cortex M3 core running at 96 MHz, with 512kB Flash, 64kB RAM, as well as several interfaces including Ethernet, USB Device, CAN, SPI, I²C and other I/Os.

PandaBoard. PandaBoard is a low-power, low-cost, single-board computer development platform based on Texas Instruments’ OMAP4430 SoC. PandaBoard ES is a newer version based on OMAP4460 SoC, with its CPU and GPU running at higher clock rates.

PandaBoard ES uses a newer SoC, with a dual-core 1.2GHz CPU and 384MHz GPU. Primary persistent storage is via an SD card slot, which supports SDHC cards up to 32 GB. The board includes wired 10/100 Ethernet as well as wireless Ethernet and Bluetooth connectivity.

The device runs the Linux kernel, with either traditional distributions, Android or Mozilla Firefox OS. Optimised versions of Android and Ubuntu are available from the Linaro Foundation. Linaro has selected PandaBoard as one of the hardware platforms that it supports with monthly build images.