There has been a significantly increased interest in the wireless and radio frequency (RF) modules in research as well as industry, feel industry experts. Alok Jain, co-founder, InkOcean.in, says, “It is primarily being driven by the hottest technology buzz of today—the Internet of Things (IoT). There are claims of many trillion dollars of economic output in the next few years in the realm of IoT devices.”

One of the most important elements that help make devices IoT-enabled is their being wirelessly connected to other devices or the device hub. Jain adds, “Over the past couple of years, many low-power wireless protocols have been jostling for this space. Noteworthy technologies among these are Wi-Fi, Bluetooth Low Energy (BLE), ZigBee and RF.”

Multiple wireless technologies such as Wi-Fi, ZigBee, near field communication (NFC), RF, BLE and IPv6 over low-power wireless personal area networks (6LoWPAN), to name a few, are integrated in modules today. Praveen Ganapathy, director applications-processors, sales and applications, Texas Instruments (TI) India, informs, “At a macro-level, considering all these technologies, today’s modules have low power, high bandwidth, high data throughput, high-level security and certifications. There is a trend towards integration of microcontrollers in modules as well.” 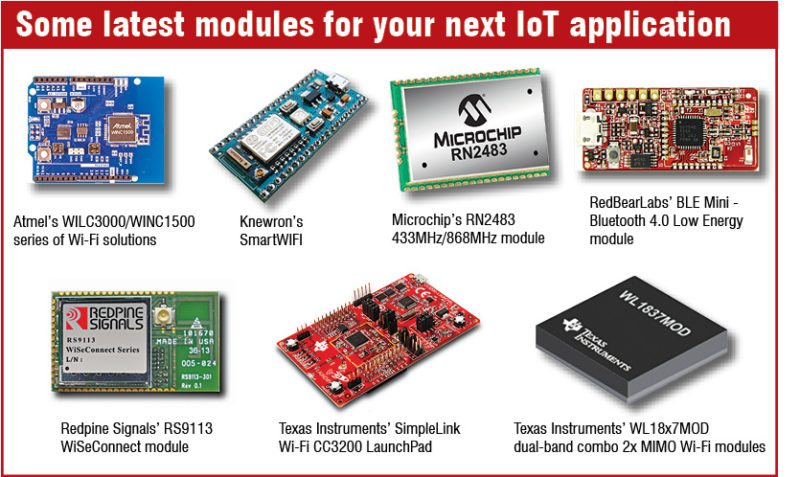 Modules today also have the capability to handle RF in different bands. Ganapathy says, “Nowadays, there is higher transmission in 2.4GHz range, resulting in network congestion. There is a trend towards using sub 1Ghz and 5GHz bands to achieve a higher range.”

IoT-driven modules
IoT is driving the usage of wireless modules in a big way. Higher throughput and better performance are not the major factors looked at when buying a module, it is the high level of integration in these, informs Dhiraj Sogani, general manager and senior vice president, System BU, Redpine Signals Inc. Integration of multiple wireless standards is very critical for the IoT market. He says, “It is difficult to find a single wireless technology that will meet everyone’s requirements. Each has its own niche and application.”

Today’s RF modules for wireless applications include options for dual-band and quad-band and support key air interfaces including 2G, 3G, 4G (LTE), ZigBee, Wi-Fi and WiMax, which are favourable for IoT applications, informs Abhishek Rao, technical marketing manager, element14. He says, “The latest addition features an ultra-small core, which enables a much smaller footprint than the previous generation, delivering significant size reduction and greater platform flexibility across applications and end products.” He adds, “By incorporating the latest modules, IoT applications will have ultra-long ranges with minimal power requirement, boosting the overall system performance.” 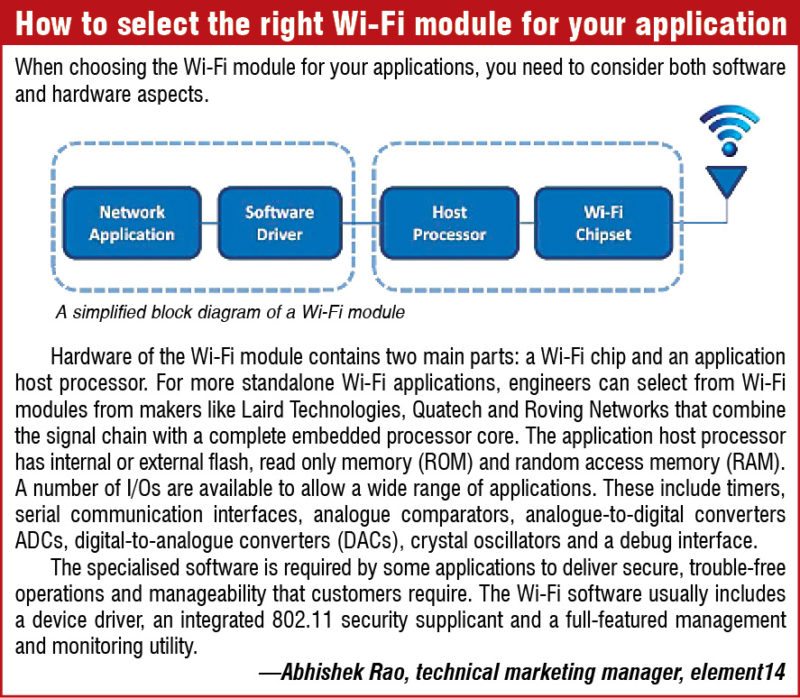 IoT is a horizontal market, and fields like industrial, medical, automotive, wearable or healthcare are some of the verticals where wireless modules are used. Sogani explains, “Modules manufactured today are more horizontal-specific rather than vertical-specific. Of course, there are some modules manufactured specifically for particular verticals but these are more expensive.”

Sogani adds, “There are very high-output power modules that can go up to 25dBm or modules catering to vehicle-to-vehicle communication; such modules are meant for niche applications.” Manufacturers are focusing on creating solutions with a high level of technology and software integration that can be used across multiple verticals.

New features for IoT
Redpine Signals recently announced a Wi-Fi, Bluetooth and ZigBee combination module, which is very unique in the market. Bluetooth includes Bluetooth Classic and BLE. Sogani says, “There is no other vendor who has this combination. With such a module, it is possible to create a system that is a perfect gateway for different wireless standards.”

He adds, “Data can be collected on Bluetooth, ZigBee and Wi-Fi, and transferred to the cloud using Wi-Fi. We are seeing that Wi-Fi is becoming the hub for other wireless technologies to get onto the Internet.” With this unique combination of multiple wireless standards—Wi-Fi, Bluetooth and ZigBee—in one module, area, power and cost get reduced significantly, making it ideal for wearable devices.

With the advent of the IoT, everyone is jumping onto the IoT bandwagon with all they have, feels T. Anand, managing director, Knewron. Atmel launched WILC3000/WINC1500 series of Wi-Fi solutions in module format for developers. He says, “These modules are highly powerful and can be controlled via multiple types of serial interfaces.”

“Additionally, another new silicon vendor, Espressif, has also jumped in with their newly-launched ESP8266 systems on chip (SoC) as well as Wi-Fi modules around it. These modules are extremely cheap as compared to all other Wi-Fi modules in the global market,” Anand adds.