Demonstrate the gate-level digital logic and build-up larger designs with SmartSim. SmartSim is available for Windows and Linux.

Are you working with Raspberry Pi and need to design a larger logic circuit and simulate it too? Do not worry. SmartSim will definitely help you with this.

Why use SmartSim
Starting from its ability to create a hierarchical design to its ease-of-use, everything makes the tool widely acceptable and popular amongst the different categories of users.

Hierarchical design. This special feature allows you to create customised components so that these can be included in the library for further use in any of the circuits later. This allows you to easily create large and complex circuits. This also gives you the ability to easily include the large circuits in other circuits as sub-components.

The interactive simulation represents the wires in the circuits with some special colour codes, making it easy for users to understand if the circuit is working correctly.

Work presentation. SmartSim allows you to export both the circuit designs and timing diagrams to different formats like portable document format (PDF), portable network graphics (PNG) and scalable vector graphics (SVG) so that these can be used in another system for further review and report. You can also give Print command from within the tool to get the circuit layout on paper. 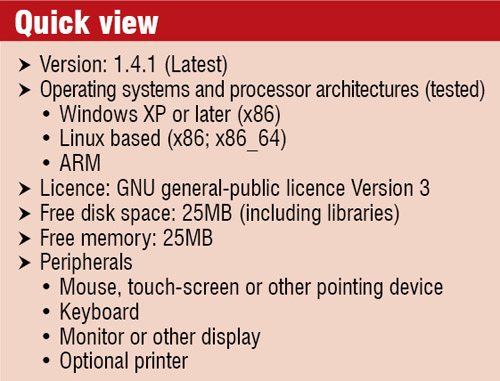 Competitors at hand
Ashley Newson, the creator of SmartSim says, “SmartSim is not a fully-fledged printed circuit board (PCB) or other hardware design tool like KiCad, quite universal circuit simulator (Qucs) or SPICE, and so cannot be compared to them.” As per Newson, the only software we can compare SmartSim to is Logisim.

Logisim is another educational tool for designing and simulating digital logic circuits. It is again an open source software, with colour-coded wiring that aids during simulation. It runs on all devices that support Java version 5 or later, and has a special version released for MacOS X and Windows OS.

Although it shares a high resemblance with SmartSim, Logisim cannot accommodate any analogue components, and any further development to it has also been suspended indefinitely.

Another difference is SmartSim’s compatibility with Rapsberry Pi, which has not yet been proved in case of Logisim.

We are all humans and, despite being aware of the features and advantages of this software, we want to know the experiences of other users too.

As per user reviews on SmartSim blog created by Raspberry Pi, one of the reviewer uses it on three different platforms and was highly impressed by its multi-platform capability. As per him, SmartSim looks and feels identical on all three of them and creates circuit files that can be transferred between different versions seamlessly.

Another user, too, accepted that the software is pretty good. He further added that, SmartSim is slick, easy-to-use, looks great and seems to do exactly what it says on the package. He said that, he was surprised by the performance of SmartSim on the fairly-large circuit he connected.

Although this tool has had almost all positive feedback, one customer was disappointed because he could not install it on his old Fedora system. Newson agreed that there was a small bug in the .make file of the software that he removed and then the installation went perfectly.

The author is a technical journalist at EFY