If you are looking for an open source electronic design automation (EDA) software, Electric is one of the highly efficient options. This very-large-scale-integration (VLSI) tool lets you draw schematics and create integrated circuit (IC) layouts digitally. Electric 9.07 is also compatible with hardware description languages like VHDL and Verilog.

The default library of Electric software consists of most of the components necessary for IC design, supporting different technologies and multiple file formats. The different categories of circuits that Electric can design include a complementary metal-oxide-semiconductor (CMOS), n-channel MOSFETs, bipolar technologies based on integrated injector logics, newer layout technologies like thin-film, carbon nanotube and photonics, abstract circuits like digital filters, temporal logics and so on. Each design technology comes out on the interface as a collection of components connected with wires.

A major advantage of the software is that the technology describes the technical parameters of the components and wires, like design rules, simulation aspects and graphical descriptions to name a few. Users can also add modules to custom-design the environment with the help of a technology editor. 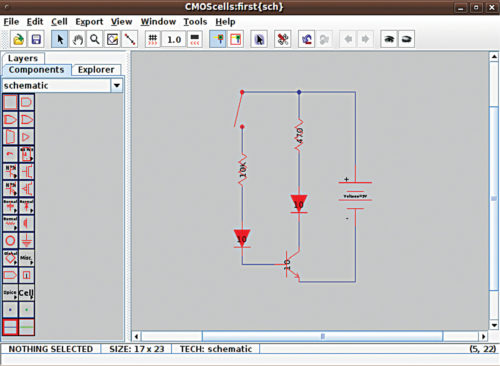 Electric has a strong inventory of analysis and synthesis tools that create the simulation by storing the connectivity and geometry. These include:

This tool checks and validates the layout’s design rules compliance and displays spacing errors, notch errors, minimum size errors and other violations. Interfaces like Caliber and Assura can be used to check design rules of external circuits.

The electric rule checker has two functionalities: ensure proper electrical contact and spacing throughout the circuit, and check for antenna rule violations.

1. PLA generator, which functions from a library of PLA elements, facilitating customised arrays

2. ROM generator, which builds a ROM layout from a personality table

3. Pad frame generator, which places pad cells around a chip core and wires them together

Electric comes with a number of routing modules. The maze router helps in connecting single wires between points, while the sea-of-gates router uses multi-threading to run wires faster. There are two other routers that ensure wires are properly placed. Other than that, the auto-router creates exclusive connections in overlapping regions. The mimic router adds extra wires in situations similar to those when the user runs by hand. The river router connects parallel wires in a channel between cells.

The VHSIC Hardware Description Language (VHDL) system uses a layout to generate VHDL and compiles the program to netlists of various formats. Then, with the help of built-in simulators, these netlists can be simulated and converted into a layout with the silicon compiler or saved to memory.

The netlist created from VHDL is fed to the silicon compiler for placing and routing standard cells.

The compactor tool ensures minimal spacing, or compaction, of the circuit by adjusting the geometry along X and Y axes.

Electric is an open-source GNU project undertaking. Coded in JAVA, this software can run on the majority of platforms. Electric is a simple and compact EDA tool with a large repertoire of facilities that can be put to best use.