Simulation of Communication Systems using IT++

In this article, we would like to introduce you to a versatile C++ library called IT++. The library is composed of a handful of useful classes and functions in mathematics, communications and signal processing. Academicians and industrialists around the world, working on communications, make extensive use of this library. The generic vector and matrix classes contained in the kernel resembles the approach used in MATLAB/Octave.

Modulators. An analogue modulator transfers an analogue-baseband signal over an analogue-bandpass channel. Various analogue-modulation schemes like quadrature amplitude modulation (QAM) can be implemented using IT++.

The digital modulator transfers a digital bit stream over an analogue-bandpass channel. Binary phase shift keying (BPSK) and other digital modulation schemes are included in the software.

The pulse modulator transfers a narrowband-analogue signal over a wideband-baseband channel. Schemes like pulse amplitude modulation (PAM) are provided in the library.

Pulse shaping filters. In order to adapt the transmitted waveform more to its original purpose or to make it suitable for the characteristics of the transmitting channel, waveform of the transmitting pulses needs to be altered. Raised cosine (RC) filter, a widely-used pulse-shaping filter with an inherent ability of minimising inter-symbol interference (ISI), could be implemented using IT++. Root raised cosine (RRC) filter is yet another pulse-shaping technique widely used in mobile communication.

When we consider AWGN channel, data received at each time equals data sent plus Gaussian noise with mean zero and some standard deviation.

Both these channels can be modelled using IT++

Multi-path fading. When a signal is transmitted through a wireless medium, it propagates through multiple paths before reaching the antenna. Fading occurring in this path could either be frequency-selective or frequency-flat. If the channel’s coherence bandwidth is greater than the signal’s bandwidth, it is frequency-selective. On the other hand, if the bandwidth of the signal is greater, then it is flat-fading. Both can be simulated using the tool.

Pathloss models. When a signal is transmitted, attenuation on the signal increases as it propagates through space. Attenuation thus produced, termed as pathloss, is a major component in the design of the link budget in a communication system. 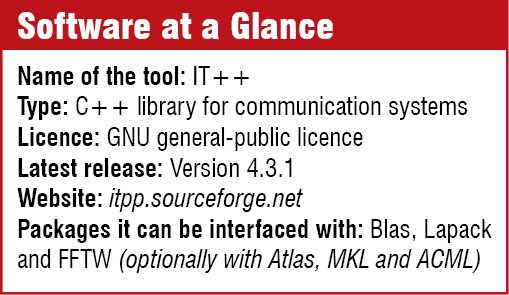 Using the software, the designer can make use of various pathloss models like COST 207, COST 257 and ITU model for coverage prediction.

Complementary functionalities
Ranging from mathematical functionalities like random number generation to features including fast independent component analysis (ICA) in signal processing and OFDM in communications, the library includes a lot of functionalities in order to complement the communication system design. Let us take a quick glance at some of these.

Math functions. The library consists of modules for handling basic mathematical functions such as hyperbolic, logarithmic and exponential function. IT++ also supports numerical integration and trigonometric functions. Various matrix operations such as finding the determinant, determining the inverse of a matrix or matrix decomposition can be done using the library. The module can also be used for solving linear equation systems.

The library can also be used for windowing and filtering operations, both in time as well as frequency domain. It can be used for evaluation of the roots of polynomials as well as for fast ICA.