Telecom is one of the fastest growing fields in today’s recessionary environment. The Indian telecom sector will provide employment to around ten million people by 2012, according to a recent study. So get ready to become a part of this thrilling wave sweeping the country! -- MONIKA BHATI

If there is one sector in India that is showing tremendous growth as well as potential, it’s definitely telecom. Being recognised as one of the most lucrative markets globally, the Indian telecom sector has not only shown signs of profitability but also contributed significantly to the nation’s economy. With over 892 million telecom subscribers, India is the fast-est growing and the second-largest telecom market in the world. The future looks tremendously bright for this sector.

According to Prof. Sanjay Sharma, associate professor, electronics and communication, Shobhit University, “The opportunities in the Indian communications sector have grown phenomenally over the last three years as has been surveyed by the ministry of communications and information technology in New Delhi recently. Telecom sector is one of the leading contributors to India’s flourishing economy. The telecom services in India have been recognised as a world-class tool for the socio-economic development of India.”

Tele-density has grown by leaps and bounds from 2.3 per cent in 1999 to 4.8 per cent in 2002. But still, the world average is 7.5 times the Indian average, while the Asian average is 4.5 times. Currently, the telecom market in India is estimated at $8 billion, and this is expected to undergo an accretion by the end of 2012.

Sharma adds, “The growth wit-nessed by the telecom market in India has increased the number of opportunities for the industry. This has been fuelled by the growing mobile sector, which attained the consumer level of 10 million by the end of December 2002 (almost a 100 per cent growth in the year). This outstanding growth in the mobile sector explains the advent of digital cellular technology and reduced tariffs as a consequence of competitive pressures. The growth in the number of cellular subscribers has surpassed the benchmark of subscriber base. The telecom market has increased dramati-cally with the advent of wireless-in-local-loop technology.

”Around 300 million population of highly consumable middle-class is advantageous for the sector. “Some of the Indian households that have land-line telephones can replace these with mobile phones, which is very unlikely to happen in the developed countries. Therefore it adds up to the growth in the mobile sector in the Indian telecom industry,” says Sharma.

The opportunities in the Indian telecom sector are increasing at a fast pace with the introduction of Internet telephony services and a number of international long-distance services. 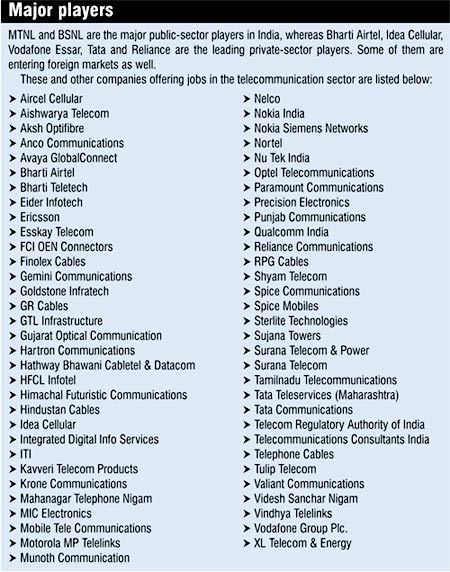 become a part of this booming sector. According to a recent study by Price water house Coopers (PwC), the telecom sector in India will provide employment to around ten million people by 2012. The sector will provide about 2,800,000 direct jobs and around 7,000,000 indirect jobs by next year, the study reveals. Titled In-dian Mobile Services Sector: Struggling to Maintain Sustainable Growth, the study was commissioned by the Cellular Operators Association of India.

Vinay Grover, founder and CEO, Symbiosis Management Consultants, shares, “Most of the world’s renowned companies have already entered India through joint ventures. With the launch of 3G, WiMAX and the planning being done for 4G, there is a huge demand for qualified and skilled professionals with knowledge and technical know-how in these fields. Also, with the upcoming projects, the telecom industry is making room for more than 5000 trained and experienced radio frequency engineers.

”The telecom revolution in India has been quite exceptional with so many new players entering the market and existent players expanding operations. While the sector has been one of the largest employers in the last decade, it would still need around 275,000 people by 2015. The challenge here would be to get the right talent,” Grover adds.

Johar continues, “Majority of the job opportunities are in the area of solutioning, product management, projects’ roll-out and management, customer support, manufacturing and managed services, and remote infra-structure management.”

“There is likely to be a persistent demand for engineers in the industry, given the untapped potential still wait-ing to be explored and the entry of several new players in the fray. The de-mand will be mainly driven by vendor companies like Nokia Siemens, Erics-son, GTL, Alcatel Lucent and Huawei, among others,” says Tarun Sapra, RF SME performance, Alcatel Lucent.