Yoda module (YM1) acts as a Zigbee coordinator RF module. For connecting the module to Arduino, you would require an adaptor. The Yoda module mounted on its adaptor is shown in Fig. 3.

Before using the transmitter circuit, you need to program the Arduino Nano with Arduino code (remote_tx.ino) and the Yoda module to be configured as explained later.

The use of Yoda module and adaptor is explained in their manual. Software configurations are explained in Yoda Command Set document. Both these can be found at https://drive.google.com/open?id=1fa8ruNQt7Y2IKUxUFJQBsLBjvWKn6zh5

The receiver is built around Arduino Nano (Board2), Yoda module (YM2), Yoda adaptor(YA2), 2-channel relay module(RM1), and 5V DC power adaptor. Here, the Yoda module acts as an end-node module. The receiver circuit (shown in Fig. 5) wired on a breadboard is shown in Fig. 6.

Connect one end of the micro USB cable to Arduino Nano board (Board2) and the other to PC/desktop to power on the receiver circuit and upload the Arduino code (relay_rx.ino). You can also connect a 5V, 1.5A DC power adaptor to drive the relay and the Arduino (Board2).

To connect a Yoda adaptor to your PC, first you need to install MCP2221 USB driver (USB 2.0 to UART protocol converter) in your PC. The latest driver for MCP2200/MCP2221 can be downloaded from https://www.microchip.com/wwwproducts/en/MCP2221. Click on Documents option to get the exact driver.

Both YM1 and YM2 need to be configured properly in Docklight to start communication between the two modules. Each Yoda module (YM1 and YM2) should be configured with common channel and PAN ID values to interact/communicate between the two or more Yoda modules. The Yoda Command Set document describes Yoda module software configurations and the packet structure for sending data from one Yoda module to another.
You can test the two circuits with a computer by connecting YA1 to a USB port and YA2 to another USB port of the same laptop/PC. 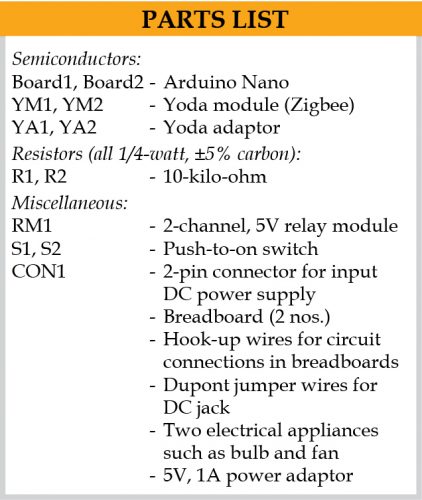 Follow the steps below to configure a Yoda module:

In this project, two Arduino Nano boards have been interfaced with Yoda modules for controlling two electrical appliances. Two switches (S1 and S2) are connected to digital pins D3 and D4 of Arduino Board1 in the transmitter to control two electrical loads in the receiver.

Software for Arduino Nano is written in Arduino programming language, which provides serial communication via UART, SPI, and I2C. Arduino IDE is used for compiling and uploading the files to Arduino boards (Board1 and Board2).

To upload transmitter code in Arduino Nano (Board1):

To upload receiver code in Arduino Nano (Board2) follow the steps below:

Power on the transmitter circuit first because Yoda coordinator (YM1) is responsible for starting the Zigbee communication network. Power on the receiver circuit next and wait for five seconds as defined in receiver code. Press pushbutton (S1 or S2) in transmitter circuit to control the corresponding relay in receiver circuit. Digital pins D3 and D4 of Arduino Board2 are interfaced to relay module (RM1) to switch the appliances on/off.

The wireless range between the transmitter and the receiver depends on the Yoda modules used, which was found to be about 600 metres line-of-sight in this case.

Piyush Gupta is working as a senior software engineer at Si2 Microsystems. He did his M.Tech in Embedded Systems from Amity University, Lucknow and has keen interest in the areas of embedded signal processing and process control systems

Krishna Murthy T. is working as a manager at Si2 Microsystems. He did his M.Tech in Space Technology & Applications from S.V. University, Tirupati (A.P.) and has keen interest in the areas of IoT, wireless technologies, and embedded systems