This LED desk lamp can be switched on or off from a distance using Bluetooth. You can even regulate the lamp’s brightness through a slider on the screen of your Android smartphone.

The key hardware required for this little project is an Arduino Uno microcontroller board that enables you to control the lamp. Wiring diagram for the same is shown in Fig. 1.

Regulated 5V DC from the Arduino Uno’s onboard linear voltage regulator powers the HC-05 compatible Bluetooth module. The module communicates with the Arduino through its Tx and Rx lines that are connected to pins 2 and 3 of the Arduino board, respectively.

Pin 9 of the Arduino drives the white LED light source LED1 through the S8050 high-current transistor T1. The 1-kilo-ohm resistor R1 is the base resistor of driver transistor T1.

When the Arduino board is powered through its DC input jack (see Fig. 2), the DC voltage appears at its Vin pin through M7 (1N4007) silicon diode that is connected in series with the positive rail. This voltage is used to power the white LED light source. There is an inherent voltage drop of around 700mV, though.

RemoteXY Android app can be downloaded from this link.

Follow the steps below for proper operation of the lamp:

Fig. 4 shows the screenshot taken by the author during testing of the prototype with an Android smartphone (Nokia 5.3/Android 10).

If there is a connection problem, you might get error message: “The connection is established, but the device does not respond: Time out error: no response!” If you receive this message, recheck your Arduino setup (hardware and software) and/or the smartphone’s Bluetooth connectivity.

The author built his quick prototype using an Arduino prototype shield (for his convenience). The white LED module is in fact a pair of 12V DC cool daylight-white LED plates (x3 lamps per plate) wired in parallel. Its total current consumption, as observed by the author, is 200mA at 12V DC. 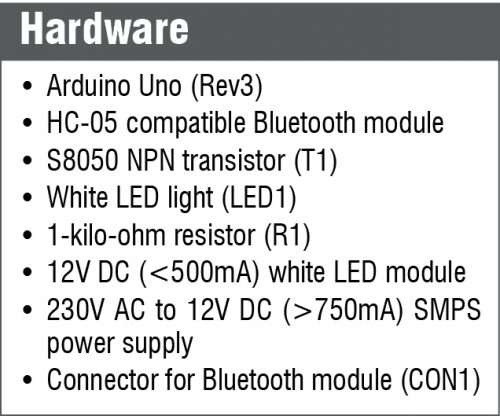 To obtain HC-05 compatible Bluetooth module you may check this link.

For the 12V white LED module check this link.

The author’s project works quite well but has not passed the prototype stage yet. Any additional ideas will be appreciated!