by Rajnandini Tiwari and Yatri Patel under the guidance of Prof. Geetali Saha, EC Department, GCET.

Mobile robots have the capability to move around in their environment and are not fixed to one physical location. Mobile robots can be “autonomous” which means they are capable of navigating an uncontrolled environment without the need for physical or electro-mechanical guidance devices. Alternatively, mobile robots can rely on guidance devices that allow them to travel a pre-defined navigation route in relatively controlled space. In contrast, industrial robots are usually more-or-less stationary, consisting of a jointed arm and gripper assembly, attached to a fixed surface.

Controlling a robot wirelessly is possible with several methods such as Remote, Bluetooth, Wi-Fi, etc. But, the controls of these communication methods are limited to certain areas, and complicated to design as well. To overcome these difficulties, we have come up with a Mobile Controlled Robot.

A Mobile Controlled Robot is a mobile device, which provides wide-range of wireless control ability to your robot unless your cell phone gets out of signal.

The CM8870/70C decoder uses digital counting techniques for the detection and decoding of all 16 DTMF tone pairs into a 4-bit code. This DTMF receiver minimizes external component count by providing an on-chip di_erential input amplifier,clock generator, and a latched three-state interface bus. The on-chip clock generator requires only a low cost TV crystal or ceramic resonator as an external component.

CM8870 can also be termed as DTMF receiver and it is integrated with both band split filter and decoder function into a single IC 18-pin. The power consumption of the IC is 35mW maximum.

DECODING: In CM8870, digital counting techniques are used to decode all 16 DTMF tone pairs into a 4-bit code. 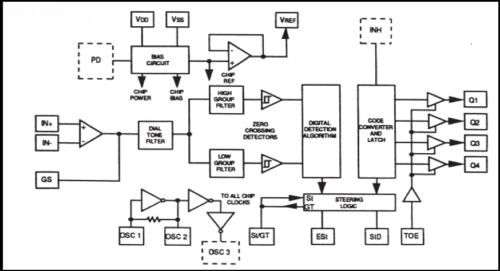 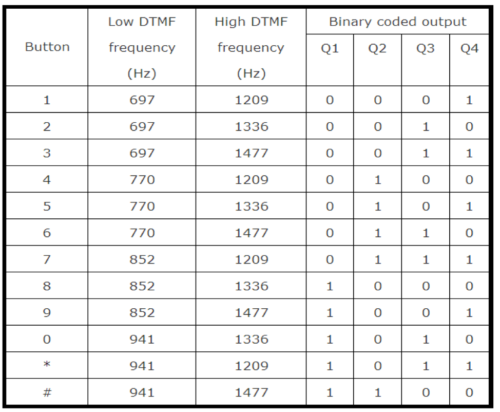 For example: If you press a key 3, the corresponding low and high frequency is 697Hz and 1477Hz (refer the DTMF frequency table) these two frequencies superimposed to produce a single tone and this tone code is sent through the microphone and the signal is received by a DTMF receiver (CM8870), then the superimposed frequencies are separated by bandpass filter, then decoded using digital counting techniques and the digital output is 1100 (Q1, Q2, Q3, Q4) pin (11, 12, 13, 14). So it is very simple to interface.

L293D is a dual H-bridge motor driver integrated circuit (IC). Motor drivers act as current amplifiers since they take a low-current control signal and provide a higher-current signal. This higher current signal is used to drive the motors. L293D contains two inbuilt H-bridge driver circuits. In its common mode of operation, two DC motors can be driven simultaneously, both in forward and reverse direction.

The motor operation of two motors can be controlled by input logic at pin 2,pin 7 and pin 10, pin 15. Input logic 00 or 11 will stop the corresponding motor. Logic 01 and 10 will rotate it in clockwise and anticlockwise directions, respectively.

Enable pins 1 and 9 (corresponding to the two motors) must be high for motors to start operating. When an enable input is high, the associated driver gets enabled. As a result, the outputs become active and work in phase with their inputs. Similarly, when the enable input is low, that driver is disabled, and their outputs are off and in the high-impedance state. 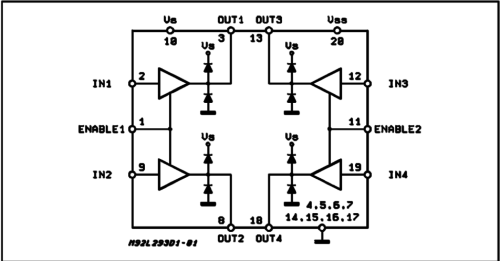 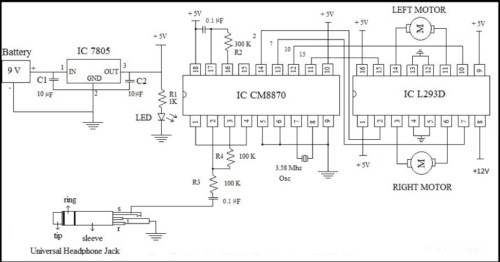 Working of the Model

The Model works as follows:

The tone from DTMF encoder is given to the DTMF decoder IC. The decoder IC internally consists of an operational amplifier whose output is given to pre-filters to separate low and high frequencies. Then it is passed to the code detector circuit and it decodes the incoming tone into 4bits of binary data. This data at the output is directly given to the driver IC to drive the two motors. These motors rotate according to the decoded output.

If the button pressed from mobile is `1′, it gives a decoded output of `0001′. Thus motor connected to the first two pins will get 0 volts and the second motor will have 5 volts to one pin and 0 volts to another pin. Thus the second motor starts rotating and first motor is o_. So, robot moves in one direction either to left or right. If the robot is to rotate forward or backwards then the binary value should be either `0101′ or `1010′.These values indicate that two motors rotate in the same direction i.e. either forward or backwards. The following table gives the low frequency, high frequency and binary output value of each button pressed in the keypad. 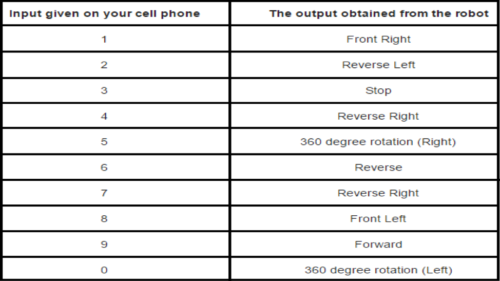 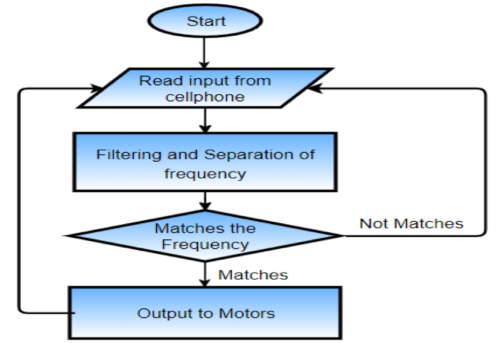 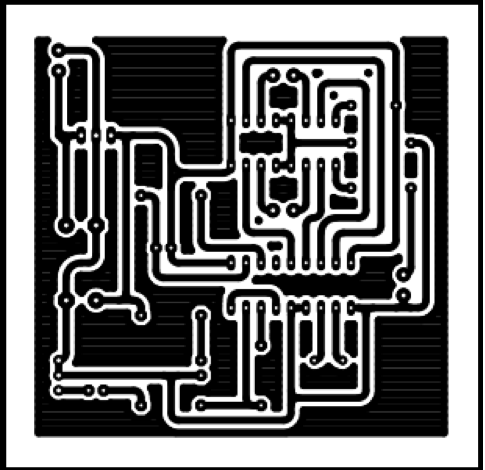 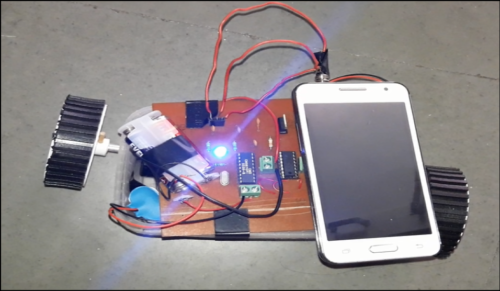 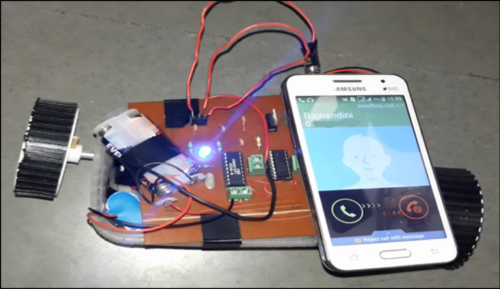 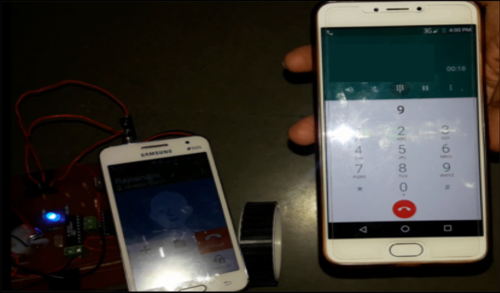 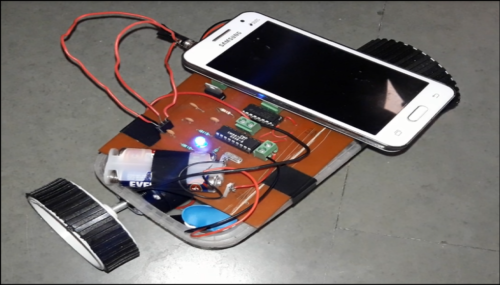 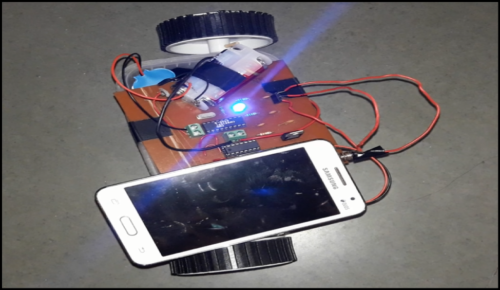 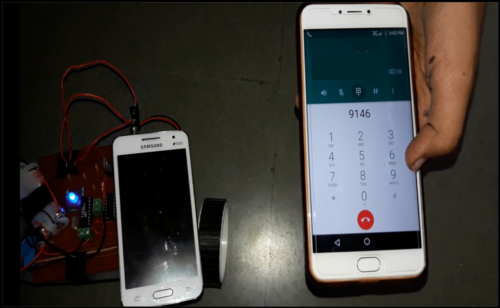 Difference between the Old Project and this Project