Hand sanitisation is important to stop spreading Covid-19 and other transmissible diseases. Even touching the container spout is unhygienic, so it is better to deploy an auto-dispenser to sanitise your hands without touching anything except the sanitising liquid. It can be useful especially for industrial units, workplaces, hospitals, and shopping centres, etc.

But most conventional contactless sanitisers use an LDR and infrared (IR) sensors, which frequently malfunction due to the ambient sunlight and high ambient, etc. So here is an auto-dispenser that uses ultrasonic sensing instead to dispense the sanitiser.

The dispenser uses ultrasonic sensor HC-SR04 to detect hands when these are put beneath the container. It dispenses the required amount of sanitiser automatically for specific time and then gets ready for the next action within half a second. The author’s prototype of the contactless hand sanitiser dispensing system is shown in Fig. 1.

Ultrasonic sensor. Ultrasonic sensors are widely used to detect obstacles in robotic systems. They provide excellent non-contact range detection between 2cm and 400cm with an accuracy of 3mm.

The ultrasonic sensor used is shown in Fig. 3. Since it operates on 5 volts, it can be used directly with an Arduino or any other 5V logic microcontroller. Its technical specifications are listed in Table 1. 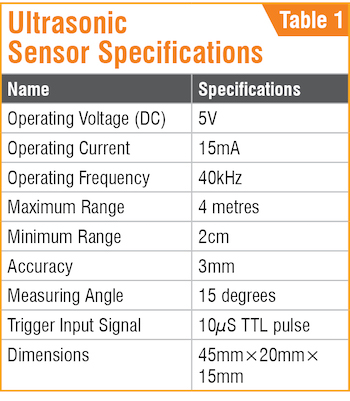 HC-SR04 ultrasonic sensor has an inbuilt ultrasonic transmitter and receiver. When pulse is provided to its Trig pin for 10µs or more, the ultrasonic transmitter sends sonic burst of eight pulses at 40kHz frequency. These pulses travel through the air and after colliding with the object get reflected back. The receiver gets the reflected signal. Meanwhile the Echo pin goes high to start forming the beginning of the echo-back signal. The time for which the Echo pin remains high (width of the Echo pulse) gives the time taken for generated ultrasonic sound to travel to the object and return. Using this time and the speed of sound in air, the distance of the object can be found using the simple relationship:

The speed of sound in air at room temperature is 340 metres per second, or 0.034 centimetres per microsecond. So, assuming time taken to return is 300µs,

This is the total distance covered by the pulse during its forward and return movement. The actual distance is half of it. So,

Here, the ultrasonic sensor is used to detect hands that may be only 10cm from the sensor. So, variable resistor VR1 is connected at analogue pin A0 of Arduino to set the desired range of distance.

When hands are detected, signal from the sensor is sent to Arduino Nano. The Arduino’s nano microcontroller is the main controller, which is programmed to access data from the ultrasonic sensor. The microcontroller performs some logical operations and sends signal to control relay RL1.

The normally-open (NO) relay contact is open and the normally-closed (NC) contact is closed when the relay is not energised. The relay module (dotted lines box in Fig. 2) comprises an optocoupler, switching transistor, capacitor, and resistor connected to status LED, freewheeling diode, and inductive coil.

The optocoupler’s true function is to provide proper isolation between the DC power of relay and the input signal. It has an internal LED across its pins 1 and 2, which is used to trigger base of the transistor to produce the same signal across output terminals 4 and 5 of 4N25. In this way, we get the same output signal but isolated from the input.

There is an SMD type status LED on the relay module. Each relay has its own status LED, which turns on whenever the respective relay is energised through the input pin.

This pump is connected between NO and NC contacts of the relay. When the sensor detects hands, it gives a signal to the Arduino, which provides 5V signal to the relay driver circuit through digital pin D8 of Arduino. So, the relay is energised and pump switches on for ten seconds (as programmed) to discharge liquid from the hand sanitiser. After that the relay de-energises and the pump switches off. Potentiometer VR2 can be used to change the duration of pump remaining on.

Arduino IDE 1.8.15 is used to write, compile, and upload the source code to Arduino board. The program code Dispenser.ino is written in Arduino programming language. The flowchart of the program is shown in Fig. 5.

Arduino Nano has pre-burned bootloader to upload the code to Arduino, so external hardware programmer is not required. A mini-A to mini-B USB cable is needed instead of a standard USB cable.

Compile the code and upload program to the Arduino Nano. Make sure you have chosen appropriate board and COM port from Tools menu for communication between Arduino and PC/laptop.

Enclose the circuit in a suitable box as shown in Fig. 8. Properly mount the ultrasonic sensor at the bottom of the enclosure with the sensor facing downward. Adjust the time and range using respective potentiometers and put your hands below the sensor within the 10cm range. The sanitiser should flow out of the nozzle for ten seconds, after which the pump would switch off, until the sensor detects the next set of hands.

Dhruvi Koshiya is working as a trainee engineer at Advance Circuit Developer Center (ACDC). She has keen interest in embedded systems and IoT in the world of robotics and automation.