This smart bin can help maintain clean and hygienic environment as garbage can be thrown into it without touching it. The bin has a motor attached to its lid and uses an HC-SR04 sensor to detect hands approaching it. The bin could be useful in crowded places like malls, offices, schools, colleges, and hospitals.

Most Indian cities, towns, and villages are not well equipped for garbage collection. Even when the dust-bins start overflowing, no one clears them. This smart bin could be a good solution in such situations as it will send an alert when the bin becomes full.

The bin device has the following features:

When the ultrasonic sensor registers hand movement in front of the bin, it generates a signal at its Echo and Trigger pins. This signal is received and processed by the controller (Arduino) and sent to its digital output pins. The signal goes to servo motor MG90S to rotate the bin’s lid attached to it by required degrees. The degree of rotation, decided by size of the dust bin’s lid, needs to be set through trial and error. 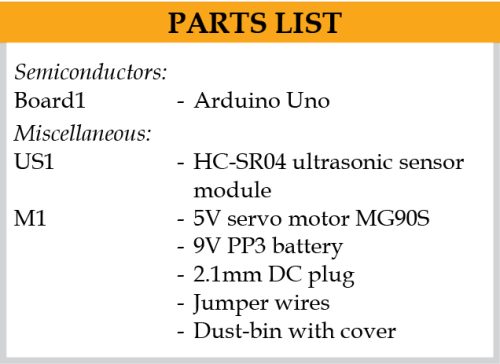 The project can be extended by using load cell and GPS sensor. A load cell can sense the weight of the bin. When the bin gets full and its weight exceeds certain limit, it will send alert signal to the nearest municipality and concerned garbage collector through the GPS. The exact location of the dust-bin can be tracked through the GPS latitude and longitude coordinates on Google Maps.

The circuit uses the software program loaded into the internal memory of Arduino Uno. The program dustbin_EFY.ino is simple and easy to understand. Comments are given at the end of each command line. The code starts by defining the pin numbers of ultrasonic sensor. The Trigger pin (input) and Echo pin (output) of the sensor are defined in the code.

The circuit can be assembled on a general-purpose PCB. Before connecting the sensor and servo to Arduino, upload source code dustbin_EFY.ino to Arduino via Arduino IDE. To power up Arduino Uno board, a 9V PP3 battery with a 2.1mm DC plug can be used.

House the circuit in a suitable box and fix appropriately in the dust-bin. The installation in author’s prototype during testing is shown in Fig. 3 and Fig. 4.