By Aniket Subham and Shibendu Mahata

In this project, an Android application is developed to control light animations using six different LED chasing patterns. Additionally, blinking speed of LEDs is also controlled from the smartphone using fast, moderate and slow buttons on the app. The authors’ prototype is shown in Fig. 1.

The circuit diagram of the project is shown in Fig. 2. Components used in this project are mentioned below.

The MCU can operate at a clock frequency of 16MHz. In this project, Arduino receives the command from Android app (in the smartphone) through Bluetooth module, and correspondingly blinks the LEDs (at their specified speed) connected to nine digital pins (5 through 13) of Arduino. Super LEDs can be used to eliminate current-limiting resistors (R1 through R9) in series with them. 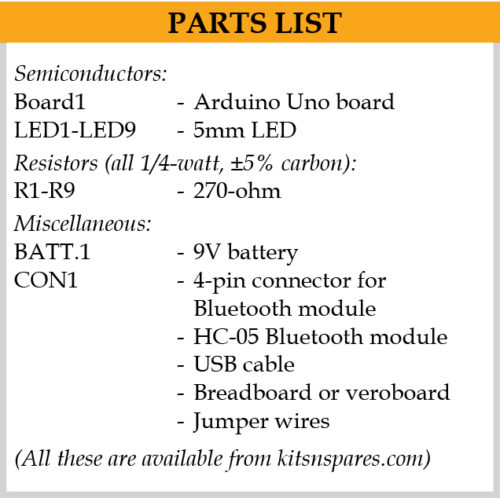 Android smartphone. The controlling app is based on Android, and has been designed using MIT App Inventor, which is an intuitive, visual programming environment that allows the user to build fully-functional apps for smartphones and tablet PCs. The project has been tested on Redmi 3S smartphone.

For execution of the project, connect Arduino Uno board to the laptop/PC using a USB cable.

Serial.println() function helps control the LEDs from Tx pin of Bluetooth to Arduino. Now, make connections as per the circuit diagram (Fig. 2).

Download and install LED.apk on the smartphone. After successful installation, turn on Bluetooth of the smartphone and connect it with HC-05 module; default password for HC-05 is 1234 or 0000.

You can control the glowing patterns of LEDs in three modes, namely, fast, moderate and slow. Android app can now control the LEDs with six different patterns when you tap on the corresponding button.

Some important development stages of app development, that is, screenshots of Designer and Blocks section as designed using MIT App Inventor are shown in Figs 3 and 4, respectively.

LED.apk is generated from MIT App Inventor after completion of above stages.