Fayaz Hassan is a manager at Visakhapatnam Steel Plant, Andhra Pradesh. His interests include MCU projects, mechatronics and robotics

The timer can be easily set with four switches (S3 through S6) to select minutes/seconds, hundredths, tenths and units. Two more switches are used to start (S2) and stop (S1) the timer. 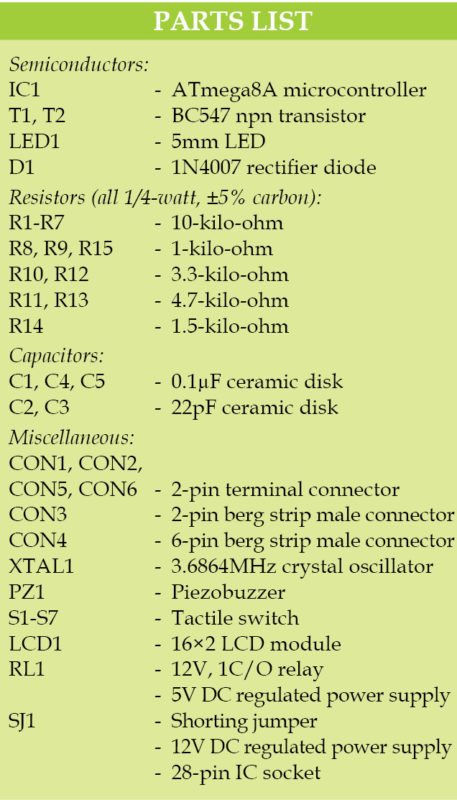 Circuit diagram of the countdown timer is shown in Fig. 1. ATmega8A (IC1) from Atmel is at the heart of the circuit. Associated components include a 16×2 liquid crystal display (LCD1), two BC547 transistors (T1 and T2), a piezobuzzer (PZ1), a 12V single-changeover (1C/O) relay and a few other components.

The software is written in ‘C’ language and compiled using an AVR Studio 4 software. You can use any suitable software to burn the hex code into the microcontroller through ISP port. At EFY Lab, we used ProgISP programmer for the purpose.

Before programming, set fuse bits for the 3.6864MHz crystal option as shown in Fig. 2.

An actual-size, PCB layout for the countdown timer is shown in Fig. 3 and its components layout in Fig. 4. After assembling the circuit, enclose it in a suitable box.

Insert the programmed MCU in the IC socket on the PCB. Connect an electrical load (say, 100W bulb) across CON6, and 230V AC mains across CON5.

Now, power on the circuit by connecting a 5V DC supply at CON2. LED1 will glow and the buzzer will sound for about one second, followed by display of ‘countdown timer’ message on LCD. The system is now ready to use, waiting for the user input.