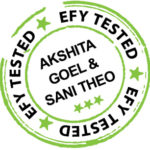 This project presents a user-friendly way of controlling four electrical equipment using an LCD-based interactive menu. Usually, each equipment is controlled by a pushbutton switch. In this design, instead of four pushbuttons, only two pushbuttons are used to control the operations of four electrical equipment. Pushbuttons provide a hardware interrupt to Arduino, which executes the corresponding interrupt sub-routine to implement the control algorithm. The authors’ prototype is shown in Fig. 1.

The circuit diagram of the electrical equipment control system using Arduino is shown in Fig. 2. Hardware includes Arduino Uno board, 16×2 LCD, four-channel relay board, two pushbutton switches and a few other components.

In this project, two momentary pushbuttons (S1 and S2), namely, Next and Set, are provided so that you can select which load to control. Load number and status of each load are also displayed on the LCD menu. On pressing Next, you can choose between various loads to control. On pressing Set, you can turn on or off a particular load.

Major components used in this project are described below.

Arduino Uno is an AVR ATmega328P microcontroller (MCU)-based development board with six analogue input pins and 14 digital I/O pins. The MCU has 32kB ISP flash, 2kB RAM and 1kB EEPROM. It can operate at a clock frequency of 16MHz. 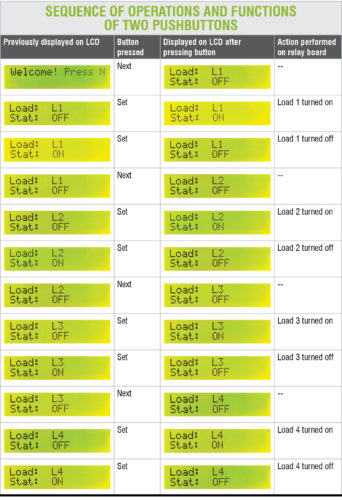 A relay is an electromechanical switch. A four-channel relay board used in this project is shown in Fig. 3. Relays used here are of single-pole double-throw (SPDT) type. In this type of relay, output side has three terminals, namely, normally open (NO), normally closed (NC) and common (C).

Arduino program uses the LCD in 4-bit mode. LCD data lines D4 to D7 are configured for reading data from Arduino. Pins 1 and 2 of the LCD are connected to Gnd and 5V, respectively, of Arduino. Read/write pin (pin 5) of the LCD is connected to Gnd. A 10kW preset is provided for adjusting the contrast of the display.

attachInterrupt(0,nbpress,rising) function calls interrupt handler nbpress whenever a signal connected to Interrupt 0 pin (pin 2) of Arduino makes a low-to-high, that is, rising-edge transition.

attachInterrupt(1,sbpress,rising) function calls interrupt handler sbpress whenever a signal connected to Interrupt 1 pin (pin 3) of Arduino makes a low-to-high, that is, rising-edge transition.

Connect the circuit as shown in the circuit diagram. Compile and upload the program to Arduino from Arduino IDE. To power Arduino, use either a normal USB cable from USB port of the computer or an external 5V DC power supply source. Alternatively, use a 9V battery at Vin pin of Arduino to power it.

Shibendu Mahata is M.Tech (gold medallist) in instrumentation and electronics engineering from Jadavpur University. Currently, he is pursuing PhD from NIT Durgapur. He is interested in MCU-based, real-time embedded signal processing and process control systems.