Analogue front ends (AFEs) are a set of analogue signal conditioning circuitry that are used to interface sensors to an ADC or a microcontroller. In applications like heart rate monitors, AFEs bear tremendous importance. Let’s find out why.

Heart rate is one of the critical vital signs in humans. For a healthy adult, it should be somewhere between 60 to 80 beats per minute. Like all other vital signs, the heart rate can change according to the person’s location, physical and mental health, and even emotions. Naturally, the heart rate increases in response to an accident, injury, or trauma. Not just that, the rhythm, strength, and the time gap between the beats of your heart can also fluctuate.

The monitoring and tracking of heart rate is a relatively simple task for modern electronics. Moreover, keeping track of your heart rate can be very helpful, not just for medical precautionary purposes but also for developing a fitness regime. That’s why modern wearable devices like smartwatches and activity trackers widely utilise the heart rate monitoring function. It is especially useful in determining whether one is exercising at the correct intensity or not. 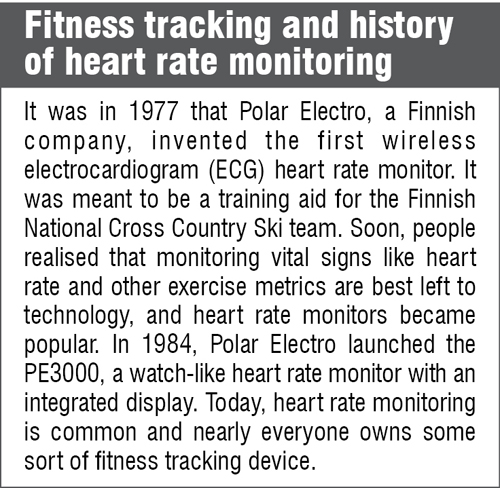 Generally, heart rate monitors employ sensors that are analogue in nature. The contractions and relaxations of the heart while it pumps blood can be viewed as electrical activities and hence, the signals or pulses are shown as waveforms. However, the controllers employed in a hear rate monitor can only interpret binary data, that is, digital signals. Hence, an analogue-to-digital converter (ADC) is needed. Moreover, the signal needs to be amplified and filtered to remove noise. 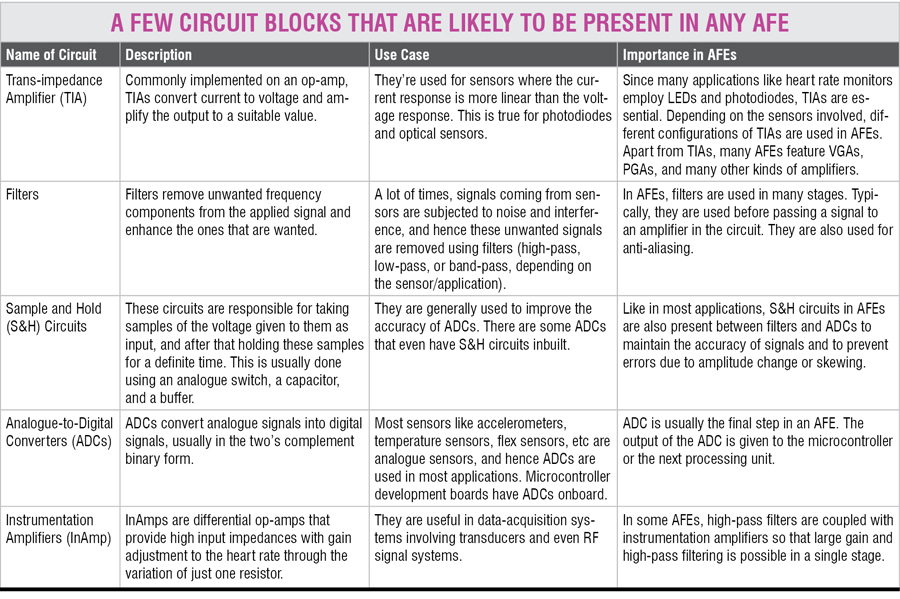 This is why AFEs are so important. They contain all the necessary components and circuitry to perform signal conditioning on the signals that come right from the sensors. In general, AFEs include analogue amplifiers, operational amplifiers, filters, sample and hold circuits, and sometimes even application-specific integrated circuits (ASICs).

There are several techniques for monitoring heart rate. All of these use different types of signals.

This technique uses the sound signal produced by the opening and closing of heart valves. As a rule, the signal is filtered and processed with the help of a digital signal processor (DSP). After proper filtering, it is possible to detect not only heart rate but also abnormalities of the heart. This is done with the help of a machine called phonocardiograph.

This technique is based on the measurement of the electric field produced by the heart. There must be two or more electrodes placed on specific points of the human body. Graphic representation of ECG consists of six peaks and valleys called P, Q, R, S, T, and U. The heart rate is measured by averaging RR interval between two R peaks (Fig. 1) over a defined period (for example, 15, 30, or 60 seconds).

Pressure sensing technique. This technique utilises a signal from a piezo sensor attached to one of the defined places on the human body, for example, on the wrist. Contraction and relaxation of the heart cause a corresponding change of pressure in the blood vessels, and therefore on the skin as well.

Photoplethysmography. This technique is based on the measurement of the volume variations of light reflected from the skin. When light emitted from an LED passes the heart through a blood vessel, the received light has pulsations that correspond to the heartbeat. Typically, a green or infrared LED is used as a light source because of the blood’s tendency to absorb light with specific wavelengths. This technique is the most common way of heart rate monitoring in wearables.

Main components of an AFE

Given in the Table on previous page are a few circuit blocks that are likely to be present in any AFE. Apart from the other application-specific circuitry present in an AFE, combinations of these blocks are present. It is important to note that for any application involving an AFE, selecting a suitable IC can be a challenge. By understanding the important blocks present in AFEs, the process of selection becomes easier and less time-consuming.

The rest of this article will look at a few AFEs that are particularly tailored for medical applications that involve heart-rate sensing. These are ICs that are not very expensive and can be easily integrated into medical or fitness tech applications.

AFE4403 by Texas Instruments. The AFE4403 is suited for pulse oximeter applications, optical heart rate monitoring as well as industrial photometry applications. This means that it employs the principles of photoplethysmography. It can communicate with microcontrollers or any processing unit using an SPI interface.

AFE4403 contains an ADC, an LED transmit section, and diagnostics for sensor and LED fault detection. Moreover, it is equipped with an oscillator that functions from an external crystal. It is highly configurable and allows the user to control the timing characteristics of the device.

The receiver channel receives the light signal from the photodiode and contains a TIA, filters, and an ADC. The transmit section contains an LED driver that turns the IR and red LEDs on and off. What’s interesting is that the transmit section has an option for a third LED to be attached, apart from the IR and red LED. This is particularly important for oximeter applications where the third LED can be used for heart rate monitoring while the other two are used for detecting SPO2 levels.

SLG47004 AnaloguePAK by Dialog Semiconductor, a Renesas company. Dialog Semiconductor proposed a design of an AFE for a heart rate monitor that is largely based on SLG47004, a programmable mixed-signal IC. Both signal processing and LED control are performed by a single SLG47004. Additional sample and hold circuitry allow greatly reduced current consumption.

The performance of the heart rate monitor depends on the optical system setup: the direction of light from LEDs, the wavelength of LEDs, the distance and angle between LEDs and photodiode. Also, the measurements are affected by ambient light and small movements of the sensor. If the heart rate signal is relatively small, like a signal from the human wrist, additional software signal processing might be required.

This proposed design, as seen in Fig. 4, is divided into eight major blocks:

The waveforms of the hardware prototype testing are shown in Fig. 5.

AD5940 and AD5941 by Analogue Devices. The AD5940 and AD5941 are high-precision, low power analogue front ends (AFEs), designed for skin impedance and body impedance measurements. Therefore, they are suited for bioelectric or biopotential measurement systems and for wearable applications too. These can even sense electrochemical toxic gases. They also contain some on-chip peripherals, including SPI serial input/output, wake-up timer, and interrupt controller.

The AD5940 can be used in conjunction with AD8232 or AD8233 to perform bioimpedance and ECG measurements. AD8232 and AD8233 are integrated signal conditioning blocks for ECG and other biopotential measurement applications.

For instance, when a bioimpedance measurement (for example, body composition, hydration, and electrodermal activity (EDA)) is required, AD8232/AD8233 are disconnected from the electrodes and AD5940/AD5941 are used. Likewise, when ECG measurements are needed, the opposite of this process happens.

These ICs have a structure different from the ones mentioned above. The AD5940 and AD5941 ICs contain two high-precision excitation loops. One is a low-power excitation loop and the second consists of a 12-bit DAC referred to as the high-speed DAC. They have one measurement channel featuring a multichannel successive approximation register (SAR), ADC with input buffers, a built-in anti-alias filter, and a programmable gain amplifier (PGA). The measurement channel enables a wide capability of measurements of a sensor under test.

AFEs are not limited to medical/fitness applications. They can be used in any application that involves analogue sensing. Many IoT applications involve sensors being connected to a microcontroller and many of these sensors are analogue in nature. However, microcontrollers like Arduino Uno do not have a good analogue resolution and sensitivity. In such a scenario, one can consider interfacing AFEs with microcontrollers.

This feature is inspired by an article written by Vladyslav Kozlov (Team Lead, Product Development Engineering), at Dialog Semiconductor, a Renesas company. The co-author, Aaryaa Padhyegurjar, is an Industry 4.0 enthusiast with a keen interest in innovation and research.