Causes Of Relay Failure In Switching Power Supplies And The Remedies

In a switching power supply, sometimes the relay contacts fail due to a short-circuit, but the product continues to work. In the long run, this damages the device, especially because it is difficult to find the failure. Relays must be modeled correctly, and contacts must be chosen wisely to prevent such instances

All devices require a power source to work efficiently. Power supplies are devices that convert electric current from a source into the voltage required to power any appliance. A power supply can be of two types—linear or switching. For the scope of this article, we will be focusing on switching power supply and analysing certain failures that are associated with it.

In the case of electronic devices, such as PCs and chargers that are driven by switching power sources, the power factor may be low because the device pulls current in a non-sinusoidal waveform. This is commonly referred to as the ‘distortion’ power factor, and it is very important to rectify it. If that is not done, the distorted power factor can cause unwanted harmonics.

In a perfect system, 100% of the power drawn from the AC mains is put to good use. However, such a scenario is too good to be true. Due to the low power factor, some of the energy from the AC source is not utilised and is lost. This increases cost and contributes to global warming too. Hence, power factor correction (PFC) is done to increase the power factor.

PFC can be done in two ways:

Second, active PFC, where a switching converter is used to modify the distorted wave into a sine wave. Because the new signal’s sole harmonics are at the switching frequency, these can be easily filtered away. This is a good approach, but it adds to the design complexity.

Input inrush current/Surge current. When you turn on a power source or electrical equipment, it generates a temporary current called inrush current. This is due to the high initial current needed to charge the capacitors, inductors, and transformers. The inrush current is also known as the switch-on surge or input surge current. It is an important performance indicator for switching power supplies.

In the case of a switched-mode power supply (SMPS), the output capacitor, which is normally big in value, can hold a huge amount of charge that is comparable to a short-circuit when not energised. The switches in the SMPS link the input source to the empty capacitor when an energy source is attached to the SMPS. This creates a low impedance path for the inrush current to flow to the capacitor. The voltage across the capacitor rises, but slowly decreases thereafter. That being said, the inrush current is large enough to damage the switches in the supply circuit, and hence needs to be designed as small as possible.

To control the inrush current, a ‘pre-charging’ circuit may be used. The conventional design is to connect a thermistor (NTC) in series on the live wire at the input of the switching power supply. For switching power supply with a higher power, a relay is connected in parallel to the thermistor (NTC) at the same time to reduce device loss and improve reliability when the product works normally.

Let us now focus on analysing the causes of contact short-circuit failure after incorporating the relay.

When the PFC circuit in Fig. 2 was applied to the product, it was found that the inrush current exceeded the standard value. This result was completely different from the theoretical calculation. According to Fig. 2, the devices that affect the input inrush current are mainly the thermistor RT1 and relay K1.

When the relay is not powered on and the normally open contact has been closed, the relay contact is short-circuited. There are generally three possibilities accounting for this failure.

Case 1. The operation frequency of the relay is too high, and the times have exceeded the switching times that the relay can bear

Case 2. The surrounding temperature of the relay is too high

Case 3. The surge current flowing through the relay is too large

After analysing each of these three cases, it was noticed that the failure was not caused by the high operation frequency of the relay or the high surrounding temperature. Hence, cases 1 and 2 could be ruled out. The failure was caused by the large surge current flowing through the relay.

The measured contact current of relay K1 is shown in Fig. 3. From the figure, it can be found that relay K1 has its peak contact current within a period of time after conduction. Since the maximum current the relay can withstand is 10A (according to the specification), and the surge current is way more than 10A, it may damage the relay contacts and lead to a short-circuit.

The cause of surge current

Apart from the surge current, there are other reasons why a relay might fail, and it is important to address them too. Some of these reasons include redundant objects inside the relay, dirt on the contact material, improper process structure, improper welding, contact ablation, adhesion, silver ion migration, and reed displacement caused by external application.

Most of these failures are caused by improper control of the relay production process. Therefore, it is critical for relay manufacturers to improve the production environment, quality control, and inspection systems to prevent frequent relay failures.

How to overcome these problems?

Designers need to be extremely careful while designing PFC circuits and must make sure to optimise the parameters given above. For example, selecting the DM inductor with a larger saturation current and reducing the capacitance of the first capacitor in the π filter would be beneficial. Increasing the PFC current sampling resistance and reducing the PFC clamping current would also help.

In addition to these, the selection of the relay is also critical. Relay contacts are made of different material, each suited for different application. Designers must first choose the relay according to the actual use requirements, and then carefully determine the required functional and physical characteristics while selecting the relay to avoid failure during use.

Here are some different relay contact materials and their properties.

Fine silver. Among all metals, fine silver has the best electrical and thermal characteristics and so is the best all-around material in the market. When used in relays, it can handle low to medium loads, AC and DC, resistive and inductive loads like solenoid valves, fans, and heaters, but not large inrush currents.

The PT570730 relay is a miniature industrial relay for general-purpose applications. It has silver contacts and is used in control and automation applications. Other applications of this relay include consumer electronics, and automotive and power management applications.

Silver nickel (AgNi). It is often used in the context of resistive load and current stability. The modest amount of nickel (10%) is mainly used to mechanically harden the silver and boost the resistance of the contact, making it more robust under higher electrical loads. It is appropriate for resistive loads at the contact’s full nominal current rating as well as other loads with lower load currents.

Silver nickel is a cost-effective and high-performing, general-purpose material that is frequently used as the standard for many power relays. When silver nickel contacts are gold plated, they are suitable for dry loads, measuring and switching circuits.

The Finder 60 series general-purpose relay is a good example of relays with AgNi contacts. It has gold-plated AgNi contacts and is suitable for industrial and shipyard applications, and road and tunnel lighting. It offers a lockable test button with a mechanical flag indicator.

Silver cadmium oxide (AgCdO). Silver cadmium oxide contacts have long been utilised to switch high-energy, arc-producing loads. They are less electrically conductive than fine silver contacts, but they have better material transfer and arcing resistance. They do have a somewhat higher contact assembly heat and a higher interface resistance between mated contacts. 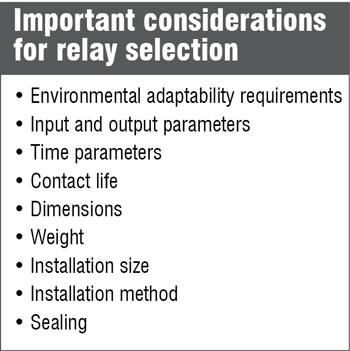 An example of a relay that uses AgCdO contacts would be the T92S7A12-240 general-purpose relay. It is a high-power relay with a wash-tight, tape-sealed plastic box enclosure. The T92-series is designed to control compressor loads and has a printed circuit board mount, printed circuit board terminal, non-latching coil, and 240V AC coil voltage. It can be used in HVAC applications.

The T9AS1D14-24 relay, which is well suited to power management and HVAC applications, has silver tin indium oxide contacts. It has an option for load connections via 6.35mm terminals.

This writeup is inspired by an article authored by the content team at Mornsun. The co-author, Aaryaa Padhyegurjar, is an Industry 4.0 enthusiast at EFY with a keen interest in innovation and research.