With full duplex realisation, a single antenna could be shared between the transmitter and the receiver.

5G standards are currently being laid out. It is estimated that 5G paradigm will be realised in 2020 with fully-set standards and entry of new devices in the market based on those standards. One such prospect is full duplex communication. With full duplex realisation, a single antenna could be shared between the transmitter and the receiver.

However, there is a fundamental physical precept called reciprocity, which does not allow sharing the antenna between the two. The only way to break reciprocity is the traditional way of using special types of materials known as ferrites.

Non-reciprocal materials are mainly realised by magnetic materials through Faraday effect. Some non-reciprocal devices—used in most modern-day communication—use a circulator.

Traditional circulators are used in radar systems. The transmitter feeds the antenna, while received energy is directed to the receiver. A powerful radar transmitter is isolated from the sensitive receiver. The same antenna can be used for both transmission and reception. This is duplexer action being performed by the circulator.

Use of a single antenna for both transmitter and receiver nodes using a conventional circulator is based on magnetic biasing of rare-earth ferrite materials. These are bulky, expensive and incompatible with standard integrated circuit (IC) technologies.

To remove the magnet, an active circulator relying on intrinsic non-reciprocal properties of transistors could be used. However, this device has never been commercialised, because it suffers from fundamentally poor noise cancellation. This long-held assumption has resulted mainly from the need for isolation between transmitter and receiver nodes. This is also known as self-interference cancellation, which needs to be greater than 100db.

Despite significant research efforts in radio frequency (RF) domain, non-reciprocal components based on magnetic materials remain incompatible with complementary metal oxide semiconductor (CMOS) IC fabrication processes. This is due to material incompatibilities and the need for a magnetic field bias, which significantly restricts their impact.

Recently, several groups have presented a new class of magnetic-free non-reciprocal devices based on linear periodically time variant circuits. These can overcome the limitation of all previous approaches.

Harish Krishnaswamy, associate professor at Columbia University, USA, has devised a way of providing a full duplex solution that can also provide the first critical 20dB – 30dB of the total self-interference cancellation (SIC). Magnetic-free, linear and passive phase non-reciprocity based on staggered communication and a highly-miniaturised RF circulator has been introduced. It embeds the phase non-reciprocal component with a ring resonator. The non-staggered communicator network does this by carefully synchronising switching along a pair of lines where reciprocity can be broken. Delay of line is one-quarter of the switching period [(t= T/4)].

Switches at the right are delayed with respect to switches on the left, by quarter of period and toggled between straight and criss-cross connections. So, when the signal entering from the left side reaches the right, the switch is toggled to straight connection, and the signal neatly exits the path.

However, when the signal entering from the right side reaches the left, the switch is toggled to the criss-cross connection and the signal experiences suppression.

Based on the above concept, a CMOS IC has been developed, having dimensions smaller than a penny. It can be integrated into circuits and, hence, uses a single antenna for both transmission and reception of signals on a single channel at the same time.

Prof. Krishnaswamy explains, “Full duplex communication—where transmitter and receiver operate at the same time and at the same frequency—has become a critical research area. It has been shown that Wi-Fi capacity can be doubled on a nano-scale silicon chip with a single antenna. This has enormous implications for devices like smartphones and tablets.”
Co-researcher, Jin Zhou, adds, “Being able to put the circulator on the same chip as the rest of the radio can significantly reduce the size of the system, enhance its performance and introduce new functionalities critical to full duplex.” 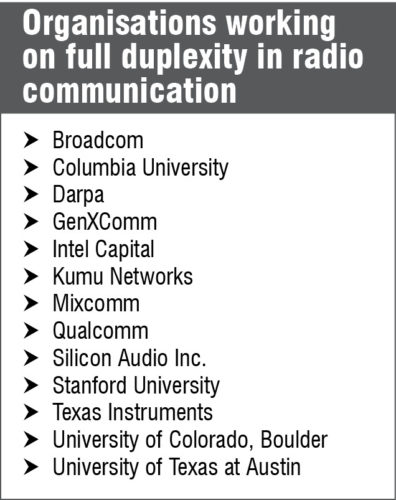 Various researches are being carried out across the world for full duplex communication. Various startups are arising around the technology around the world. These are being seed-funded under various government organisations, such as DARPA, and other venture capitalists.

A team of researchers from Department of Electrical and Computer Engineering at University of Texas at Austin (UT ECE), led by Prof. Andrea Alù, also worked on similar research. He built the first-ever circulator for sound using passive circuit components, which can be embedded on a CMOS chip. Alù is also chief technology officer, Silicon Audio Inc. This Texas-based company licensed the patented technology from UT ECE for its commercialisation in the market.

Another startup from Texas, GenXComm is working on enabling full duplex for next-generation communications infrastructure. Instead of using multiple frequencies (FDD) or time slots (TDD), its technology enables true full duplex or simultaneous transmission and reception of signals in the same channel, doubling the usage of the world’s spectrum. This technology is used by various companies for testing full duplex under 5G standards.

Kumu Network is working with SIC technology that enables radios to do what previously seemed impossible—send and receive at the same time on the same or adjacent channel(s). The company has generated practical and affordable technology for the same, and is rapidly finding its way into a wide variety of wireless and wireline communication applications.

Use of three-port IC circulators is finding applications in wireless and telecommunication technologies. Researchers are working on four-port circulators for applications in platforms that contain frequency-converting elements, including on-chip implementation for quantum information processing and nano-photonics.

Madhav Khindri is B.Tech in electronics and communication, having interests in robotics and embedded systems.