Racing drones are fast and can therefore cover long distances quickly. We can use racing drones for other applications as well such as public announcement as described in this article. The KK.2.2 flight controller used in ‘Make Your Own Quadcopter Drone’ DIY project had some problem with setup and stabilisation of the drone. But we can make a smart public announcement drone using QAV250 frame and CC3D OpenPilot hardware. The author’s prototype is shown in Fig. 1.

QAV250 drone frame being small in size, it requires a high RPM and kV rated motor for flying at a high speed and flexibility in movement. We need a smaller size flight controller and propeller that can fit in the drone frame. A motor having higher than 2,200kV rating and propellers between 12.7 and 15.2cm (5 to 6 inch) in size would do the job. But when ‘A2212’ 2200kV motors were used with 12.7cm propellers, it did not produce enough thrust to fly fast enough. Therefore larger ‘6045’ propellers of 15.2cm size with 10.2cm pitch (6-inch with 4-inch pitch) were used. 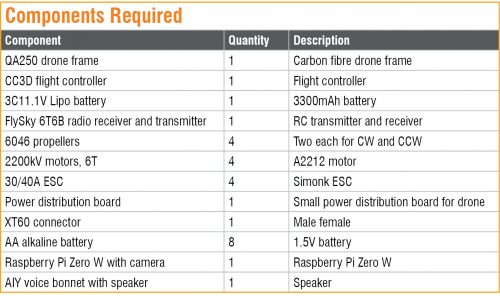 The flight controller can be programmed using OpenPilot ground control station (GCS) or LibrePilot GCS software. You can download and use any one of these. We used LibrePilot while testing.

Open LibrePilot software and connect the flight controller to a PC via a USB. From the LibrePilot software select Vehicle Setup Wizard (refer Fig. 6). From the range of options, choose to update the firmware by clicking on Upgrade and then wait for the firmware to upload on the flight controller. You will get a window (refer Fig. 7) where you can do ACC calibration.

Put the flight controller on a flat surface and enure it is facing towards the front motor. Calibrate the accelerometer and the motor ESC as per the given instructions. Disconnect the battery from the power distribution board. Then click on start and wait for a twitching/beeping sound from the motor. Repeat the procedure once again. The ESC is now calibrated, as shown in Fig. 8.

Next, add the FPV camera to drone. The FPV camera has three wires: yellow, red, and black. Flight data window shows the movement of the drone (refer Fig. 10).

Connect the red and black wires to power supply according to the requirement of your camera. Raspberry Pi camera module was used in the prototype as it was already available, as shown in Fig. 11.

AIY Voice Bonnet may be used for making and recording the announcements. It comes with an SD card that is pre-loaded with AIY Raspbian image. But if you do not have that, you can prepare the SD card using a disk imager. 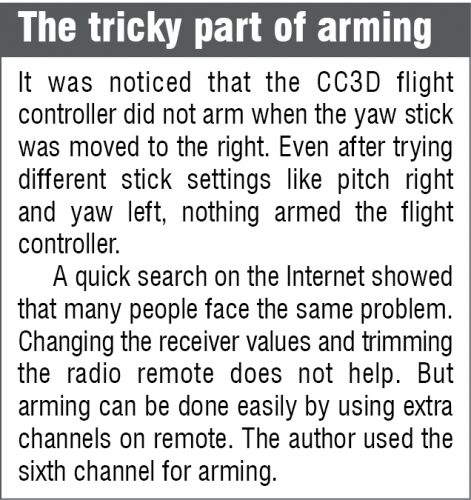 Create the code (voice_recording.py) for recording the audio through Raspberrry Pi (Fig. 12). Run the voice recording code on Raspberry Pi terminal and then press the button on the Bonnet to record the audio for public announcement. Run the code to play the audio you want to announce. Else, you can simply play the recorded file through AIY Voice Bonnet. Loudspeaker attached to the drone for public announcement is shown in Fig. 13.

Now you can fly the drone in and around the area where you want to make public announcements and play the audio.