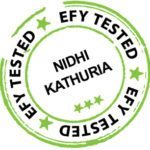 Here is a circuit for a simple but useful low-cost quadraphonic (having four channels) amplifier. It can be used for experiments in open or closed spaces, including small home labs and studios. It can also be used for the creation of audio effects and as a small audio-distribution amplifier. 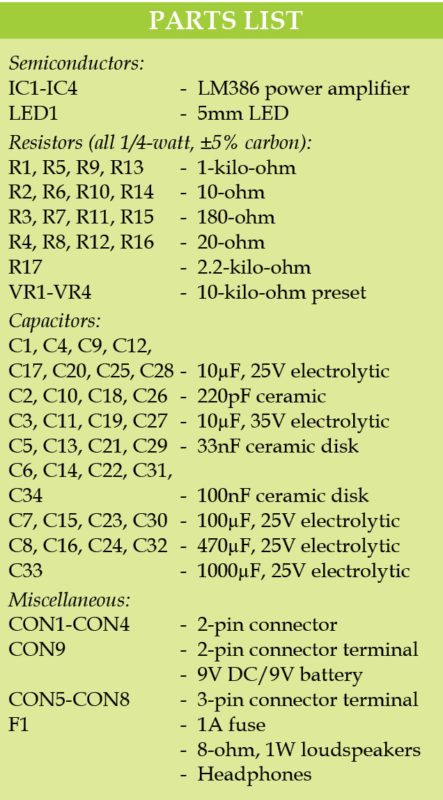 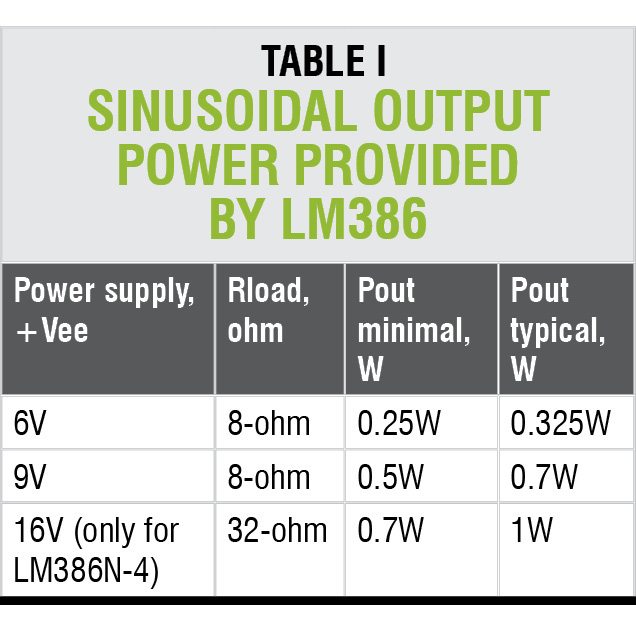 For these and similar purposes, we need a multi-channel audio amplifier. In many cases the required power per channel is in the range 0.3W to 1W. Also, preferably, the audio amplifier should be capable of working on a battery, car accumulator or simple 1A to 2A wall adaptor.

To keep this quadraphonic amplifier using LM386 simple and inexpensive, it does not have tone-control potmeters.

Circuit diagram of the quadraphonic amplifier is shown in Fig. 1. Circuits of all its four channels are identical. These have separate inputs (CON1, CON2, CON3 and CON4) and separate outputs (CON5, CON6, CON7 and CON8), which can be used for different purposes. Also, the amplifiers can be used in bridge or in parallel mode with appropriate input signals.

Inputs of the four amplifiers have separate volume-control potmeters VR1, VR2, VR3 and VR4, respectively. Input capacitors C1, C9, C17 and C25 should be preferably not polarised, which makes the circuit independent of the polarity of the DC component of input signals. Capacitors C2, C10, C18 and C26 reduce the sensitivity of amplifiers to high-frequency RFI and EMI captured by the inputs.

The circuit is built around the popular low-voltage audio-power amplifier LM386. LM386, AZ386, JRC386, NJM386 and similar integrated circuits (ICs) are easily available in the market. These are low-cost and suitable for many audio and control applications.

It is important to respect the power dissipation of LM386. In all cases, it is recommended not to go above 80 percent of the values in the datasheet. This is because everything cannot be taken into consideration at the design stage, and the IC should not operate for a long time at its maximum power dissipation.

Maximum power dissipation of DIP/DIL at +25°C is 1.25W. Table I gives the guaranteed level of the sinusoidal output power (Pout) provided by LM386.

In the datasheet, power dissipation of LM386 is guaranteed on loads of 4-ohm, 8-ohm and 16-ohm. But most parameters of the ICs are given only for a load of 8-ohm.

Generally speaking, if we accept the maximum power dissipation around 1.25W, we have the following approximate limitations:

Load of 2-ohm is not mentioned in the data sheet. So the risk of using it would be entirely upon by the user. LM386N-1 could work off +5V power supply from a USB port, if needed.
It is advised to use large copper paths on the PCB to relieve the heat from the IC. Most frequently the IC is not loaded continuously to the maximum. But for musicians practicing heavy distortions, LM386 could be overloaded. Measures should be taken not to overheat the IC. Luckily, it is not easy to damage the IC by overloading.

Each amplifier has two types of outputs. Main outputs are for loudspeakers. The loudspeakers should have impedance of at least 8-ohm and power rating of 2W, and mounted in a wooden box. Outputs with resistive dividers (1:10) are for headphones.

Connecting low-impedance headphones, for example, with 32-ohm or less, will not damage the outputs.

A single-side PCB pattern of the low-cost quadraphonic amplifier is shown in Fig. 2 and its component layout in Fig. 3.

The circuit could work with low-cost wall adaptors that provide necessary voltage and at least 1A output average current. All filtering capacitors should not be omitted, even if there are such capacitors in the external power supply.

LM386 can work successfully off a 6V battery from a motorcycle or kids’ electric car (typically 6.6V, maximum around 7.7V). The audio amplifier could work with one, two or three 4.5V batteries of type 3R12. Working with a single battery of 9V such as 9F22 is possible but not for a long time.

The amplifier gives output power up to around 1W per channel and has a wide range of applications.

Petre Tzv Petrov was a researcher and assistant professor in Technical University of Sofia (Bulgaria) and expert-lecturer in OFPPT(Casablance), Kingdom of Morocco. Now he is working as an electronics engineer in the private sector in Bulgaria.