This is a circuit for a low current high voltage power supply that can provide high output voltage. It has been implemented by using a combination of silicon diodes and zener diode. -- UPADHAYA NAGESH

A high voltage power supply is a very useful source which can be effectively used in many applications like biasing of gas-discharge tubes and radiation detectors etc. Such a power supply could also be used for protection of property by charging of fences. Here the current requirement is of the order of a few microamps. In such an application, high voltage would essentially exist between a ‘live’ wire and ground. When this ‘live’ wire is touched, the discharge occurs via body resistance and it gives a non-lethal but deterrent shock to an intruder.

The circuit is built around a transistorised blocking oscillator. An important element in this circuit is the transformer. It can be fabricated using easily available ferrite core. Two ‘E’ sections of the core are joined face-to-face after the enamelled copper wire wound on former is placed in it. The details of the transformer windings are given in the Table. 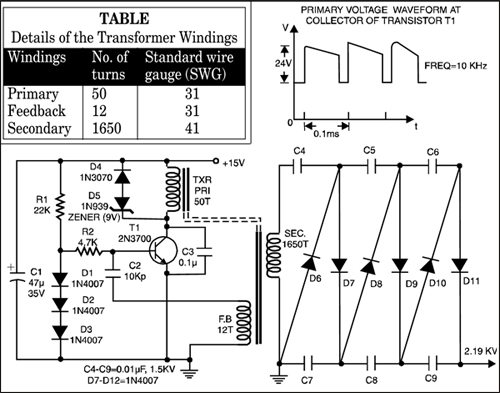 In this configuration, the primary winding and the feedback winding are arranged such that a sustained oscillations are ensured once the supply is switched on. The waveform’s duty cycle is asymmetrical, but it is not very important in this application. Please note that if the oscillations do not occur at the ‘switch-on’ time, the transformer winding terminals of the feedback or the primary winding (but not both) should be reversed.

The primary oscillations amplitude is about 24V(p-p). This gets further amplified due to the large step-up ratio of the transformer and we get about 800V(p-p) across the secondary. A simple series voltage multiplier (known as Cockroft-Walton circuit) is used to boost up this voltage in steps to give a final DC voltage of about 2 kV.

The output voltage, however, is not very well regulated. But if there is a constant load, the final voltage can be adjusted by varying the supply voltage. The present configuration gives 2 kV for an input DC voltage of 15 V. Though higher voltages could be achieved by increasing input supply, one word of caution is necessary: that the component ratings have to be kept in mind. If the ratings are exceeded then there will be electrical discharges and breakdowns, which will damage the device.