The circuit is simple, compact and low-cost. It uses two ATtiny13A (eight-pin) microcontrollers (MCUs) for both transmitter and receiver circuits.

The circuit of the joystick-controlled robot comprises a transmitter and a receiver.
Transmitter. The transmitter circuit shown in Fig. 1 is built around joystick module, fixed 5V voltage regulator LM1117-5.0 (IC1), ATtiny13A MCU (IC2), 433MHz RF transmitter module (TX1) and a few other components.

The joystick module, shown in Fig. 2, provides x-axis and y-axis control through a switch. Status of joystick movement is read by ATtiny13A MCU, which transmits the status as serial data of eight bits wirelessly through TX1.

Images of 433MHz RF transmitter and receiver modules are shown in Fig. 3.

The receiver circuit contains another eight-pin ATtiny13A MCU (IC4). It receives eight-bit transmitted data through RX1 and then sends parallel four-bit data (D3 to D0) to IC5. It contains an H-bridge to control motors of the robot. It is powered by two power supplies, 5V and 7.4V, via jumper J1 to drive motors M1 and M2. J1 is used to select 5V motor voltage or 7.4V battery voltage.

5V regulator IC3 is used for the MCU and RX1. The 5V power supply is derived from 7.4V lithium-ion or 7.4V lithium-polymer batteries. Here, 7.4V lithium-ion battery is used.
Data transmitted from the transmitter section contains eight bits of serial data; last four bits are a replica of the first four bits. This concept is useful to cross-check the correctness of received data in the receiver section. ATtiny13A does not have serial data transmission pins; hence, a separate coding is developed for serially transmitting and receiving using ATtiny13A (like PWM concept), which is explained below.

The source code is written in C language. Function sendCode is used in JoystickTx.C to transmit the code, while loop in JoystickRx.C continuously monitors the signal and then sends the proper four-bit data to IC L293D to control the motors.

Accordingly, JoystickTx.hex is generated to burn it into ATtiny13A (IC2) and JoystickRx.hex to ATtiny13A (IC4). For burning the codes, you can use any suitable ATtiny13A programmer.

A PCB layout of the transmitter section is shown in Fig. 6 and its components layout in Fig. 7. Assemble the circuit on the PCB. Connect the joystick module across connector CON1 using external jumper wires. Power supply for the transmitter is provided by 9V battery.

A PCB layout of the receiver section is shown in Fig. 8 and its components layout in Fig. 9. Make all jumper connections using external wires. Assemble the circuit on the PCB. Power supply for the receiver is provided by 7.4V lithium battery.

After assembling the circuits on transmitter and receiver PCBs without RF modules, burn/write JoystickTx.hex and JoystickRx.hex on the respective ATtiny13A MCUs using a suitable AVR programmer. Then, mount the MCUs on the respective PCBs. 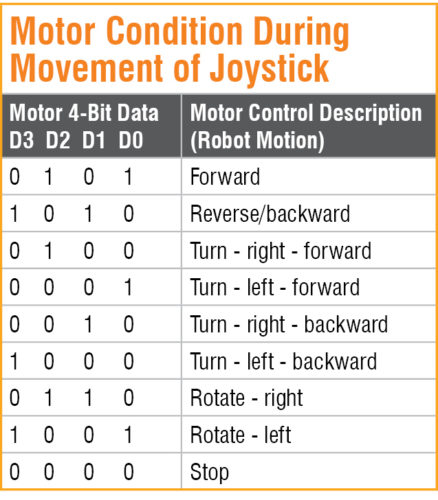