Most shunt resistors have values below one ohm. Such low values of resistances cannot be measured reliably due to range and resolution limitation of the measurement devices. These are usually measured using resistance bridges that require a special setup.

Presented here is a circuit that can measure resistances of 0.1-ohm to 1-ohm. EFY lab’s prototype of the milli-ohmmeter is shown in Fig. 1.

Circuit diagram of the milli-ohm meter is shown in Fig. 2. The circuit is built around Arduino Uno board (Board1), low-dropout regulator MIC5219 (IC1), and 16×2 LCD display (LCD1).

When current passes through a resistor, a voltage drop occurs across the resistor in proportion to the current passing through it. By using this principle, known as Ohm’s Law, the resistance is measured by using this circuit.

The resistance to be measured is connected across test points A and B in the circuit. The voltage drop across the resistor appears at analogue pin A0 of the Arduino board. The analogue reference voltage is changed to internal 1.1V reference for better resolution.

The Arduino Uno is the brain of this circuit that calculates the resistance based upon the analogue-to-digital (ADC) value and displays it on the LCD. IC1 is configured as a constant-current regulator.

Also, whenever the resistance value is beyond the one-ohm limit, it is disconnected from the circuit. If S1 is pressed again after measurement, IC1 is disabled.

Arduino Uno is a popular open source microcontroller development board based on Atmega328P microcontroller. It has fourteen digital input/output (I/O) pins of which six can be used for PWM outputs and six for analogue inputs. A 16MHz crystal, USB connector, power jack, and ICSP header can also be connected to it. It comes with preloaded Arduino bootloader, so there is no need of additional hardware to burn the Atmega chip. 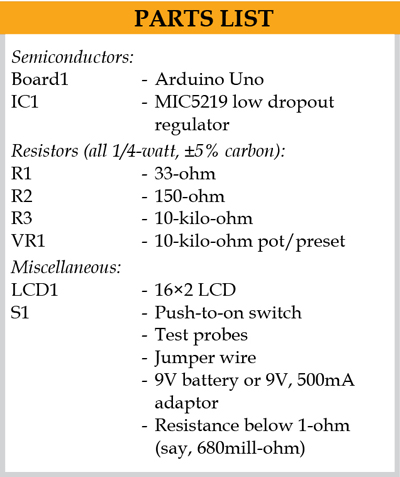 The circuit uses the software program loaded into the internal memory of Arduino Uno for operation. The program mR_Meter.ino is written in Arduino programming language known as Sketch. An Arduino IDE is used to compile and upload the program.

An actual-size, single-side PCB for the milli-ohm meter is shown in Fig. 3 and its component layout in Fig. 4. Before using the circuit, do not forget to upload the source code mR_Meter.ino by burning it into the microprocessor in Arduino Uno board.

After assembling the circuit on PCB, enclose it in a suitable box. The test switch S1 should be fixed at a convenient position in the cabinet so that it can be used easily.

The Arduino Uno can be powered by a 9V battery or a 9V, 500mA adaptor. Use a suitable connector for test points A and B for connecting the test resistance to be measured.