Measurement of liquid level in process tanks for monitoring and/or controlling is essential in process industries. In process plants, tanks contain various liquids that are generally costly. Some of the liquids are inflammable and corrosive as well. Therefore, it is very much essential to monitor the level of liquid in a tank so that it doesn’t overflow from the tank.

Various methods are used to monitor the level of liquids, and the selection of technology to be used is based on several factors like:

If the detector is mounted at the top of the tank, the pulse travels in air at a speed of 331m/sec at 0°C. Therefore the time of travel is an indication of the depth of empty space above the liquid in the tank. In case of water at 25°C, an ultrasonic pulse travels at 1505m/sec. For testing, we mounted the detector on top of a glass jar and the liquid used was water. The author’s prototype is shown in Fig. 1.

The project consists of two parts: A transmitter unit built around Arduino Uno, an HC-05 Bluetooth module, and an ultrasonic sensor module (HC-SR04). The receiver unit is your Android smartphone with an Android app installed. The circuit diagram of the project (transmitter) is shown in Fig. 5. The major components used in this project are:

Arduino Uno. Arduino Uno is an AVR ATmega328P microcontroller based development board with six analogue input pins and fourteen digital I/O pins. The microcontroller has 32kB ISP flash memory, 2kB RAM, and 1kB EEPROM. The board provides the capability of serial communication via UART, SPI, and I2C. The microcontroller can operate at a clock frequency of 16MHz. The HC-05 Bluetooth module and ultrasonic sensor module (HC-SR04) are interfaced with the Arduino Uno.

It has four pins—echo, trig, Vcc, and GND. The basic working principle of the module is as explained here.

Trig(trigger) pin is an input pin. It is made for a high pulse of at least 10µs duration, on receipt of which it automatically sends eight sonic bursts of 40kHz (ultrasonic signals). This signal, after reflecting from the object/water, is received by the echo pin.

The echo pin is an output pin. It goes high for a period of time, which is equal to the time taken for the ultrasonic wave to return to the sensor. The echo pin provides the travelling time of the sound wave in microseconds.

The connection diagram of the ultrasonic module with Arduino is shown in Fig. 5.

The ultrasonic sensor measures the distance between the sensor and object/liquid by sending an ultrasonic wave and calculating the time required for the echo to return. If the time between the trigger and echo is known, the distance of the object can be calculated by simply multiplying half of the time with the speed of sound in air. This principle is used here to detect the level of water in a tank. The working of the sensor is illustrated in Figs 6 and 7.

As shown in Fig. 6, when the tank is empty, the ultrasonic wave hits the bottom of the tank and gets reflected. As a result, it detects the depth of the empty tank at ‘H’ height.

If the tank is filled with water up to ‘h’ height, the ultrasonic wave is reflected from the water surface, and it detects the depth of empty space ‘y’ above the water, as shown in Fig. 7.

Download the ‘smart_water_level.ino’ source code to the Arduino Uno board. The ‘Level Monitoring’ application is installed on the Android smartphone. Next, turn on the Bluetooth on your smartphone.

When you power on the circuit (transmitter side), the HC-05 Bluetooth module gets paired with Bluetooth on your Android smartphone. The default passkey is ‘1234’ or ‘0000’.

After successful pairing, open the ‘Level Monitoring’ app from the smartphone and press the Bluetooth logo. You will get a list of Bluetooth devices detected by your smartphone. You need to select an HC-05 device from the list.

After a successful connection, you will get a ‘Connected’ message on the main screen of the application. The Android application will now start to display the water level data received from the transmitter side.

Assemble the circuit, as shown in Fig. 5, and place the ultrasonic sensor at top of the vessel/container whose liquid level you want to measure. For troubleshooting, you can check voltages at different test points, as shown in Table 1. 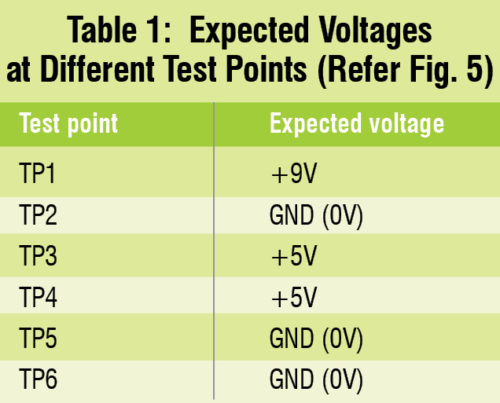 A screenshot of the smartphone displaying the water level=9cm during testing is shown in Fig. 8.