Make Your Own Joystick for Robot

Here is a simple joystick to control a robot to move in forward, backward, right, left, clockwise (CW) and counter-clockwise (CCW) directions using six buttons. It is cheaper than most other joysticks available in the market. The author’s prototype is shown in Fig. 1.

Circuit diagram of the joystick for the robot is shown in Fig. 2.

Logic for each move, like forward, backward, left, right, CW and CCW rotations, is based on the truth table using 6×4 encoder circuit formed by IC1, IC2 and IC3 logic gates. On pressing any one of the six switches (S1 through S6), a corresponding binary-coded decimal (BCD) code is generated as per the truth table.

Outputs of IC1 and IC2 are fed to input pins 1 and 5 of IC3 (NOT gate), respectively. Before feeding the signals to IC3, code generated is 1010. But after passing through IC3, output becomes 0101. This is the required logic for moving the robot in forward direction as per the truth table.

Similarly, when backward switch S4 is pressed, it makes output gate N4 of IC1 and output gate N2 of IC2 go high. Before the signals reach IC3, code is 0101, and after passing through IC3, it becomes 1010. This is the required logic for moving the robot in backward direction as per the truth table.

Output codes generated for all input switches are available at connector CON2.

An actual-size PCB layout of the joystick for the robot is shown in Fig. 3 and its components layout in Fig. 4.

After assembling the circuit on the PCB, connect a 5V DC across CON1. Connect all LEDs (LED1 through LED4) to the front panel for indicating output. LEDs will glow according to the code generated, indicating high (logic 1) or low (logic 0) status. That is, status of each input switch can be checked through the glowing of the respective LED and the truth table. 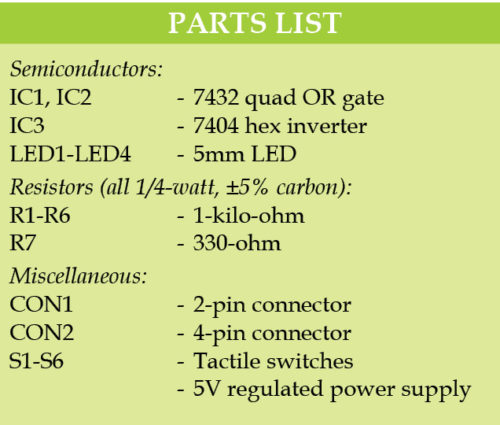