HDL and FPGA: From Gates to Microprocessors 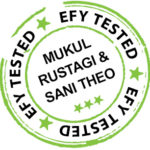 Digital designs can be described precisely and concisely using hardware description languages (HDLs) like Verilog and VHDL. Both languages are capable of digital circuit modelling, design and verification but have unique sets of strengths and weaknesses.

Digital circuits find applications ranging from control systems through RADAR to communications. A vast range of application areas has been possible due to fast modelling and prototyping using HDLs and reconfigurable hardware like field-programmable gate arrays (FPGAs). FPGAs are a sea of configurable circuits or logic blocks (CLBs) embedded in a matrix of switches. CLBs consist of look-up tables, flip-flops and multiplexers, which can be connected to realise a digital operation. A number of CLBs can be networked together to form entire digital systems. One such digital system is a microprocessor.

This article focuses on design and implementation of microprocessor data path. Here we use Xilinx Artix 7 family of FPGAs and VHDL. For prototyping, numerous prototyping boards are available. We have used a Digilent Nexys 4 DDR board.

Data path operates on operands stored in internal data registers and stores the result in another data register. Fig. 1 shows data path under the control of control path. Control path issues control words to data path in proper sequence and at proper times in order to control the operation on data. Data path generates status signals, which may provide valuable feedback to control path.

Data path shown in Fig. 1 has data input, control word input, status word output and data output. Width of data word is specified in bits. For our designs we have a generic that stores data width and can be altered globally.

Register file is a set of local registers used by data path. There is one input and two output ports. The two outputs are the two input operands to the ALU or the multiplier. The input is used for writing to one of the registers. Write register is selected by the write address and two read registers are selected by the two read addresses.

One of the two operands passes through a barrel shifter. Barrel shifter shifts the bits by specified count to left or right. The new bits on the left or the right are 0s or rotate around of the word.

The various parts included in Fig. 2 are discussed along with VHDL codes in the following sections.

Xilinx Vivado is used as the synthesis tool (Fig. 3). It manages design, synthesis, implementation and device configuration. The flow is as follows:

Fig. 4 shows a multiple-bit buffer along with MuBuff.vhd code. The output assumes the same value as the input if En is high. Else, output bits are high impedance. You can see the 1’s and 0’s bits on the LEDs. Fig. 5 shows its implementation on the Nexys 4 board.

All the components in the project are added to upcomp library; SubComp is a package in the library that has declaration of all the components for hierarchical designs. The complete SubComp.vhd code is included in EFY DVD of this month. The code is simulated, synthesised, implemented and validated on the Nexys 4 board.

Arithmetic and logic unit is the heart of data path. It performs one of the multiple arithmetic and logic operations selected by the select lines. Table I shows various operations that the ALU performs on two operands ‘a’ and ‘b.’ Subscript ‘i’ represents the i-th bit. Inputs ‘a’ and ‘b’ are transformed into ‘x’ and ‘y’ as per the table. Intermediate bits ‘x’ and ‘y’ are fed into multibit full adder. Full adder is designed using half adders. 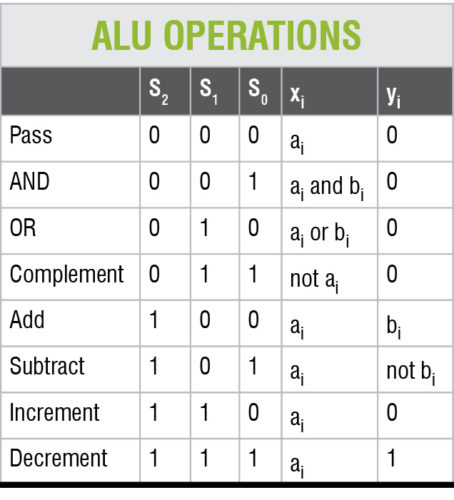 The Transform1bit.vhd code explains bit transformation circuit as per the truth table in the table. The ALU is designed using full adder and bit transform circuit. The code implementation is given in ALUnbit.vhd.

Digital signal processing (DSP) requires fast multiplication of two numbers. If both the numbers are of certain width, the result of multiplication is twice the width. This requires two words that represent lower and higher significance. The output can be multiplexed.

The output of the multiplier or ALU is forwarded through a multiplexer to universal shift register. Universal shift register is capable of bit-by-bit left and right shift with or without rotate option. The basic unit of a register is a D-type flip-flop with asynchronous clear. The code below shows a D-type flip-flop with asynchronous clear:
— D flip flop with clear—DFlipflop.vhd
library IEEE;
use IEEE.STD_LOGIC_1164.ALL;
entity Dflipflop is
Port ( d,clk,clr : in STD_LOGIC;
q :inout STD_LOGIC:=’0’);
end Dflipflop;

architecture MUX221 of MUX2to1 is

Data path has a set of addressable registers whose control signals and input and outputs are interfaced to common input and output ports, respectively. Such a set is referred to as register file. Width of the register is set by generic ‘width.’ Address width is ‘n,’ resulting in 2n=m registers. There is one input port and two output ports (Port A and Port B). Write address chooses the register to which input word is written at the falling edge of the clock. Write address is decoded by the address decoder. Port A receives the output of the register referred to by Port-A address. Port B receives the output of the register referred to by Port-B address. Two address decoders are used to read a word. Each register consists of multiple D-type flip-flops. D-type flip-flop is modified to include Enable signal that gates the clock input. The DFFEn.vhd code implements D-type flip-flop with Enable signal.

Address decoder has ‘n’-bit-wide input and 2n=m bit output. All the output bits are ‘0,’ except the one referred to by the input, which is ‘1.’ The AddrDec.vhd code implements VHDL code for the address decoder.

Data path requires a large number of I/Os, which Nexys 4 board does not support. This requires Virtual I/O and logic analyser IP integration into the project. Further development of a processor is beyond the scope of this article, but interested readers can refer to related material on the Internet.

This article introduced the readers to data path design of a microprocessor. The architecture is open to modifications and readers can come up with innovative ideas to implement data paths for modern microprocessors.