This mobile phone detector can sense the presence of an activated mobile phone from a distance of four to five metres. So it can come handy in an examination hall or meetings where mobile phones are not permitted.

The circuit can detect incoming and outgoing calls, SMSes, Internet and video transmissions even if a mobile phone is kept in silent mode. When it detects an RF signal from an activated mobile phone, its LED starts blinking and continues to blink until the signal stops. The author’s prototype is shown in Fig. 1.

When a mobile phone is active, it radiates RF signal that passes through nearby space. The signal contains electromagnetic RF radiation from the phone.

Capacitor C1 is used in the circuit to detect the RF signal from the mobile phone. When the mobile phone radiates energy in the form of RF signal, C1 absorbs it and passes on to the inputs of IC1. This is indicated by the flashing of LED1. Preset VR1 (2.2M) is used to vary the range of the circuit. Transistor T1 is used to amplify the signal obtained at pin 1 of IC1.
The circuit is applicable for 2G networks, GPRS and network search (manual/automatic). It does not detect 3G, WCDMA and HSDPA network signals so well.

A single-side PCB layout for the mobile phone detector circuit is shown in Fig. 3 and its component layout in Fig. 4. After assembling the circuit on the PCB, enclose it in a suitable plastic box. 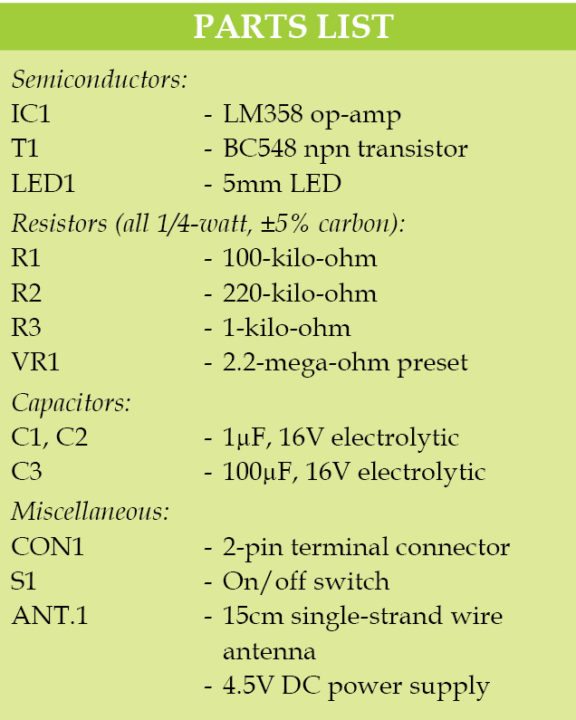 The circuit works off a 4.5V DC power supply.

Kumar Abhisekh is an electronics hobbyist