All Indian Railway Permanent Way offices monitor rail tracks to record their maximum and minimum temperature of the day at hourly intervals. It is done to check the metal shrinkage during winters and expansion during hot weather. This is required for track maintenance activities such as hot or cold weather patrolling, packing of gaps found in the tracks, checking long welded rail (LWR) tracks, and other issues that could cause derailment and mishaps.

This GSM-based device will keep the concerned officer informed about the track temperature on his mobile phone with a text message from a designated SIM card in the circuit on hourly basis. The author’s prototype is shown in Fig. 1.

Circuit diagram of the rail track temperature monitoring system with hourly updates is shown in Fig. 2. It comprises an Arduino Nano board, an A6 GSM module, and a DS18B20 temperature sensor.

The circuit can be powered by any 5-volt, 2-amp regulated DC power supply connected across CON1. The 5-volt supply thus goes to Vin pin of Arduino Nano and Vcc pins of GSM module and DS18B20 sensor.

The temperature sensor (DS18B20) has three pins, one of which is connected to 5-volt supply, another to GND pin, and the third to pin D4 of Arduino. The 4.7-kilo-ohm resistor R1 works as pull-up resistor.

The GSM module needs an antenna to get proper signal strength to connect to the mobile network. The SIM card in GSM module should get uninterrupted SMS service.

Arduino Nano is a compact board based on ATmega328 microcontroller that has easy USB connectivity for programming on Arduino IDE. It has Vin and ground pins to power it from external power supply.

For programming the source code using Arduino IDE, first connect the Arduino board to a computer through USB and then select Arduino Nano board and COM port from Tools menu. Then upload the code (labtest1railtrack.ino) to Arduino board. 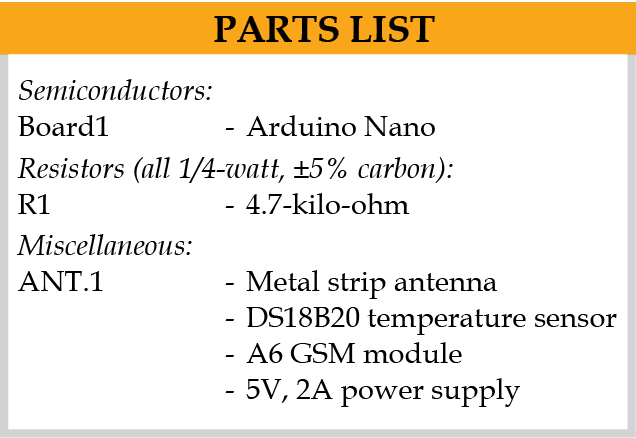 After assembling the circuit on a Veroboard, connect it to a 5-volt DC power supply rated at two amperes—like a mobile charger. Now, as per the program, the set up condition will start and send AT code ATH to stop any incoming call (in SIM card), so that it may enter into the loop section.

In loop section, it will again send an ATH code and then send AT command to the GSM module for sending a text message. After the sending process is complete, it includes the temperature sensor data, packs it, and then sends alert message, such as “Rail Track Temperature is 40°C.”

Note that you need to connect a metal strip as antenna to the GSM module. The author’s prototype with antenna (ANT) assembled on a Veroboard is shown in Fig. 3. Enclose the circuit in a suitable plastic box and install it close to the railway track to be monitored, as shown in Fig. 4.