This table will help you with managing resistor color code so that you don’t burn up your circuit due to a wrong resistor.

Right below this image is a little tutorial to help you with the same thing. Have fun!

Resistors are available in a range of different resistance values from fractions of an Ohm (Ω) to millions of Ohms.

Values of resistance, tolerance, and wattage rating are generally printed onto the body of the resistor as numbers or letters when the resistor’s body is big enough to read the print, such as large power resistors. In most cases, when the resistor is small such as a 1/4 W carbon or film type, these specifications will be color-coded. These colored painted bands produce a system of identification generally known as Resistor Colour Code.

An international resistor color code scheme was developed many years ago as a simple and quick way of identifying a resistor’s ohmic value no matter what its size or condition. It consists of a set of individual colored rings or bands in spectral order representing each digit of the resistors value.

The resistor color code markings are always read one band at a time starting from the left to the right, with the larger width tolerance band oriented to the right side indicating its tolerance. By matching the color of the first band with its associated number in the digit column of the color chart below the first digit is identified and this represents the first digit of the resistance value.

What are tolerance codes?

Colours on the resistor like brown, red, green, blue, and violet are used as tolerance codes on 5-band resistors only. The blank (20%) “band” is only used with the “4-band” code (3 colored bands + a blank “band”). 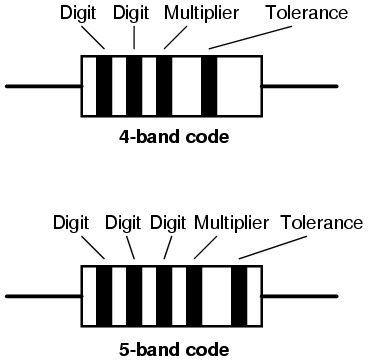 In this picture, you will see it colored Yellow-Violet-Orange-Gold. This equates to 47 kΩ with a tolerance of +/- 5%.

Here we have a resistor colored Green-Red-Gold-Silver, which would be 5.2 Ω with a tolerance of +/- 10%.

A resistor colored White-Violet-Black would be 97 Ω with a tolerance of +/- 20%. When you see only three color bands on a resistor, you know that it is actually a 4-band code with a blank (20%) tolerance band.

A resistor colored Orange-Orange-Black-Brown-Violet would be 3.3 kΩ with a tolerance of +/- 0.1%.

A resistor colored Brown-Green-Grey-Silver-Red would be 1.58 Ω with a tolerance of +/- 2%.