Resistor values are selected after analysis for a given application. For most of the regular circuits, 1/4W resistors with ±5% tolerance carbon composition or carbon film resistors are used. However, for power applications, wire-wound, ceramic, and metal alloy resistors are commonly used.

For commercial circuits or professionally designed circuits, the designer has to consider many other parameters as well while selecting a resistor for the circuit. It may involve scrutinising and analysing the datasheets provided by the manufacturer of the resistors.

For example, the standard resistances under E12 series are 10Ω, 12Ω, 15Ω, 18Ω, 22Ω, 27Ω, 33Ω, 39Ω, ….till 10MΩ. The values in the range are chosen such that they follow an exponential curve, and when you replace your calculated value with one from the preferred range, the error will be within a fixed percentage. Some resistors are colour coded to indicate the values or ratings while some resistors have the values printed with numbers or letters on the bodies. 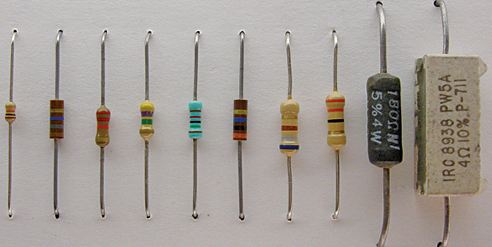 Different types of fixed resistors commonly used in the circuits are shown in Fig. 3. The most common process of selecting a resistor for a given application involves the following steps: