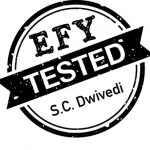 200 millivolts. With such devices lower-value measurement becomes difficult, especially for DIY projects. Here is a circuit that can measure low voltages, starting one millivolt onwards, with better resolution.

Circuit diagram of the millivolt meter is shown in Fig. 1. It is built around Arduino Uno board (Board1) and 16×2 LCD display (LCD1).

The voltage to be measured is applied at analogue input pin A0 of Board1 through test probes T1 and T2. The analogue reference voltage is changed to internal 1.1V for better resolution.

Arduino Uno is a popular open source microcontroller development board based on ATmega328P microcontroller. It has fourteen digital input/output (I/O) pins, six of which can be used as PWM outputs and six as analogue inputs. It includes a 16MHz crystal, USB connector, power jack, and ICSP header and comes with pre-loaded Arduino bootloader in its ATmega328P chip. 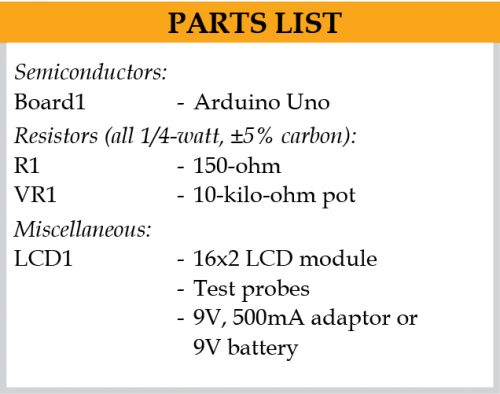 You can assemble the circuit on a PCB or breadboard. The Arduino can be powered by an external 9V battery or a 9V, 500mA adaptor. After uploading the source code (mV_Meter.ino) to Board1, connect it to LCD1. Use test probes for better accuracy and low attenuation.

Note. This circuit measures only low voltages of 1mV to 1V. Do not try to measure negative voltages, or reverse the polarity of the cable, as it would destroy the Arduino. There may be a small tolerance (deviation) in the readings due to parasitic elements in the PCB.