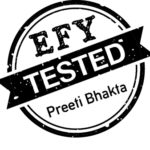 Here, the buzzer is emulated by using a keyboard having six switches indicating six candidates. Arduino continuously scans the keys and records the key numbers, one through six, to see which one is pressed first. Key numbers are also displayed on an LCD to indicate which key is pressed first. The authors’ prototype of the project is shown in Fig. 1.

The circuit diagram of the fastest finger first system using Arduino is shown in Fig. 2. It is built around Arduino Uno board (board1), 16×2 alphanumeric LCD (LCD1), six tactile switches and a few other components.

Main components used in this project are:

In this project, a 1×6 matrix keyboard is used as the input device. The row is connected to ground and the six columns are connected to Arduino analogue input pins (A0 through A5) and 5V individually through 1-kilo-ohm resistor.

Preset VR1 is used to control contrast of the LCD.

Whenever a key is pressed, an LED (LED1), which is connected to digital pin 13 of Arduino, glows for 0.5 seconds.

As observed from Fig. 2, digital pins 12, 11, 5, 4, 3 and 2 of Arduino are connected to RS, E, 4, 5, 6 and 7 pins, respectively, of the LCD. When no keys are pressed, Arduino reads 5V from each column. If more than one key is pressed, Arduino reads 0V from the corresponding column of the fastest pressed key while rejecting the readings from other keys. For example, if 1 is pressed before 6, then A0 pin will be read by Arduino. 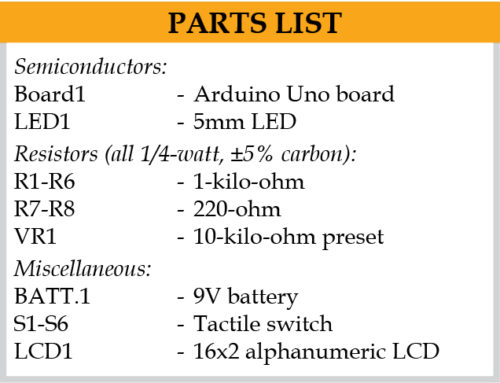 The source code is written in Arduino programming language. ATmega328/328P is programmed using Arduino IDE software. Select the correct board from ToolsBoard menu in Arduino IDE and burn the program (sketch) through the standard USB port in your computer.

Serial.begin(9600) function initialises the serial port with a baud rate of 9600.

An actual-size PCB layout of the fastest finger first system is shown in Fig. 3 and its components layout in Fig. 4. Assemble the components as per the circuit diagram on the PCB and connect the 9V battery. After this, the LCD will display “Start the game” message, and users have to press the switch. Then, it will display the number assigned to the candidate who pressed the switch first.