What If I say now Drones can find criminals and use AI to detect the face of criminals help gov to find criminals, lost people. Yes, It’s true you can now make own drone at a very low cost that is capable of doing all these stuff of its own and help the government to find the people and criminals, terrorist, find the bunkers and any more things in very low cost and at very effective way. You can make this by yourself. So here we develop and design a AI drone that we can fly and we equip it with SOC like RPi 4/ Balena fin running the image processing code independently without affecting the flight controller and detect the people and recognize the face and find the criminals..We make a drone with an F450 frame using the 1000kv Motor.

First of all we need to collect the following components to make our drones. 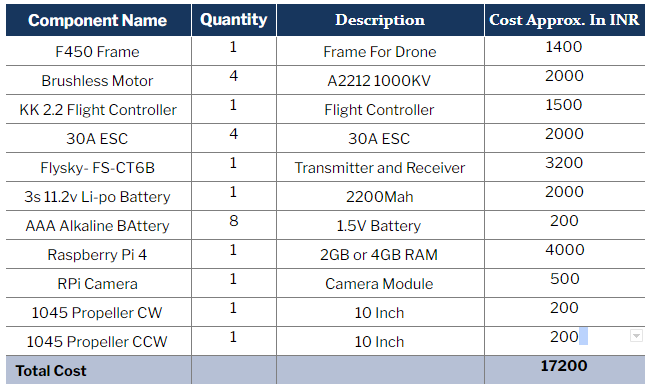 In Addition of this you might also need Xt60 or any other connector as per your battery.

We have already made and constructed the simple F450 drone and you can construct the drone using the article – >F450 Drone with KK.2.2 Flight controller

At first, I tried mounting the Drone with RPi Compute Module and Balena fin having 1GB of ram and 16 GB of storage, and as the Balena fin take 12V dc so it’s easy to power it with Lipo battery but the problem I faced it is it is little heavy and large to mount on Drone. Then I realized that RP4 takes 2A and 5 Volt of current that can also be power by one of the Linear  ESC that I am using with Motor.

So here I have switched the Blaenafon with the Small RPi 4.

Mounting the Rpi 4 and Camera On F450 Frame

Now for face recognition we mount the Rpi Camera on drone frame and fix it with insulation tape or Zipper then we cut the +ve and -Ve wire of one of ESC that is connected to the flight controller as Flight controller board usages only first ESC Pins to Power it self and rest ESC powering pins are free so we use it to power the Raspberry Pi.

Next we mount the camera moule of RPi on the Drone as in pic below .

Coding the drone for Face Recognition

This is to recognize the person in front of the robot (known or unknown). In this code, we will import 3 modules: face recognition, cv2 and numpy. We will create different arrays for recognising faces and names. Make sure to write the image file name of that member for correct face recognition. (Refer fig 4 and 5).

In the next part of code, we will try to match the face that has been captured by the camera with the array of known faces. If the face matches, then the code will run the espeak synthesizer to speak the person’s name using the syntax ‘espeak.synth ()’ as in the pic below to do announcement like hey you are cathed , please drop your gun, or the criminal find or any thing that you want to say drone on finding that person.

Next connect the pam amplifier as below connection diagram and power the pam ampligert using GPIO pin 5v and GND of Rpi 4.

Person Detection to Find Stucked One in Flood & Earthquake

To install the above libraries, open the LX terminal and then type the following commands:

After the installation you can now proceed with the cloning of TF modules and examples and files using the following command:

After successfully cloning, go to the directory →  research folder → create a new Python file and paste the code attached with the article.

For Crowd detection and traffic monitoring we need to so some presutup before coding , First presetup is making a special .pbtxt file that contain the name of thing to detect here we want our drone to detect is people so we got Tensorflow-->models-->research->object detection-->data folder  then we create one file name crowd.pbtxt and then we insert only people in the list to detect and then one more file with traffic.pbtxt with list of object to detect for traffic like car, bus, people, sign board , truck etc as in(Fig 8,9,10)

Now In the first part of the code, we have to initialize the required library. Then we will have the code that uses the camera module to take live video and then process it frame-by-frame to detect the people. So here as you can see in the code snippet we have imported the required library code.

NOTE:- We also do the forest survey and animal detection with same code we only need to change the .pbtxt file and create a file with list of animals to be detected and then in substring we will change the string name to find in output results.

You need to run each code (drone- code1.py, dronecrowd.py, and dron- etraffic.py) separately at different times for different applications. For example, when the droncode1.py is up and running, mount it on the drone. You can see live images being captured by the camera on your com- puter screen. You can send the drone with camera to a designated area for detection and monitoring. The dis- tance the drone can fly depends on the Wi-Fi range.