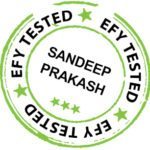 In this article we describe how to create a game station entry card so that a player can enter the game station only once using that card.

A radio-frequency identification (RFID) reader, a few RFID tags, an ARM LPC2138 development board as hardware and Visual Studio 2013 as the software programming tool installed on a PC running Windows OS are used to create this game station entry card software. To limit the scope, this article does not deal with details of the hardware.

C# (or C sharp) program is used for coding on Microsoft Visual Studio 2013 environment. The software collects data from an RFID tag/card through an RFID reader and writes it to the COM port that is opened by C# program (a console application). The program can automatically detect any passive RFID tag.

Transmit (TX) pin of the RFID reader is connected to RXD1 (pin 34) of LPC2138 chip (not shown here). When an RFID tag is swiped against the reader, data is first sent to LPC2138 board. A set of four LEDs on the board glows to indicate detection of signals. If the card is swiped again another set of four LEDs will glow to alert the user. Depending on the tag number read by the program, the number of times the card is swiped by a particular player gets displayed on the computer screen.

LPC2138 board from Robokit is used here for serial communication and to drive the LEDs for indication. Baud rate of serial communication is set to 9600. Note that, you can use any other board that has a minimum of two UARTs, with first UART interface to a PC and second to an RFID reader. Connect the board to a PC using USB-to-serial converter as shown in Fig. 1. Pin 19 (TXD0) and pin 21 (RXD0) of LPC2138 chip are connected to receive (RX) and transmit (TX) pins of USB-to-serial converter, respectively.

Source code for LPC21XX development board (arm_lpc2138_rfid_0v2) and a test application for the setup generated after building the project, driver software (driver1_ch340 and cp210x_vcp_windows) are included in source code provided at the end of the article.

1. Open Visual Studio 2013 in administrator mode (if not in said mode by default).

3. A dialog box will open. Under Visual C#, choose Console Application as shown in Fig. 2.

5. Copy and paste the code provided at the end of the article.

7. It may give the error message ‘A 64-bit debugging operation is taking longer than expected.’

8. To solve this, right-click on Solution. Go to PropertiesBuild. Change platform target to x86 as shown in Fig. 3.