Using this program, a 24-bit bitmap image file can be converted into an 8-bit bitmap file. During this process, the colour information is lost, resulting in a greyscale image. -- Vivek Dinesh

Digital computers store pictures as strings of binary values. The entire picture is divided into a number of pixels—the smallest elements of the picture. The colour and intensity values of each pixel are encoded and stored as a file. Additional information such as width and height of the image, resolution and size is stored along with the image data.

Using this program, a 24-bit bitmap image file can be converted into an 8-bit bitmap file. During this process, the colour information is lost, resulting in a greyscale image.

Fig. 1 shows the main sections of a bitmap file. The file header is followed by the information header. If the image is indexed colour, the palette (colour table) follows. The image pixel data forms the last part.

The file header consists of a signature and offset, or starting address of the image data. The information header consists of image parameters like width, height, type of compression and resolution. A 24-bit BMP file usually does not have palette, but for an 8-bit BMP file palette is necessary. Image data contains the values of all pixels one by one.

RGB-to-greyscale conversion
A colour image consists of both colour and intensity information, whereas a greyscale image consists of only the intensity information. The total intensity of a pixel can be estimated by knowing the intensity of each colour in the pixel. To do this, first the RGB values of each pixel are extracted from the image. Then their average is found, which gives the total intensity of that pixel. This process is repeated for all the pixels in the image. Figs 2 and 3 show a 24-bit input file and an 8-bit output file.

Program
The program (image.CPP) is written in C++ and compiled using Turbo C++. It performs five main functions:
1. Obtain the input and output file names from the user
2. Fetch the input file from the hard disk
3. Read the input file and extract pixel values
4. Find the average value of each pixel
5. Create the output file and modify the header suitably

In a BMP file, the first 54 bytes form the header. In a 24-bit BMP file, the image data begins soon after the header. The values of each pixel can be read in the order of blue, green and red. Each of these can have a value between 0 and 255. The average value is found as (R+G+B)/3. The process is repeated for all the pixels. This forms the new image data.

To create the output file, first the 54-byte header is copied from the input. The value of the number of bits per pixel located at offset 28 in the header is changed to 8. Then the palette is created and appended to the output file. Each entry in the palette consists of four values. Of these, three values correspond to blue, green and red, respectively, and the fourth is always zero. 256 entries are made in the palette. Now the image data obtained by taking the average of colour information is appended to the output file. The value of offset to the start of the image (10 in the header) is also replaced with a new value. Now the output file is ready and can be viewed using any image viewer software. 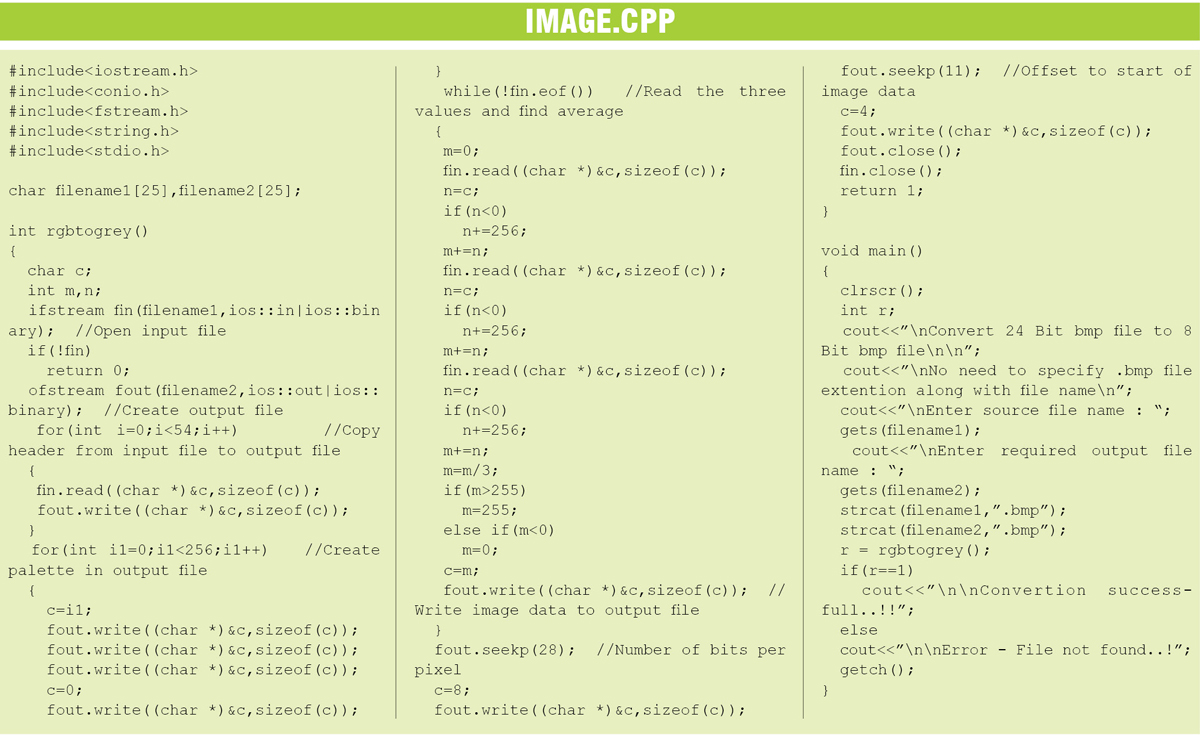 Most digital cameras store photos in JPEG format. To convert it into BMP, first open it in MS Paint. Then go to File menu and click ‘Save As’ option. Change ‘Save As Type’ option to 24-bit bitmap and click ‘Ok’ button.

The author is a B.Tech in electronics & communications and a hobbyist designer of electronic circuits, software and websites

Check out other articles related to Image processing: click here