Here is a simple solid-state relay (SSR) driver circuit using a transistor. An SSR is similar in operation to a traditional electromagnetic relay with movable/physical contacts. It employs an optical semiconductor, called photocoupler, to isolate input and output signals; and switching elements such as thyristor, triac, diode and transistor. An important feature of this IoT project is that it does not use switching contacts, and so there are no physical wear and tear problems.

The circuit can be powered from a 5V DC supply. Transistor T1 and associated components, resistors R1 and R2, make it possible to accept DC control signal from other circuits like MCUs. Collector of T1 is connected to input of SSR1 to sink current from the positive rail, and its emitter is connected directly to ground rail. 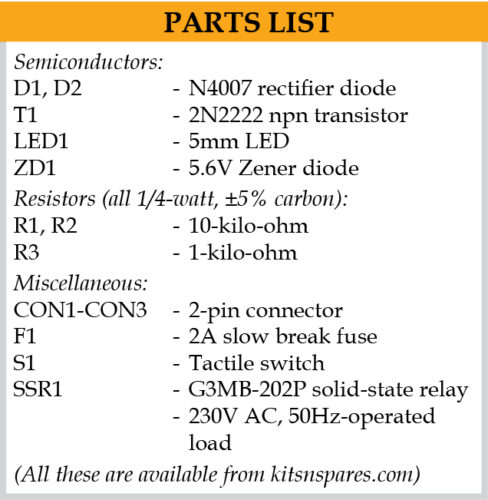 A PCB layout of the DC-to-AC SSR switch for MCU is shown in Fig. 3 and its components layout in Fig. 4. Assemble the circuit on the PCB. Connect 5V DC supply to connector CON1 to test the circuit and/or control signal from the MCU to CON2.

After successful construction, test the circuit by following the steps given below.

Otherwise, connect AC load to CON3. Load can be controlled by controlling signal input from the MCU at CON2.