The circuit (see Fig. 1) comprises Arduino Uno Board1, 16×2 LCD display LCD1, and inductive proximity sensor connected across CON2. A metal target such as a bolt-head required by the sensor for proper functioning is fixed on the rotating object such as a wheel’s rim or a wheelnut to sense the rotation.

Whenever the metal target crosses the sensor while rotating, the sensor generates a pulse. The pulse goes to the first interrupt pin (pin 2) of the Arduino through diode D1. The diode acts as a voltage level converter. Since the proximity sensor’s working voltage is 12V, its output pulse voltage is 0-12V.

The Arduino counts the number of pulses for one rotation of the wheel and converts to distance in kilometre (km) through the program. The distance is then multiplied with the rate per km to get trip fare for the distance travelled. LCD1 displays the distance and trip fare.

Before the vehicle is hired, the LCD1 displays the message “TRIP IS TO BEGIN, HAPPY JOURNEY.” When it gets hired, switch S1 is pressed and LCD1 now displays “TRIP STARTED, HAPPY JOURNEY” for half a second. Thereafter, the distance travelled and the trip cost is displayed on LCD1 continuously.

PNP type normally-open (NO) proximity sensor used in the circuit (see Fig. 2) detects objects without any physical contact up to its nominal range—the maximum distance that this sensor can detect. It has high reliability and long functional life because of the absence of mechanical parts and lack of physical contact between sensor and the sensed objects. 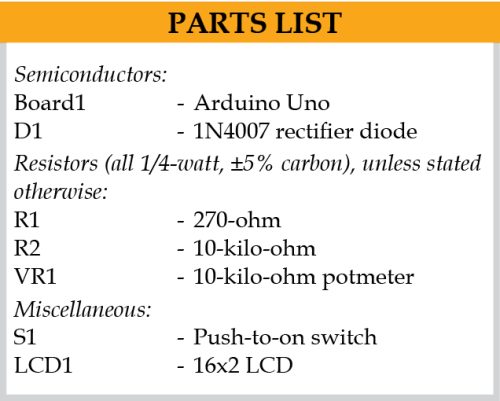