The circuit diagram of the temperature monitoring system on a smartphone is shown in Fig. 4. Components used in this project are given below.

Install the temperature monitoring app on Android smartphone. The app (temperaturemonitoring.apk) used here has been built using MIT App Inventor. When the app is running on the smartphone, data sent by HC-05 Bluetooth module is received and displayed on the app.

Arduino Uno is an AVR ATmega328P microcontroller (MCU)-based development board with six analogue input pins and 14 digital I/O pins. The MCU has 32kB ISP flash memory, 2kB RAM and 1kB EEPROM. The board provides the capability of serial communication via UART, SPI and I2C. The MCU can operate at a clock frequency of 16MHz.

LM35 series are precision integrated circuit (IC) temperature sensors, whose output voltages are linearly proportional to Celsius (Centigrade) temperature. LM35, thus, has an advantage over linear temperature sensors calibrated in ° Kelvin You are not required to subtract a large constant voltage from its output to obtain convenient Centigrade scaling.

LM35 does not require any external calibration or trimming to provide typical accuracies of ±1⁄4°C at room temperature and ±3⁄4°C over a full -55 to +150°C temperature range. Scale factor is 10mV/°C. Vout pin of LM35 temperature sensor is connected to analogue input pin A0 of Arduino Uno on the transmitter side.

On the transmitter side, LM35 temperature sensor is used to sense temperature. Arduino senses this voltage and the program (Temp.ino) running in the MCU calculates the equivalent temperature. Temperature value is sent to HC-05 Bluetooth module via serial communication.

2. Select proper COM port and board from Tools menu in the IDE.

3. Compile and upload Temp.ino source code to the board. 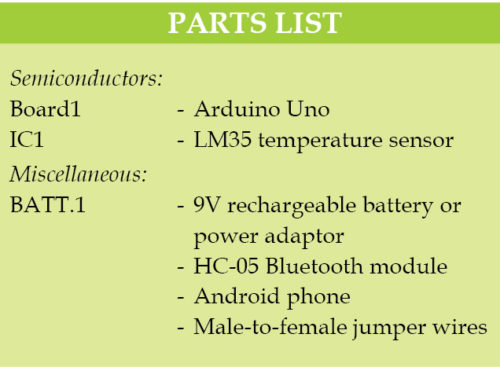 After successful pairing, open the installed application on the smartphone and click on Bluetooth logo. The paired devices list will appear. Select the HC-05 device from the list to connect the smartphone with HC-05 Bluetooth module.

After successful connection, ‘connected’ message will be displayed on the main screen of the application. Android app will start to display the data received from the transmitter side. A screenshot of the detected temperature observed on the smartphone is shown in Fig. 5.

Shibendu Mahata is M.Tech (gold medallist) in instrumentation and electronics engineering from Jadavpur University. Currently, he is pursuing PhD from NIT, Durgapur. He has a keen interest in MCU-based real-time embedded signal processing and process control systems