Touchless Doorbell For The Post-Covid World

This low-cost, simple, reliable, and effective circuit for a doorbell works without touching.

It can be quite useful in our post-Covid-19 world as it minimises the spread of virus through doorbells.

NE556 is a dual NE555 timer IC capable of producing precise time delays or oscillation. It has two independent timers. One timer is configured as an astable multivibrator (built around pins 8 through 13), which is used to drive the IR sensor circuit, and the other as a monostable multivibrator (built around pins 1 through 6) to drive the relay circuit.

The output pin 5 of IC1 is used to drive the relay, which extends AC power to the doorbell. The whole circuit is powered by a 12V DC power supply, which can be an SMPS based power supply with current rating of 500mA, or any other regulated power supply.

The circuit operates as a proximity sensor and detects nearby objects without any physical contact. When you place your hand or finger near infrared (IR) LED IRTX1, its IR light is reflected back and received by the nearby placed TSOP1738 sensor (IRRX1). As shown in block diagram of the sensor in Fig. 4, it has a PIN diode, pre-amplifier, band-pass filter, and demodulator. The epoxy package is designed as an IR filter.

The IR transmitting LED (IRTX1) is connected to output pin 9 of the first timer section of NE556 (IC1). This multivibrator generates the frequency in the range of 32kHz to 38kHz, which is the operating frequency of the TSOP1738 sensor. The astable mode is configured with resistors R1 and R2 and capacitor C4. The astable frequency calculation can be done using the relationship:

The frequency output obtained at pin 9 of IC1 is connected to IRTX1 LED through resistor R7, which controls the current flowing through the LED. The IR light emitted is proportional to this current. The value of R7 can be changed to adjust the proximity range of the system. The forward voltage of IRTX1 is around 1.9V. Zener diode ZD1 connected in series with resistor R6 is used to generate 5.1V DC, which drives the sensor.

In the monostable multivibrator section (pins 1 through 6), resistor R3 and capacitor C1 provide the necessary timing. Here the timing (on state) is around three seconds. The timing calculation is given by the relationship:

LED1 is used as a power on indicator and LED2 connected to pin 6 of IC1 through R8 is used as output signal indicator.

An actual-size PCB layout for the doorbell is shown in Fig. 5 and its components layout in Fig. 6. After assembling the circuit, connect the 12V across CON1, 230V AC mains across CON2, and 230V AC doorbell across CON3.

Enclose the circuit in a suitable box. Fix IRTX1 and IRRX1 sensors near each other facing towards the user, as shown in the prototype. When you keep your finger in front of these sensors, the transmitted IR beam is received by sensor TSOP1738 to trigger the doorbell.
Before assembling and installing the doorbell, you may refer to author’s assembled circuit shown in Fig. 7. On the left side is 12V SMPS circuit and on right side is the main doorbell circuit. Both the circuits are enclosed in a plastic cabinet. 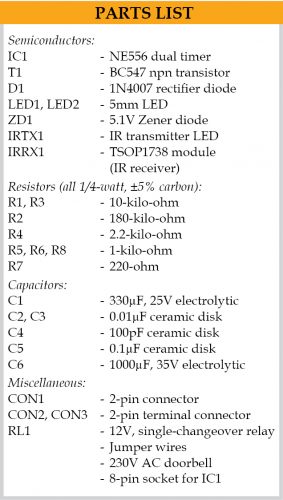 We have also designed the touchless Arduino doorbell that only rings when hands are sanitized.