Can We Create Electronic Plants?

The manufacturing of analogue and digital organic electronic circuits and devices in living plants has been reported. The four key components of a circuit (an energy source, a conductor (wire), an electrical load, and at least one controller) have been achieved.

Plants in their various forms are always an integral part of the human life system, supporting it in different ways. Plants are the primary source of food and providers of oxygen. They sequester carbon and regulate the ecosystem; technologically, they synthesise materials and convert sunlight to chemical energy. They have non-speaking human-like complex organs that rely on the transport of ionic signals and hormones to perform necessary functions for them. However, plants operate on a much lower capacity and slower time scale, thus making interacting with and studying plants difficult.

Break the barriers between the natural and the artificial

Scientists are developing bio-electronic technologies that will enable them to better understand how plants function and their biological processes. By functionalising plants with electronic materials, scientists and technologists aim to push the boundaries of knowledge and understand better the interface between the natural and the artificial.

Electronic plants in the making?

Augmenting plants with electronic functionality might make it possible to combine electric signals with the plants’ own electrical signals, based on their chemical processes. These technologies can not only be used as tools by plant biologists but can also find applications in agriculture and forestry, with today’s climate change and increasing population. According to researchers, both analogue and digital electronic circuits can be created inside living plants, be it flowers, bushes or trees, with the use of semi-conductive polymers.

Integrating electronics in plants can also play an important role towards bio-hybrid systems, plant optimisation and monitoring. Research efforts are going on in the field of template electronics to understand how plant biochemistry is affected by electronics and to make plants a part of our technology. Laboratory stage studies on plant growth in a controlled environment and development, characterisation, and integration of electronic devices and materials in plants are also underway. 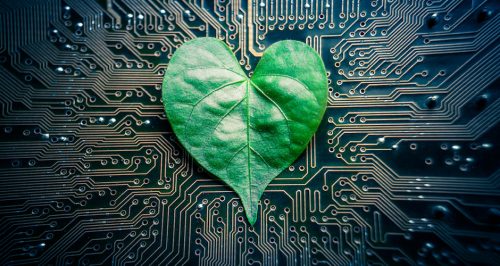 The science behind plants

The various parts of a plant such as root, stem, leaves, and vascular circuitry are responsible for conveying chemical signals as well as regulating the growth and functions of a plant. From a certain viewpoint, these features are said to be equivalent to the contacts, interconnections, and wires of discrete and integrated electronic circuits and devices.

Several attempts have been made so far to enhance plant functions with the use of electro-active materials but without any efforts to directly merge electronics with a plant’s circuitry. The tree-power activity is totally different to the popular potato or lemon experiment, in which two different metals react with the food to create an electric potential difference that causes a current to flow.

A custom circuit can be designed to store enough voltage from trees to run a low-power sensor. Scientists have found that by putting one electrode in a plant and the other in the surrounding soil, plants can generate a voltage of up to 200mV. The research team wanted to advance their research in the field of generating power from trees by building circuits to run off plant electric energy and successfully ran a custom circuit solely off tree power.

It is not established so far as to where the voltages in plants come from, but there seems to be some signaling in trees similar to what happens in the human body, while at slower speeds. Traditional electronics can send and process electronic signals whereas plants transport and handle ions and growth hormones. In case of organic electronics based on semi-conductive polymers, both ions and electrons can serve as signal carriers, which make it possible to combine electric signals with the plant’s own electrical signals, as if translating the plant’s signals into traditional electronics.

The manufacturing of analogue and digital organic electronic circuits and devices in living plants has been reported. The four key components of a circuit (an energy source, a conductor (wire), an electrical load, and at least one controller) have been achieved using the xylem, leaves, veins, and signals of the plant as the pattern and integral part of the circuit elements and functions.

With the help of integrated and distributed electronics in plants, we can imagine a range of applications including energy harvesting from photosynthesis, precision recording and regulation of plant physiology, and alternatives to genetic modification for plant optimisation.

Creation of plant bioelectronic devices will define new means for decoding and manipulating plant biology from the cellular level to the organism level. These devices will offer unique characteristics including dynamic control of physiology of plant and signal monitoring with high spatiotemporal resolution. These devices will be compatible with both wild type and genetically engineered plants.

The goal is to develop technologies with a focus on understanding and enhancing plant responses to environmental stress. Efforts to introduce electronics in plants for the paper industry originated with the idea of printed electronics on paper.

The goal is to develop technologies with a focus on understanding and enhancing plant responses to environmental stress.

From a rose to transistor

Researchers of a university in Sweden have created analogue and digital electronic circuits inside living plants by using the vascular system of living roses to build key components of electronic circuits. They have successfully demonstrated that wires, digital logic, and even display elements, when fabricated inside plants, can generate new applications for organic electronics and new tools in plant science.

The research team tried to introduce conductive polymers through rose stems and only one polymer (called PEDOT-S) successfully assembled itself inside the xylem channels as conducting wires, while still allowing the transport of water and nutrients inside the plant.

They have used the material to create long (10cm) wires in the xylem channels of the rose. Researchers were able to create an electrochemical transistor (a transistor that converts ionic signals to electronic output) by combining the wires with the electrolyte that surrounds these channels. Further, digital logic gate function was also demonstrated using the xylem transistors.

Scientists used methods common in plant biology like vacuum infiltration to infuse another PEDOT variant into the leaves; then the infused polymer formed pixels of electrochemical cells partitioned by the veins. The applied voltage caused the polymer to interact with the ions in the leaf, subsequently changing the colour of the PEDOT in a display-like device. This functioning is similar to that of roll-printed displays. However, these results are simply early steps to merge the diverse fields of organic electronics and plant science, but may lead to possible electronics plants in the near future.

Plant bioelectronics as a low-power sensor

With the growing use of electronic devices in our daily lives, scientists and engineers are also exploring ways to integrate plants’ electronic functionality with human and electronic devices. A research team has built a device that can run on available power from a plant. The circuit built with parts measuring about 130nm consumes just 10nW of power, on average, during operation.

Normal electronics is not going to run on the types of currents and voltages obtained from a tree as the nanoscale is not just in size but also in the energy and power consumption. Electric power to be extracted from plants, that is ‘Tree power,’ is unlikely to replace solar power for most applications, but the electronic output from plant bioelectronics system could provide a low-cost option for powering tree sensors that might be used to gauge a tree’s health to detect environmental conditions or forest fires.

The electronic output from plant bioelectronics system could provide a low-cost option for powering tree sensors that might be used to gauge a tree’s health or environmental conditions.

Recently, uncontrolled and devastating forest fires in the USA have forced researchers to think critically about bioelectronics, that is, creating electronic plants. A researchers’ team at MIT (USA) is investigating whether energy generated from trees can power a network of sensors to prevent spreading of forest fires. This team also claims that the technology will open the possibility of using trees as silent sentinels along the nation’s borders to detect smuggled radioactive materials, as well as provide better local climate data towards fire prediction.

Creating electronic plants can become a reality with a new technique that creates in-vivo electronic circuits. Controlling and interfacing with chemical pathways inside the plants could pave the way to various exotic applications as photosynthesis-based fuel cells, sensors, and growth regulators and devices that will be helpful to modulate the internal functions of plants.

New ways of interacting with electronic plants will help to develop applications for energy and environmental sustainability. Sensors employed in plants that make use of the energy formed in the chlorophyll will produce green antennas or produce new materials.

Dr S.S. Verma is a professor at the Department of Physics, Sant Longowal Institute of Engineering and Technology, Sangrur, Punjab