A Detector that Informs About Radiation Levels Around You

Detex 189 Cell Phone Tower Radiation Detector aims to empower people to measure the cumulative radiation levels in their immediate environment in order to take precautions to minimise their exposure to it. Due to the lack of public awareness about the harmful effects of cell-phone tower radiation, Indians are unwillingly exposing themselves to serious health hazards. Abhishek Mutha from EFY got in touch with Prof. Girish Kumar to learn more about his innovative product -- Abhishek Mutha

One thing that is increasing rapidly in India, apart from the population, of course, is the use of cell phones. Today, almost every person has a cell phone, and currently there are nearly 900 million cell phone subscribers and 500,000 cell-phone towers across the country. So, our exposure to EMR (electromagnetic radiation) is also increasing at an alarming rate. The existing number of cell-phone towers might be astonishing, but the major cause for worry are those that are yet to come up—to meet India’s insatiable demand for communications.

What is Detex?
Detex 189 has been designed to quickly detect radiation levels at a given spot, be it your home or office. “Number 189 includes GSM 1800 and GSM 900 bands. It is used to measure cumulative power in the frequency range of 800 MHz to 4 GHz,” says Girish Kumar, professor, Electrical Engineering Department, IIT Bombay, who is the creator of this product. Detex displays safe, cautionary and danger levels, as recommended by the Bio-Initiative 2007 report and further underscored by the Bio-Initiative 2012 report.

“Cell-tower radiation power can be generally measured by spectrum analysers and broadband antennae. However, these are expensive devices. Besides, they do not give the cumulative power at that location and are also not easily portable,” says Girish Kumar, informing about the main reasons that prompted him to design such a solution. He adds that it took him approximately one year to fully develop Detex 189.

Operation
The cell tower radiation detector has a planar broadband elliptical monopole antenna, explains Prof. Kumar. The antenna has been designed to cover the frequency range of 800 MHz to 4 GHz, which covers the CDMA, GSM 900, GSM 1800, 3G, 4G and Wi-Fi/WLAN/Bluetooth bands. He explains that, “The antenna is integrated with the rest of the circuit, which consists of a broadband impedance matching network, a voltage doubler circuit that uses Schottky diodes, and various threshold level testing circuits.”

A telescopic extender (monopod) is supplied with this unit to avoid any discomfort in detecting radiation seepage from ceiling or vents located high on the walls. To detect radiation levels at hard-to-reach areas, the telescopic extender should be screwed to the 1/4-20 TPI socket (located at the bottom of the unit).

One needs to hold the device up vertically at the bottom and move around the room to detect the radiation seepage from the walls, ceilings, windows, doors and vents. The device can also be used to continuously monitor and detect radiation levels. The in-built broadband impedance matching network, the voltage doubler circuit that uses Schottky diodes, and the multiple threshold-level testing circuits, work in tandem to detect the radiation level, which is then output to the device’s LEDs as programmed. 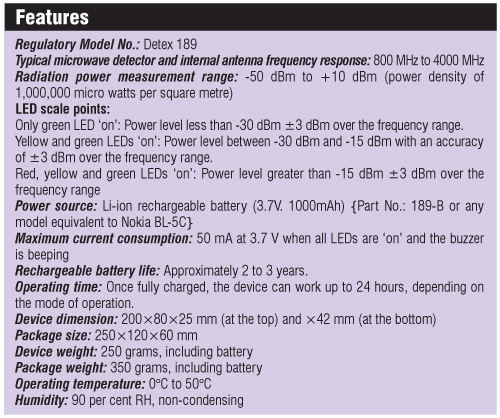 What the different LED colours mean
Indication of measured microwave power in the frequency range of 800 MHz to 4 GHz by different LED colours has been decided after interacting with hundreds of people where measurements have been carried out, and interviewing them about possible health hazards experienced by them or their family members and colleagues, Prof. Kumar reports. For radiations below -30 dBm, most people report no health problems, so this is indicated by the green LED. However, there are reports that some electro-sensitive individuals do experience adverse health effects even at radiation levels as low as -40 dBm to -50 dBm.

Between -30 dBm and -15 dBm, some individuals complain of headaches, sleep disturbances, joint pain, memory loss, stress, fatigue, skin rashes and even miscarriages over a few years of exposure, so this is indicated by a yellow LED. Above -15 dBm, many individuals have reported the above-mentioned health problems within a year of exposure and a few cases of cancer have been observed within a few years; so this is indicated by the red LED. The above health effects are based on individual sensitivity or immunity.

What to do if radiation levels are high
If cell-tower radiation is high at your premises, which is indicated by the red LED and/or the yellow LED, you can request your government or telecom regulatory body to adopt stricter radiation norms. You can also request cell operators to reduce the transmitted power, ask them to change the direction of the transmitting antenna or even remove the tower. It is possible that the above options may take time to get implemented. Meanwhile, you can take the following precautions.

“We are planning to add more features to it, such as a digital display and more LED displays,” says Prof. Kumar. He adds, “We are in the process of filing for patents too.” The product has been designed and tested at Antenna Lab, IIT Bombay. The technology has been transferred for mass manufacturing to NESA Radiation Solutions Pvt Ltd, and the product will be sold exclusively by it. The company has already sold a number of units.