IdeaForge’s Netra, an unmanned aerial vehicle built in collaboration with DRDO, has now been commercialised and is being bought by various law enforcement and defence agencies. This article delves deeper into this indigenous innovation. -- Ashwin Gopinath 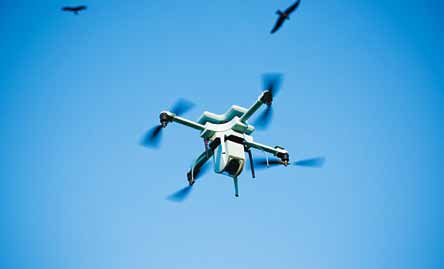 For the uninitiated, Netra is a man-portable unmanned aerial vehicle (UAV), which can be used for a variety of applications like surveillance, reconnaissance and aerial imagery. It has been designed and created by a team of five engineers, Ankit Mehta, Ashish Bhat, Rahul Singh, Amardeep Singh and Vipul Joshi, in collaboration with the Defence Research and Development Organisation (DRDO). Netra is currently being deployed for applications such as counter-insurgency, anti-terror operations, border management, crowd monitoring, disaster management (the armed forces are currently using the UAV to assist with search and rescue operations in Uttarakhand), aerial imagery, and the like.

Netra is a lightweight UAV, made of carbon-fibre composites. It uses four rotors to provide lift and control, giving it VTOL (vertical take-off and landing) capabilities. The absence of moving parts, apart from the rotors, motors and transmissions, makes Netra a very-low-maintenance device. Added to that, its low weight of 1.5 kg (in large part, due to its carbon-fibre construction) makes the vehicle easily portable.

When asked how they got the idea of this vehicle, Ankit Mehta, co-founder and CEO of IdeaForge, explains, “You will notice that the UAV employs a quad-rotor configuration. Initially, it was this configuration that gripped our imagination when we were still students at IIT Bombay. We were trying to find a way to make aerial platforms that could be easier to fly and make, even for a student. We independently worked out this configuration without any prior art reference and were genuinely excited about the configuration’s intrinsic capabilities to be a stable hovering system. Its mechanical simplicity made it look doable. Once we started our company, the demand for UAV avionics and systems really got us in the groove. We created this product to act as a last-mile surveillance and reconnaissance tool for the forces.”

How it works
The Netra UAV is a VTOL quad-rotor configuration, which is stabilised by the BlueFire autopilot developed by IdeaForge indigenously. A completely autonomous system that requires no prior flying experience for an operator, it is controlled through a ground control software application, which has an intuitive graphical user interface. The operator only needs to point and click on the satellite map displayed in the software application, to navigate the UAV. Netra keeps sending live video footage to the ground control station, which helps the operators to plan their moves based on the aerial video data received.

Ashish Bhat, co-founder and CTO, adds, “The level of autonomy in Netra is very high, allowing hands-free operation, once it has been commanded to go to a specified destination. There are several levels of fail-safe modes, like the low battery fail-safe mode and the communication loss fail-safe mode. In case of low battery, it automatically comes back and lands by itself. In case of a communication failure between the vehicle and the ground control station, it starts coming back, and when it regains communication it starts hovering and waits for the next command. So, it is obvious that we have tested and made it as fail-safe as possible.”

Netra can be operated during the day and at night. This is made possible with a 10x zoom payload for daylight and a thermal imaging camera for night operations. The payload itself can tilt while the aircraft can pan the camera to get a full 360-degree view.

So how did the team solve the reliability issues most often encountered with systems of this nature? Rahul Singh, co-founder and CTO, responds, “We attribute the reliability of the system to the use of highly advanced, innovative and integrated inertial sensors from Analog Devices that offer 10 degrees of freedom. The reliability worries were also addressed with an all-in-one device which included a three-axis gyroscope, an accelerometer, a magnetometer and a pressure sensor. As we know, gyros, accelerometers and magnetometers are essential technologies to maintain orientation and track position, tilt, direction and rotation along all the three axes with dynamic feedback to provide accurate motion measurements—a must for a superior and reliable autopilot. These sensors were invaluable when furnishing the final working prototype.”

The challenges faced
Developing an indigenous solution usually involves facing uniquely Indian challenges that, in turn, require indigenous solutions. Speaking about the challenges, Amardeep Singh, chief marketing officer, shares, “While we started work on the quad-rotor when we were in college, we took it up seriously only in 2008. After that, it took us about a year-and-a-half to deliver our first commercial system. Developing an aerial platform requires multi-disciplinary skills that are difficult to master. It has been through a lot of experimentation and analysis that we have been able to ensure that we offer a reliable and competitive product. The communication range, endurance and payload weight are typically the most common yet also the most difficult problems to crack in a UAV.