When the sensor is placed on someone’s wrist, it can measure that person’s pulse wave as it reverberates through the body. Apart from the main peak and the recoil, the highly-sensitive device also detects another tiny bump in the tail of the graph, which could also be useful information.
Web: http://news.stanford.edu/news/2013/may/skin-heart-monitor-051413.html

Unmanned storm chasers
Storm chasing is a perilous job. As an alternative to manned aircrafts chasing storms to gather meteorological data, three teams of students led by Professor Jamey Jacob at the Oklahoma State University (OSU) have developed three concept storm-penetrating air vehicles (SPAVs) capable of penetrating thunderstorms right up to the super-cells that generate the tornado. If productised, these drones could collect data that would help storm trackers and researchers to understand tornadoes better. 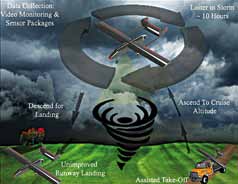 Inside: The SPAVs meet several preset standards. They are designed to be able to take-off from a traditional road even in bad conditions like 35km-per-hour winds with gusts up to 45 km per hour, fit inside a standard flatbed trailer, and fly for at least four hours at 1.5 km (5000 feet) without refuelling. They have also been designed to carry and drop one or more dropsondes (cylinders full of sensors) into the tornado for collecting data about temperature, humidity, wind speed and wind direction. Older forms of data collection use the Doppler radar, which provides information about moisture levels but not temperature gradients, pressure levels, etc. However, sensors in dropsondes should hopefully be able to collect more thermodynamic and meteorological information that could possibly reveal more about the nature of tornadoes.

OSU is negotiating with its partners, including the University of Colorado at Boulder to further these designs into full-fledged development.
Web: https://news.okstate.edu/press-releases/2186-osu-students-design-tornado-chasing-uavs

40Gbps Wi-Fi technology
Researchers from the Fraunhofer Institute for Applied Solid State Physics and the Karlsruhe Institute for Technology recently demonstrated a wireless technology capable of data uplink speeds of 40 Gbps at 240GHz frequency. This is roughly 137 times faster than the current 802.11n (Wi-Fi) standard, which supports speeds of up to 300 Mbps. In layman terms, it would help you transfer several high-definition movies wihin a second! The technology is also capable of transmitting across a large range of 1 km. The team showed the results by transmitting data from one skyscraper to another. Part of the European Millilink project, the research is funded by the Federal Ministry of Education and Research. Firms like Siemens are also assisting in the research, hoping to commercialise the design in the coming years. 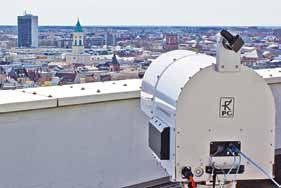 Inside: Wireless components fit into a single, small chip, making the technology suitable for use in smartphones, laptops and other mobile devices. The active transmitter and receiver design fitson a 4×1.5mm2 integrated circuit (IC), designed using special high-electron-mobility transistors.

The researchers managed to make the chip so tiny by using very high frequencies in the 200-280GHz band as compared to today’s 2.4 or 5GHz Wi-Fi. Higher frequencies mean smaller components, since a shorter wavelength can be picked up by a smaller antenna. Moreover, the number of bits that can travel over airwaves is inversely proportional to the wavelength. So a shorter wavelength means this high-frequency technology can push much more data too. The antenna also has excellent signal fidelity.

One of the team members explained in a press release that the new design showed low attenuation in this frequency range, which enabled broadband directional radio links. This makes the radio link easier to install than free-space optical systems for data transmission. It is also more robust in poor weather conditions.
Web: http://www.kit.edu/visit/pi_2013_12950.php

Adaptable and flexible ‘soft-modem’
At the heart of NVIDIA’s Tegra 4i mobile processor for mainstream smartphones is its integrated i500 LTE modem that is capable of working through 100-150 Mbps of LTE data. NVIDIA’s i500 modem is based on the software-defined radio technology developed by Icera, which NVIDIA recently acquired. 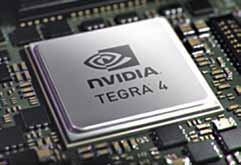 The i500 is highly adaptable and flexible, making it easy for carriers and OEMs to update modem features and to take advantage of performance-improving algorithmic innovations in the field through over-the-air updates. The modem is also tiny—ust about 40 per cent the size of conventional LTE models—as it is designed with general-purpose deep execution processors. It is also multi-mode—it delivers 4G LTE Advanced and is backward compatible with LTE Cat 3, 3G and 2G too.

Inside: In conventional modems, most features are implemented in silicon, which results in a large die size and limited flexibility. The 500 overcomes these issues with software-defined radio technology, which not only spports the latest wireless protocols such as DC-HSPA+ and LTE but also provides the flexibility o being fully programmable to support next-generation interfaces and standards. The i500 is considered by many experts as the most software-based modem in the market, compared to similar claims from companies like Qualcomm.

In the case of the i500, the entire digital baseband is just one big platform, on top of which the software can be run. There is an external transceiver for down-conversion but beyond that it is pure software. The i500 uses TSMC’s 28nm high-performance, high-K metal gate processThe i500 features a small footprint and a high-performance process, yet conserves power by turning off blocks that are not in use—compared to a larger system-on-chip (SoC) with lower leakage. As a result, NVIDIA’s i500 claims a 40 per cent smaller die than Qualcomm’s MDM9x15.
Web: http://www.nvidia.com/object/i500-cellular-modems-products.html