Nothing Can Hold Back Innovators

Where there is a will, there is a way. When you have an idea and the guts and gusto to work on it, the tech ecosystem will eventually provide you what is needed to carry your idea to fruition. When you have the conviction, the means will fall in place—whether in the form of a government fund, a science fair, or the full support of intellectual parents and a teacher as in the case of teenage scientist Eesha Khare. if you have an idea, believe in it, work on it, and explore the alternatives, you are bound to succeed. once again, this month’s collection of inspiring innovations will provide you more food for thought... -- Janani Gopalakrishnan Vikram

New anti-gravity 3D printer
Most conventional, additive 3D printing technologies use materials and techniques that are affected by the laws of gravity as well as the smoothness and inclination of the working space. So they generally work on a horizontal surface, gradually building from the ground up. 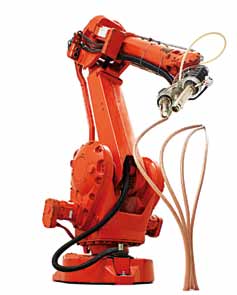 Mataerial, a new 3D printer, uses an innovative extrusion technology that can neutralise the effect of gravity during the process of printing. This enables creation of 3D objects on any surface, on slopes or even hanging from the roof. Further, Mataerial creates objects by combining 3D curves instead of 2D layers, enabling greater control over the fabrication process and replication of exact stress lines of a custom shape. It is also possible to manufacture structures of almost any size and shape.

Inside: Mataerial has been developed through a collaborative research between Petr Novikov and Saša Jokić from the Institute for Advanced Architecture of Catalonia (IAAC) and Joris Laarman Studio. It features a robotic arm equipped with a nozzle that extrudes a special, quick-drying polymer, which enables what the team calls anti-gravity modelling (patent pending). The polymers harden in mid-air and are not affected by gravity, so no support structure is required for these models. Movement capabilities of the robotic arm enable the device to create more natural 3D curves and larger objects than is possible with conventional 3D printers. The technology allows injection of colour dye in CMYK mode. It is possible to control the colour of the formed path.
Web: http://www.mataerial.com/

Battery that charges up in half a minute
Some years down the line, you could be using cell phone batteries that charge within seconds, thanks to a little device demonstrated by 18-year-old Eesha Khare of Saratoga, California, at the Intel International Science and Engineering Fair, where she won the Intel Foundation Young Scientist Award of $50,000. The device is tiny, flexible and capable of holding more power than regular batteries, for a longer time. While Khare demonstrated the device to power an LED light, she claims it can be comfortably used within batteries for cell phones, roll-up displays, clothing or even electric cars. News reports claim that Google called her soon after her win, to discuss future plans!

Inside: Khare’s device is a solidstate, highly-efficient battery that can bend and fold. It can be seen as a supercapacitor designed and created with a special nanostructure that allows it to store significantly more energy while charging very quickly. These are used in most electronic devices to help regulate the flow of electricity.

Khare has demonstrated that supercapacitor can also be used as a battery. The teenager has managed to make her supercapacitor extremely small and fexible using nanotechnology. Apart from storing much more energy, the device also has a long life—it can handle 10,000 recharge cycles as against 1000 in the case of normal rechargeable batteries.
Web: http://www.intel.com/content/www/us/en/education/competitions/international-science-and-engineering-fair/winners.html

Wearable, skin-like heart monitor
Prof. Zhenan Bao and his team at the Stanford University have developed a tiny, paper-thin, extremely accurate sensor to monitor a person’s pulse. According to the university’s press release, the device is made by combining layers of flexible materials into pressure sensors, and is thinner than a dollar bill and no wider than a postage stamp. With this, it would be possible for doctors to continuously track heart health and detect cardiovascular problems accurately and quickly. 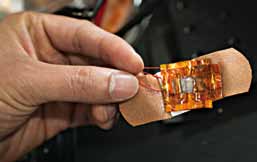 Inside: When you place your thumb on your wrist, you feel a constant beating, which is your pulse. Each of these beats is actually made up of two distinct peaks, which we cannot make out. The first is from your heart pumping out blood, and the second is from the reflecting wave sent back from the lower body to the artery system. The first is long and the second short; the relative sizes of these two peaks can be used by doctors to measure various factors of heart health, such as the stiffness of the artery.

The small and flexible device developed by Bao’s team is sensitive enough to monitor both the peaks. The device, which is to be taped on using a simple Band-Aid, has a thin middle layer of rubber covered with tiny pyramid bumps. Each mould-made pyramid is only a few microns in size.