Promethean Spenta Technologies Pvt. Ltd. has come up with an innovative product called Rapid Milk Chiller for people in the rural areas. This is a smart FPGA-controlled product that can help people to preserve milk in areas where there is no electricity available for 24 hours a day without any need of a diesel generator backup. -- Sneha A 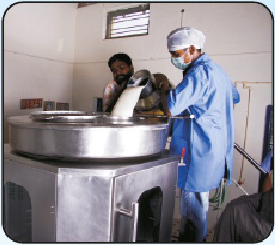 Most places in India, especially the villages in the country are suffering from acute power shortages. On top of that, natural calamities only add up to their misery. Some places do not have electricity for 24 hours a day and at times for 3-4 days a week due to power failure. This makes it difficult to run any business, especially a dairy business that deals with a highly perishable product like milk.

Sorin Grama, 44, CTO at Promethean Spenta Technologies Pvt. Ltd. was running a market study in rural India, along with his team, when he was introduced to this problem by Bangalore Dairy in 2007. He extended his working skills in energy storage and refrigeration to bring a product that could resolve this issue and help both the dairy business and the common people. This led to the creation of a magical product-‘Rapid Milk Chiller’.

Overview
While there is a similar product called Bulk Milk Chiller (BMC) already available in the market for a long time but the real challenge is that it runs on diesel generator. It makes it highly expensive both in capital and operating cost, specially in India. This is why many BMCs are not available at the village levels.

The Rapid Milk Chiller has been designed from the ground level for the Indian dairy industry. The system works on thermal energy backup technology and is controlled by an embedded control and acquisitions device. Thus, it does not need any diesel generator backup and allows the milk to cool rapidly, thereby eliminating its chances of getting perished.

The work on this product was started in 2007 and now in 2013 it is finally in the production stage.

How it works?
Sorin’s team has developed this chiller into a smart self-controlled FPGA-based system. It allows remote monitoring of the system status through cellular technology, and has an on-board control system which works based on the inputs from a custom sensor interface board.

For starters, this system enables remote monitoring of the system operation via short messaging service (SMS). This helps them to quickly determine if the system is down and to have a repair technician sent quickly. It also allows them to gather some information essential for their customers like operating cost, amount of milk chilled, etc. This being a mission critical application, connectivity is a key feature for the operation of such remote applications.

The control systems also monitor and control temperatures. These temperatures are acquired using a custom sensor interface board designed to control the system. To facilitate control, the team at Promethean used a few proprietary software algorithms running on LabVIEW RT and LabVIEW FPGA on an embedded control and acquisitions device like the NI sbRIO-9606 board. For the control hardware, they uses Solid State Relays (SSRs) claiming that they are more reliable.

The Rapid Milk Chiller has a thermal battery backup system that solves the problem of the unreliable electricity. This battery is not an electrical battery, however, it is thermal and stores thermal energy. To be specific, it stores energy in the form of ice, something that is ideal for refrigeration applications because energy is required for the transition of a substance from one state to the other (solid to liquid and vice-versa).

Besides the battery, the Rapid Milk Chiller system includes components such as a rapid heat exchanger for rapidly cooling milk and a smart control system for monitoring and controlling the entire system. This is basically a turnkey system that can be installed in any village in India. We are selling these to dairies who want to collect high quality milk or want to expand to more remote villages. The dairies will install the systems in villages where farmers can use them.