When a third of the world’s visually impaired reside in India, it made perfect sense for IIT Delhi and the Saksham team to design and test an affordable device to help such people. SmartCane comes with an assortment of features and still manages to retail at an affordable price. --Dilin Anand is a senior assistant editor and Sneha Ambastha is a technical journalist at EFY

The first set of design and development activity for SmartCane started in 2005 at IIT Delhi, by a team led by Dr Rohan Paul. Based on a concept demonstration shown in 2006, the team was able to improve the design and conducted trials until 2010. Translational research was done for two years until 2012, which was followed by validation and field trials. Eventually, necessary certifications were secured, and the device was released in 2014.

Another very important aspect was the close involvement of end users in testing and every other aspect of the technology.

SmartCane works as an electronic mobility aid, and fits on top fold of the white cane. It aims to solve the single greatest problem of using a cane—its ineffectiveness against detecting objects/movements above the knee and hanging obstacles.

It uses ultrasonic sensing and ranging to detect objects before these come into physical contact with the cane or get close to the user. Obstacle-detection features are built based on sensing, and the cane can successfully detect objects up to three metres away.

A challenge came up when two SmartCanes came in close proximity of each other; it created interference between the two. However, this was solved to a reasonable extent by adding some filters to the signal detected by sensors.

To alert the user about potential obstacles, the device delivers vibro-tactile feedback through an ergonomic grip on the handle. Depending on the message to be conveyed, the feedback is sent in a variety of vibrations that are easy to comprehend.

As with any electronic device, charging is an aspect that affects long-term user experience. SmartCane comes with a no-hassle charging system that is easy to use. It also comes with the training methodology in audio DAISY format, Braille format and tactile graphics, which allows users to learn on their own.

Extensive field trials and trainings were held by Piyush Chanana and Supriya Das in more than six cities in India, with close to 200 users.

How it stacks up against alternatives 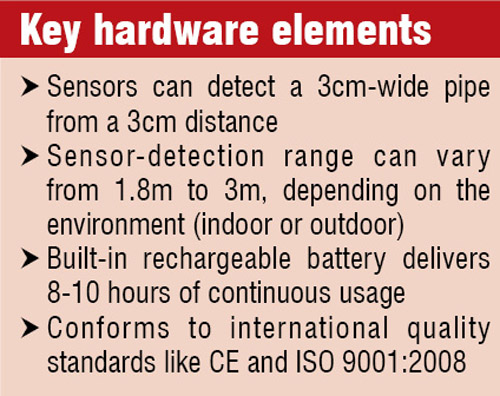 Similar products in the market not only cost more (price of international products exceeds Rs 65,000) as compared to SmartCane, which costs Rs 3000, these are also not suited for Indian conditions.

For instance, LaserCane from the USA requires highly-developed skills and the enabler of this cane, laser, is itself a concern for people.

Ultra Cane from the UK has a different gripping style that cannot be modified. It produces vibrations on buttons and constrains the user with a single grip. This makes the product inconvenient for long-term usage.

K-Sonar, a product from New Zealand, requires headphones and a modified grip to be used at all times. It also includes a cord that runs from the device to the headphone.

Australian MiniGuide requires both hands to be used at the same time as it requires holding different objects.

Since the current cane is designed for, and tested by, adults, the team behind SmartCane is thinking about modifying its design to make it user-friendly for children too.

Another angle they are exploring is how this cane can be used to help people with multiple disabilities. Basically, the team is aiming to holistically solve the challenge of navigation for the visually disabled by leveraging several existing technologies and packaging it into one reliable device.