MoPure from Realment Labs is a touchless water dispenser that helps to reduce the spread of infections through taps in common establishments by dispensing drinking water when the user just places his hand over the sensor.

Inspiration for the touchless water dispenser

The first scene of the movie Project Almanac inspired Realment Labs team to experiment with touchless and gesture control technologies. The scene shows three nerdy friends flying a drone using just their hand gestures, without touching a button or a joystick. This left Bhriju Chadha, CTO and CEO of Realment, in absolute awe of the technology.

Chadha had seen similar gesture control devices such as the Kinect earlier, but those were restricted to a larger part of the human body. He began researching various other available technologies to see if they could finetune them to a further finger-level control.

After some experimentation and pilots in the previous job, Realment started gesture control services for response-based marketing for their clients, using platforms such as XTR3D, Leap Motion and Kinect combined with the Internet of Things (IoT). Initially, the goal was to put up a great show for an audience to market a brand in offline events. However, they wanted to deliver more ‘wanted’ value. They wanted to make a solution that solved a higher-value problem for the masses. That’s when they decided to pivot into preventive healthcare using touchless technologies. 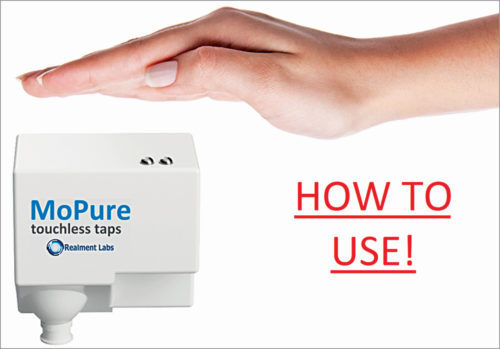 Initially, Realment had no idea what to develop. They just wanted to get into the hygiene space using touchless technologies to prevent infections. One day, Chadha asked his wife, “What do you think would be more useful for you at home or at your office if you did not have to touch it?” She replied, “Washroom taps, dustbins and drinking water dispensers!”

We have already seen foot-operated dustbins and even sensor-based dustbins that have not done well in the market. Touchless equipment has been prevalent for many years now in washrooms of malls, hotels and offices all over the world. But Realment could not find anything for the drinking water segment.

So they asked many more people the same question. Again, the top three answers were the same. This gave them some confidence on the problem area they wanted to address.

Chadha made the first prototype at home using Atmega-based Arduino and key mechanical components at minimal cost. They interacted with over 1400 urban decision-makers via phone, WhatsApp, emails, surveys and even exhibitions to get the feedback about their amateurish looking prototype. To their relief, more than 90 percent of the people acknowledged the problem and liked the concept. They recorded the responses and feedback, evaluated what they could do to improve the product, took help of a business consultant to understand the market and applied for a provisional patent.

That is when Chadha quit his job and together with Mohith Manjunath, an already seasoned entrepreneur with over nine years of experience, formed Realment Labs to produce and market MoPure touchless dispensers for drinking water.

Nowadays, there is an inclination towards touchless technologies, both locally and globally, because monitoring and enforcing a hand-washing culture is very difficult both in developing and developed nations. You may not know what infections other people are carrying. Most people do not wash their hands after coughing, using toilets, handling cash, using ATMs and so on. As a result, washrooms are now being equipped with touchless faucets, soap dispensers and hand dryers. Some airports, western hospitals and universities also have touchless drinking water fountains and bottle filling stations.

MoPure from Realment Labs helps to reduce the spread of infections in common establishments by dispensing drinking water through a tap when the user places a hand over the sensor. It is food-grade and tested by a water-quality lab. You might have used similar systems in some washrooms. However, MoPure is different! 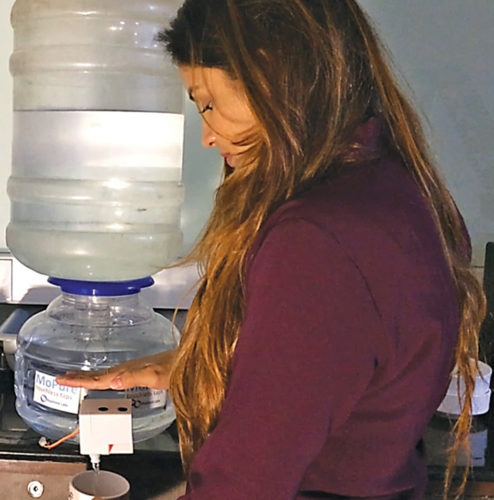 Existing touchless systems have limitations when used with drinking water at low pressure and in portable systems. MoPure overcomes these limitations. It is cheaper, safer, convenient and highly compatible with the most commonly used drinking water dispensers globally. It also provides convenience in households, especially while cooking and handling uncooked food.

The MoPure touchless dispenser package includes a storage container (capable of holding a 20-25-litre water can), integrated touchless tap unit (removable for cleaning) and a 5V, 2A DC power supply adaptor. It uses proprietary mechanisms to control the flow of drinking water externally using a microcontroller and electromagnetic actuators.

Negotiating with investors to retain maximum control over the company was a highly time-consuming process. On top of that, closing deals with organisations and corporates is a long bureaucratic process in some cases. Organisational clients take time to trust startup products and delay their payments.

Future challenges in retail might even include a fight over shelf space. Consumer goods startups would require the financial muscle to get into that segment.

The innovation has been recognised by DIPP Startup India and Karnataka Biotechnology and Information Technology Services (KBITS). It is supported by DERBI Foundation, an incubator affiliated to The Department of Science & Technology (DST). MoPure was among the top ten finalists in Headstart Kickstart contest held in May 2017 in South India.

The company has exhibited beta version of MoPure in big trade shows such as India Manufacturing Show and Invest in Karnataka. They have received over a thousand pre-production inquiries from distributors, offices, factory owners, gyms, schools and individuals and are currently closing orders for their market version. 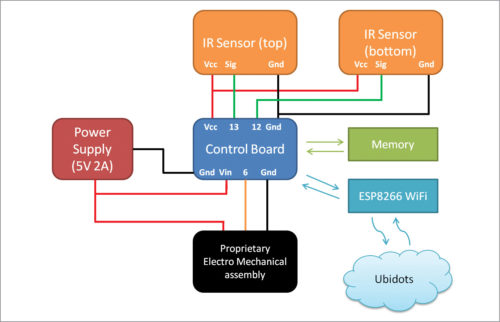 Realment wants to create a culture of improved sanitation in the drinking water ecosystem and educate the public about touchless solutions. To deliver a social impact, they are looking to collaborate with organisations and individuals who would like to contribute to the implementation of this touchless healthcare solution in various parts of India in government schools, hospitals, offices and rural establishments.